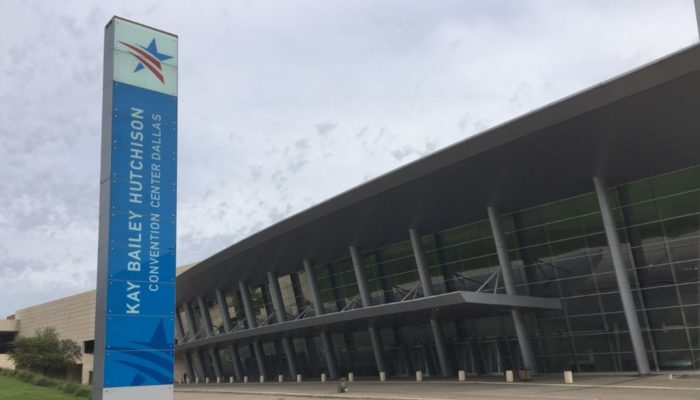 Jenkins responded to a letter from Gov. Greg Abbott’s chief of staff alleging that the county no longer wanted to use the convention center as overflow hospital space. The county judge said that assertion isn’t true.

The letter, which Jenkins said he received from a reporter first, said the governor’s office learned that the county judge was not going to accept federal resources to establish hospital space at the convention center.

Jenkins said the claim was a result of a misunderstanding on the “telephone gossip tree.” He said the county still intends to set up hospital beds at the center but doesn’t need them yet.

Another 97 have tested positive since, health officials said Sunday, bringing the total case count to 1,112 in the county.

RELATED: Need help in North Texas because of COVID-19? Here are the numbers to call

How are you feeling with all this? Call our voicemail line and tell us

For a lot of us, it’s now been about three weeks at home and we are settling into whatever…this is.

A few of you are talking about what it means to actually go into work, but it sounds like your world is feeling pretty small. We’re also hearing people say in this time of darkness, kindness abounds.

Thanks for the comments. If you keep talking, we’ll keep listening.

American Airlines announced new schedule limitations that will limit flights out of LaGuardia (LGA), JFK and Newark Liberty International (EWR) airports that include stops at DFW International airport. The new schedule will go into effect starting Tuesday, April 7 and will last until May 6.

The schedule is as follows:

Jenkins responded Sunday to a letter he received today from the governor about the county’s usage of the Kay Bailey Hutchison Convention Center.

He said he doesn’t want to move people from conventional hospitals to the convention center until it’s necessary.

Jenkins repeatedly said his cellphone number has not changed and expressed frustration that no one from the governor’s office called him to clarify whether he intended to use federal resources for the convention center.

Watch the full news conference below.

A man in his 90s who was a resident of a Lewisville nursing home died from COVID-19, county officials said Sunday. He had been hospitalized due to the illness.

Sixteen additional cases were also reported in the county, bringing the total to 304 confirmed cases since the outbreak began.

Fourteen more staff members of the Denton State Supported Living Center have also tested positive. Eight of them live within Denton County, while six do not. The total number of staff infected with the disease is now 39, while the number residents at the facility who’ve tested positive remains at 50.

“As we report the loss of a seventh life to COVID-19 in Denton County today, we hope everyone will take a moment to keep our fellow residents affected by this pandemic in your thoughts and prayers,” said Denton County Judge Andy Eads. “The seriousness of taking precautions cannot be overstated.  With community spread endemic in our county, we must take the necessary steps to ensure we do not contribute to the problem.”

Dallas County health officials reported 97 new positive cases of COVID-19 on Sunday, bringing the total number of cases in the county to 1,112.

RELATED: What is an underlying health condition or issue for COVID-19?

Of those that have needed to be hospitalized, 71% have either been over 60 years old or have had a known high-risk chronic health condition.

Diabetes is one such prevalent condition, with 28% of the county’s hospitalized COVID-19 patients suffering from it, according to health officials.

One of those who died was an elderly woman who had been a resident of the Heartis Arlington senior living center. She had been hospitalized since she became ill, health officials said.

The senior living facility has had a total of 12 positive cases, 11 among residents and one in a staff member, health officials said. They were placed under self-quarantine and being monitored by the county’s health officials.

Tarrant County Public Health Director Vinny Taneja said the department began an investigation at Heartis Arlington after officials were notified of a positive test in late March. Health officials said they then began to take certain measures to prevent the disease from spreading.

“Some residents were isolated, preventive and infection control measures were taken and we identified groups of people that needed to be tested, which included most of the residents and staff,” Taneja said.

An elderly Fort Worth man was the other victim of the disease, officials said. He had had underlying health conditions, according to officials. He died in a local hospital.

Health officials believe both the man and woman contracted the virus through community transmission.

As North Texas surpasses 2,000 cases, the young suffer too

The novel coronavirus has continued to spread throughout North Texas, with more than 2,000 cases reported across the region. More and more are getting tested, and as the results come back, the virus has been shown to be hitting younger people hard, even if they have no underlying health conditions.

Health officials announced two different deaths on Saturday, both involving a man in his 30s with no known underlying conditions. One was a Dallas man who had been critically ill at a local hospital while the other was a Haltom City man.

So far, at least 18 people have died from the disease in Dallas County, while the death toll stands at 11 people in Tarrant County.

Even when the disease is not deadly, it can be excruciatingly brutal, 39-year-old Ben King told WFAA.

A perfectly healthy athlete before his bout with the disease, King didn’t know if he would survive the virus.

RELATED: A warning to young people from a COVID-19 survivor

“When it hits you, it hits you fast and it hits you hard,” King said. “Laying in that hospital bed the first two nights I really thought that I may not make it out of there.”

His wife Kristin, a former ICU nurse, saw first-hand how serious the symptoms can be at any age.

“His temperatures were so high, he could barely speak,” she said. “His body was just shivering from all the ice we were having to pack him down with. The pain was so excruciating, he couldn’t open his eyes. His headaches were so severe.”

About 60% of Dallas’ ICU beds are occupied

More than half of Dallas’ hospital beds are currently occupied, data from Mayor Eric Johnson’s office suggests. Of the available ICU beds, 60% are occupied, while about 35% of hospital ventilators are in use.

Two hospitals that reported on Friday did not send in new numbers Saturday.

Johnson says the data is meant to inform residents about the medical community’s capacity to handle an expected increase in COVID-19 cases and hospitalizations.

Below is a list released by the mayor’s office of the aggregated totals from 19 hospitals in the city:

Johnson’s office noted that several hospitals reported increased capacity on Saturday and said facilities may be able to expand bed capacity if needed.

These are the hospitals that reported to the city on Saturday:

Avoid close contact with people who are sick.Practice “social distancing” and stay at least 6 feet away from others and avoid large public gatheringsAvoid touching your eyes, nose, and mouth.Stay home when you are sick.Cover your cough or sneeze with a tissue, then throw the tissue in the trash.Clean and disinfect frequently touched objects and surfaces using a regular household cleaning spray or wipe.Follow CDC’s recommendations for using a facemask.Wash your hands often with soap and water for at least 20 seconds, especially after going to the bathroom; before eating; and after blowing your nose, coughing, or sneezing.If soap and water are not readily available, use an alcohol-based hand sanitizer with at least 60% alcohol. Always wash hands with soap and water if hands are visibly dirty.Consult CDC’s travel website for any travel advisories and steps to protect yourself if you plan to travel outside of the U.S.More on WFAA: