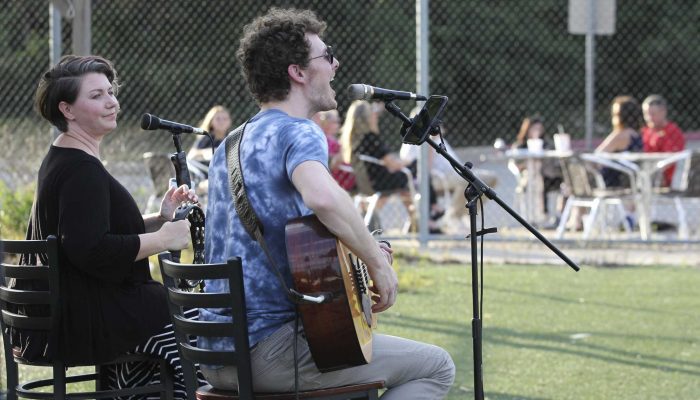 Of all the gigs Tabatha O’Connor and Michael James Carey have played as the acoustic duo Ceasefire, the San Antonio couple will always remember their socially distant shows behind a chain-link fence.

Since Cinco de Mayo, Ceasefire has played every Thursday night outside the Anchor Bar restaurant off North Loop 1604 West, caged off in a former outdoor playground surrounded by more than a dozen fans downing beers and buffalo wings, all spaced apart at tables and every other parking space like the world’s roomiest tailgate party.

Not that anyone’s complaining. After nearly two months of shelter-in-place orders intended to slow the spread of COVID-19, live music is finally making a cautious comeback to San Antonio as those restrictions start to be lifted. Just not on the city’s usual stages.

But with many large and small music venues still closed, some performers have turned to curbside shows and other outdoor shindigs where smaller audiences can still get a taste of live entertainment at a safe distance.

“A full house nowadays is not a good thing,” said Julian Escobedo, a bass player by trade who runs the Facebook group San Antonio Musicians Network with more than 3,800 members. “And I can’t sing with a mask on.”

On ExpressNews.com: San Antonio bars can reopen Friday, restaurants can serve more people under phase 2 of coronavirus reopening in Texas

Escobedo, who once played and toured with the late Tejano legend Emilio Navaira and now focuses on ’70s and ’80s music as a solo guitarist, said he and most musicians are still in wait-and-see mode when it comes to playing again for crowds.

Escobedo chalks that up to caution and uncertainty on both sides of the microphone.

Musicians want to play it safe and make sure their audiences are safe, too. Meanwhile, the few businesses that can host live music right now are mostly restaurants, though some bars may join the mix starting Friday, when they can open at 25 percent capacity. Still, such limited capacities leave little in the budget for hiring entertainers.

San Antonio has about 100 music venues ranging in capacity from 50, such as Candlelight Coffeehouse, Wine Bar & Cafe on the St. Mary’s Strip, to 70,000 at the Alamodome, according to San Antonio Sound Garden, a nonprofit dedicated to promoting music education in the city.

For now, Escobedo considers outdoor gigs nice work for musicians if they can get it.

“For me that would be the way to go … if a venue has an outdoors space to make accommodations for them,” he said.

O’Connor and Carey started playing outside Anchor Bar earlier this month and have since become a Thursday night fixture. Still, it’s modest work compared to Ceasefire’s usual performance schedule before the pandemic.

“We went from playing five or six shows a week to zero,” O’Connor said. “It’s been really great to have an opportunity to be able to do it safely, so soon. Because to be honest, I wasn’t so sure this was going to happen for a long time.”

Like other musicians, Carey and O’Connor livestreamed from their living room to make some money. But it just wasn’t the same, physically or financially, as playing before a live crowd.

“It was not as intimate, outwardly,” O’Connor said with a laugh. “We didn’t lose music altogether. We just lost the together. It became virtual.”

Judging by the crowd reaction to Ceasefire on a recent Thursday night, music lovers are just as thrilled as music makers to be together again, even if far apart.

“Just being outside, seeing people and hearing live music, it’s great to see them back,” said Garret Muñoz, who was back at the Anchor Bar parking lot after catching Ceasefire the previous Thursday.

“It’s great because you’re outdoors, you feel safe,” said Jennifer Bise, who with her husband, Roger, was drinking in the live music, along with some Coors Light.

O’Connor said she’s seen only a few musicians perform live since the coronavirus first closed venues in March, and those were just the occasional livestream from a ranch or hotel.

“Unless it’s outside,” Carey said, “you probably won’t see it.”

Bob Charles can relate. A longtime roots rocker in San Antonio, Charles was playing weekends at the Tex-Mex restaurant La Hacienda de Los Barrios before the pandemic cleared his calendar.

“I feel unbelievably lucky,” Charles said. “Music for me has always been like a medicine, whether I’m listening to it or playing it. It’s just so central to my life and important. And I’ve always felt like it has that ability to take us away from our problems, although be it temporarily.”

The people booking the live music also see the benefits.

Joe Snyder, who owns the Anchor Bar location in San Antonio as well as the one in Schertz, said the reaction to Ceasefire has been so positive, he not only made them Thursday regulars but also added a second day of live music with a “Sunday Funday” in the afternoon.

“Maybe we’ll add some other dates, too,” Snyder said.

Owner Louis Barrios stressed that La Hacienda is first and foremost a family restaurant. But he sought out full-time musicians such as Charles to help those who make music their livelihood.

“Keep in mind musicians are subcontractors, so they’re small business USA,” he said. “So they have taken it very hard during this pandemic crisis.”

On ExpressNews.com: Here’s why you may see San Antonio bars with lights on and music blaring Friday night

As they did before the pandemic struck, musicians have to hustle for work.

Late last month, Alvin L. Gertman posted on Facebook that his old-school R&B band Big Al & Nuthin Nice was available for “backyard boogies so we will be able to practice social distancing.”

The all-caps shout-out landed Gertman three private gigs, which he considers bittersweet but better than, well, nothing.

“It’s helped but it’s kind of sad,” said Gertman, who’s sung R&B in San Antonio for 30 years. “Even after the gig’s done, I’m not able to shake hands and hug. … And I’ve got a bad habit of jumping off the stage and getting into the crowd.”

Gertman said his backyard boogie crowds appreciate his willingness to come out and perform during this time and that it’s been an uplifting experience. Still, he remains cautious, to the point that he’s looking into using a plexiglass shield onstage.

“This is something really scary,” Gertman said. “That’s why I went to the direction of backyard boogie, because I feel safer outside.”

O’Connor understands the health concerns all too well. She said she has stage 4 cancer and is at great risk if she contracts the coronavirus.

Yet even with cancer in the midst of a pandemic, O’Connor said she’s no longer as scared as she was before, thanks to being able to get back to doing what she and Carey love.

About the Author: By René Guzman, Staff writer