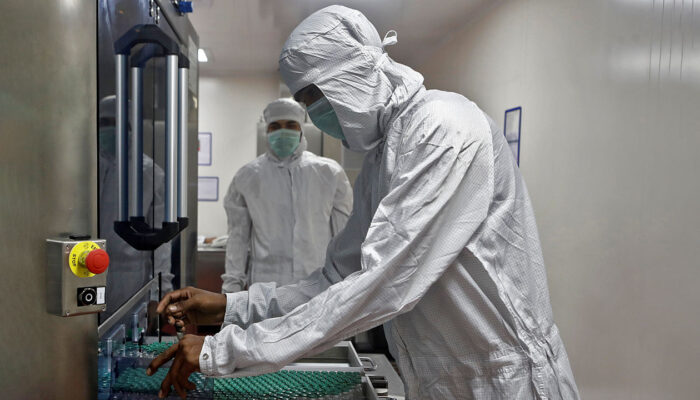 
An employee of the Serum Institute of India removes vials of Covishield, the company’s COVID-19 vaccine, from an inspection machine.

An Indian man is suing one of the world’s largest vaccine manufacturers after falling seriously ill during a trial of a COVID-19 vaccine developed by the University of Oxford and AstraZeneca. The patient developed a neurological condition after being vaccinated last month and is seeking 50 million rupees ($680,000) in damages from the Serum Institute of India (SII), which produces the vaccine in India.

But SII has hit back hard: In a 29 November statement, it called the allegations “malicious and misconceived” and said it may seek damages of up to 1 billion rupees in a countersuit that claims reputational damage. The volunteer was “specifically informed by the medical team that the complications he suffered were independent of the vaccine trial he underwent,” the company said.

The case has dominated the news in India for days, but crucial facts are still murky; neither SII nor the Indian government’s regulatory authority has provided details. Some critics have asked why the trial was not paused when the adverse event occurred, as another trial of the same vaccine has been. Others worry SII’s harsh reaction against the trial volunteer may undermine the already fragile public confidence in clinical trials.

Based on other studies, AstraZeneca has reported its vaccine has an efficacy ranging from 62% to 90%, although the findings have raised questions because it seemed to work better in patients who accidentally received a smaller dose in their first shot. SII has an agreement to produce the vaccine on a massive scale—tens of millions of doses per month—with support from the Bill & Melinda Gates Foundation and Gavi, the Vaccine Alliance. The company is now testing its version, named Covishield, in 1600 participants at 17 sites spread over nine Indian states.

The trial participant, a 40-year-old business consultant from Chennai, sent SII a legal notice on 21 November claiming he developed a severe neurological condition on 11 October, 10 days after receiving his first vaccine dose. He spent 15 days in hospital, including 8 days in intensive care, suffering from acute neuro-encephalopathy that left him “totally disoriented,” according to the complaint, so much so that he could no longer recognize close relatives. He is doing much better now but still has not fully recovered, his wife has told reporters.

Adar Poonawalla, CEO of SII, told reporters during a 28 November press briefing that there were “zero hospitalizations” among trial participants. But the trial’s principal investigator, S. R. Ramakrishnan of the Sri Ramachandra Institute of Higher Education and Research has acknowledged in interviews that the subject fell seriously ill, and that he did receive the study vaccine, not a placebo. Based on a radiological examination of his brain, Ramakrishnan determined his illness was not a result of the vaccination, he reportedly told The Straits Times. A local ethics committee agreed with that assessment, Ramakrishnan said. (Ramakrishnan did not respond to questions from Science and calls to the chair of the ethics committee were not answered.)

In its 29 November statement, SII agreed that “there is absolutely no correlation with the vaccine trial and the medical condition of the volunteer,” but did not provide any details. It also did not explain why the trial was not halted when the adverse event occurred. Such pauses are not uncommon: Vaccination was paused in AstraZeneca’s own trial in more than 23,000 people twice after a suspected serious adverse reaction occurred. In SII’s study, “Initial causality assessment findings did not necessitate stoppage,” says Balram Bhargava, director general of the Indian Council of Medical Research, a co-sponsor of the study.

In a new statement posted yesterday on Facebook, SII said Ramakrishnan, the trial’s data safety and monitoring board, and an ethics committee “independently cleared and reckoned [the adverse event] as a nonrelated issue to the vaccine trial,” and that “all the reports and data related to the incident” were sent to regulatory authorities. India’s Central Drugs Standards Control Organisation has not discussed the issue publicly and did not respond to Science’s queries.

“Done properly, the investigations into a serious adverse event could have been done in just 3 days,” says retired virologist Thekkekara Jacob John, formerly at the Christian Medical College, Vellore. “If they were not sure, the study should have been halted and the public informed.”

Asked whether the trial should have been put on hold, Adrian Hill of the Jenner Institute at the University of Oxford, who helped develop the AstraZeneca vaccine, responded, ‘No comment—I do not know the details of the case.”

Critics say the company’s threat to countersue the patient sets a bad example, even if the man’s illness is deemed unrelated to the study vaccine. “Maybe there’s a worse way to handle this, but I find it hard to imagine one,” Hilda Bastian, an independent expert in evidence-based medicine wrote Monday on her blog about COVID-19 vaccines on PlOS.

India’s health secretary, Rajesh Bhushan, has so far dodged questions about the issue, saying the matter is now in court. Malini Aisola, a co-convenor of All India Drug ActionNetwork, says the government is using that argument “as a shield to avoid answering issues of huge public interest.”

SII, which supplies vaccines against diseases such as polio, measles, hepatitis, and tuberculosis to more than 160 countries, is already producing 40 million to 50 million Covishield doses per month, and says it will soon be able to increase that to 100 million. The company hopes to file for an emergency authorization of the vaccine in India within 2 weeks. After a 28 November visit by Indian Prime Minister Narendra Modi to the company’s headquarters in Pune, Poonawalla said he expects the Indian government to buy 300 million to 400 million doses of Covishield by July 2021. SII hopes to sell the vaccine widely in Africa as well through the COVID-19 Vaccines Global Access Facility, better known as COVAX.