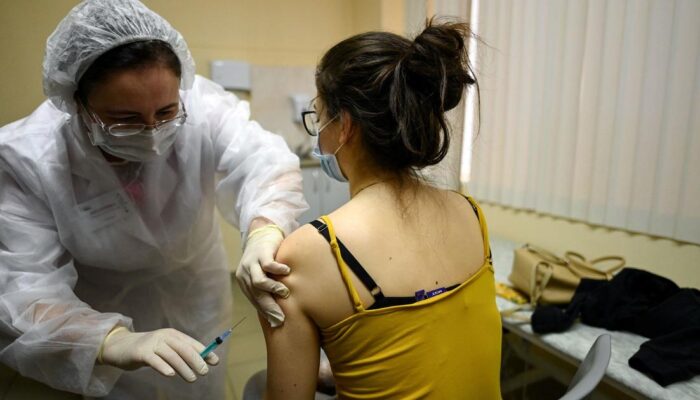 
Moscow — Russia’s capital officially launched a mass-vaccination program against COVID-19 over the weekend, with Moscow taking a different approach than that being planned by most Western nations. Not only is Moscow using a Russian-made vaccine before final human trial data is available, it’s also focusing first on workers deemed to be at the highest risk of exposure to the virus, rather than on older people who are at the highest risk of severe cases.

Russia was one of the first countries to announce the development of a vaccine against the new coronavirus. Named Sputnik V, it was registered by the government’s health authorities as safe and effective in August, before final Phase 3 human trials even began.

Over the weekend, Moscow made inoculation with Sputnik V available to workers at the capital’s medical, social services, and educational institutions — private or public.

“Millions of people are waiting for protection from the new coronavirus infection,” read an official announcement on the city government’s website. “In Moscow, as a matter of priority, vaccination against coronavirus is carried out for residents in the main risk group: These are doctors and teachers.”

Officials said these were the groups who, through their professional activities, were most likely to come into contact with large numbers of people, and thus most likely to be exposed to the virus that has claimed more than 43,000 Russian lives, according to official figures.

An online registration service, launched last week after an announcement by President Vladimir Putin, allows city residents between the ages of 18 and 60 who work at listed organizations to book appointments for free vaccination at one of 70 sites around Moscow.

The vaccine uses two different adenovirus vectors to prompt the human immune system to produce antibodies that protect against the new coronavirus, similar to the one being developed and trialed by Oxford University in partnership with AstraZeneca. Like the other major vaccines undergoing trials, Sputnik V is administered in two doses, with a 21-day gap between the two shots.

Vaccination is currently not available to those with chronic diseases, or pregnant or breastfeeding women. Unlike the U.K., where authorities last week became the first to approve the vaccine made by U.S. pharmaceutical giant Pfizer and German’s BioNTech for widespread use, Russia is not currently offering Sputnik V to people over 60, due to a lack of trial data.

Sputnik V is still undergoing the final leg of the Phase 3 trial, involving some 40,000 volunteers. At least 20,000 Phase 3 trial volunteers have already received two shots, but that number includes recipients of placebo injections used as a control group, according to officials.

Some countries roll out experimental COVID-19…

Russia had already been giving its vaccine to medics working with the coronavirus patients, and some select others, for weeks. Health Minister Mikhail Murashko said Wednesday, during a presentation to the United Nations about Sputnik V, that more than 100,000 “residents from risk groups” had already been vaccinated across the country. He didn’t elaborate on who, besides medical workers, were included in those inoculations.

Last month, Sputnik V’s developers said preliminary data showed the vaccine was 95% effective, echoing reports by Pfizer and U.S. drugmaker Moderna on their vaccines. The Oxford team has said that, with one specific dosing regimen, it’s vaccine also appears to be at least 90% effective at preventing COVID infection.

The side effects reported by Sputnik V trial participants thus far include mild fevers, headaches and muscle pain, in about 15% of recipients. Again, those results are very similar to data reported by the major Western drugmakers.

Unlike those other vaccine development efforts, however, Russia has shared little trial data for scrutiny by outside experts, and it moved much faster, without full data, to approve the Sputnik vaccine, leaving some experts, both in Russia and abroad, with lingering doubts over its safety and efficacy.

Alexander Gintsburg, head of the Gamaleya Center that developed Sputnik V, previously said the vaccine was not been tested on older people during the first two trial stages. Gintsburg himself, at the age of 69, claimed he had received two doses before the drug was formally registered in the summer, and that he felt fine.

The Health Ministry said in October that it had sanctioned a separate study to test the vaccine on 110 volunteers over the age of 60. Gintsburg indicated the results of that study wouldn’t be available until 2021.

Moscow’s mass vaccination rollout began Saturday as Russia continued to set new daily records for coronavirus infections. With a population of about 13 million, the capital city has remained the epicenter of Russia’s COVID-19 epidemic.

“Over the first five hours, 5,000 people signed up for the inoculation — teachers, doctors, social workers, those who are today risking their health and lives the most,” Moscow Mayor Sergei Sobyanin wrote Friday on his personal website.

A nurse prepares to administer a dose of Russia’s Sputnik V vaccination against the coronavirus disease (COVID-19) at a clinic in Moscow, December 5, 2020.

In a recent survey by the independent pollsters at Russia’s Levada-Center, however, only 36% of respondents said they were prepared to be vaccinated against the new coronavirus.

Russian officials have said they expect to have 2 million doses of Sputnik V available by the end of this year.

According to the government, the vaccine will eventually be made available at no cost to the wider public.

While Russia may have been the first to formally register a COVID-19 vaccine as safe and effective for public use, its actual rollout has been delayed due to the technical difficulties of mass-producing the new drug.

Last month, Russia’s defense ministry announced the roll-out of a mass-vaccination campaign for members of the military. Over 400,000 servicemen and women are expected to be inoculated, including 80,000 before the end of this year.