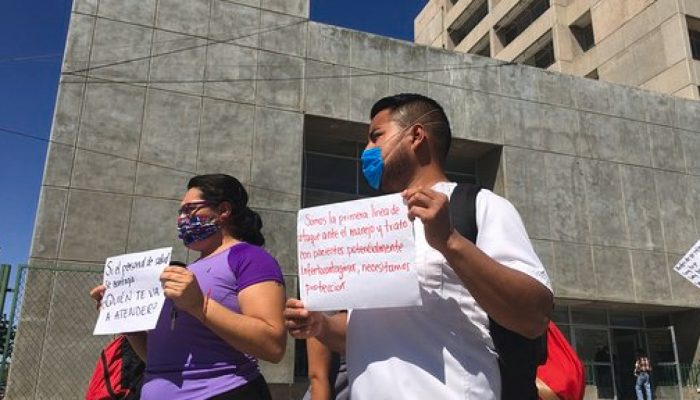 
JUAREZ, Mexico (Border Report) — The mayor of Juarez says the city’s alarming COVID-19 mortality rate is “not realistic,” and that more people should be tested to determine the true scope of the epidemic.

Juarez on Tuesday reported 47 cases and 16 deaths, for 34% mortality rate. On Wednesday, the city was up to 63 cases and no new fatalities, which brought the death rate down to 26%.

“I’m not saying they’re trying to hide things, but those rates don’t coincide (with the situation). The mortality rate should be 5 to 6 percent of the amount of positive cases, but we are well over 20%,” Mayor Armando Cabada told Border Report. “I think many more tests should be applied to have an accurate number.”

He estimates the number of coronavirus infections in Juarez should be closer to 350 than those cases confirmed so far.

El Paso, Texas, just across the Rio Grande, was reporting 346 cases and four fatalities, for a death rate of 1.1%. Sixty-one people remained in El Paso hospitals as of Wednesday, 26 in intensive care and eight of those on ventilators. In Juarez and the rest of Chihuahua, 46 COVID-19 patients are hospitalized, 25 of them in serious condition and seven on ventilators.

It’s not the first time that the official COVID-19 count in Juarez has been challenged.

Medical workers and a lawyer for doctors at one of the government hospitals this week alleged that the count could be much higher and that the government isn’t doing enough to protect either health workers or patients brought in for other reasons. Critics also say that 80 atypical pneumonia deaths that have taken place this year are being left out of the count.

On Wednesday, more than a dozen nurses at the IMSS-35 government hospital where 14 of the 16 Juarez victims have died staged a protest over alleged lack of personal protective equipment.

“I’m afraid to infect my children. I feel impotent at not having (the tools) to work with. I feel impotent coming home to an empty house. My children are no longer in the city. I had to send them away because I was afraid of giving them something,” said one of the nurses who took part in the protest.

Others demonstrators, some still wearing their nursing uniforms, held signs warning residents “If health workers become infected, who is going to take care of you?”

Relatives of patients at the same hospital earlier had tried to forcibly take their family members home. The government responded by sending the Mexican National Guard to the hospital, as evidence by exclusive KTSM-Border Report video.

But Chihuahua health officials who are in charge of the testing say their numbers are accurate.

“Protecting medical workers is our priority,” said Dr. Arturo Valenzuela, the ranking Chihuahua state health official in Juarez. He explained that medical workers who have direct contact with COVID-19 patients are getting “all the protection they need,” whereas other workers receive equipment adequate for their duties.

As for the atypical pneumonia deaths, Valenzuela said many of those occurred in the first two months of the year before COVID-19 was detected in the community. “It may have been influenza or some other reason, whereas now if we see atypical pneumonia it’s probably COVID-19,” he said.

But some of the demonstrators pointed out that many coronavirus patients are asymptomatic and others may not show signs for up to 14 days.

Cabada said there is only so much he can do to protect the city from the epidemic, given that it falls in the realm of the state and federal governments. He said he’s trying things like spraying a water-and-chlorine mixture on neighborhoods where coronavirus cases are being reported and trying to get people to comply with stay-at-home orders.

Customers eat up at a roadside food stand in South Juarez. Juarez, Mexico, like El Paso, Texas, have asked nonessential businesses to close and restaurants to only sell takeout or delivery. (photo by Julian Resendiz/Border Report)

Also, street vendors were present at some corners, some even selling home-made surgical masks for $3.

Cabada said he was grateful to those who are observing the order and urged those who are out of compliance to “do the right thing” for their safety and that of others.

Visit the BorderReport.com homepage for the latest exclusive stories and breaking news about issues along the United States-Mexico border.