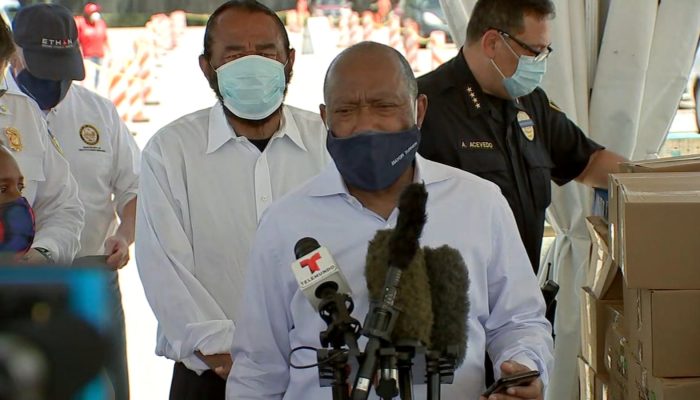 The mayor reported 115 new COVID-19 cases and five new deaths, which brought the death toll to 65, with nearly all of them involving an underlying health condition.

“In this entire time period, we’ve never reported in the city of Houston more than five deaths, so this equals the maximum that we have ever reported of people that passed away on any given day,” Turner said.

Statewide, Texas has hit a third straight day of more than 1,000 new coronavirus cases Saturday as the state charged into its first weekend of reopening the economy.

Residents are allowed to go back to malls, restaurants, movie theaters and retail stores in limited numbers.

“One of my concerns is, people are starting to behave as if the virus is gone. The virus is not gone,” Turner said. “The virus is not under control. Let’s be very cautious, very careful as we proceed and move forward.”

The 1,293 new cases is the second-highest single day mark and is the first time the state has recorded more than 1,000 three days in a row.

Gov. Greg Abbott’s office has said the number of daily confirmed cases is expected to increase as the state ramps up testing to nearly 30,000 tests per day.

“Please bear in mind there are risks that still exist within our community. We have to make sure that we are social distancing, wearing face coverings and staying home,” Turner added. All of those things that we have been doing, we need to continue to do.”

In the middle of his update, the mayor briefly spoke about the adult entertainment club that attempted to open Friday night, but was shut down.

“We have been attempting to enforce the governor’s order that he put out. There was a strip club that wanted to characterize itself as a restaurant. We closed them down on Friday,” Turner said.

He also asked for the governor to clarify his order for businesses like strip clubs that intends to open too soon.

“It is important for the governor to clarify his order for the businesses that are starting up and inform them that he did not intend to include strip clubs in those businesses. Then the state attorney general need to aggressively enforce his order. Otherwise, it opens the door for more and more people to attend these businesses,” Turner said.