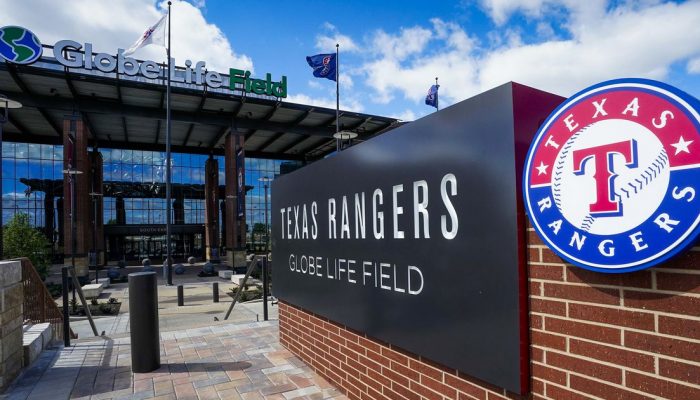 There could be baseball in Arlington this year, after all.

As Major League Baseball searches for ways to start its pandemic-stopped season, the State of Texas’ decision to start re-opening its economy has brought Globe Life Field, among other stadiums in the state, into the conversation as potential hosts sites for a truncated season.

According to three sources Monday, Texas has been discussed in MLB’s latest exercise to find host sites for clusters of teams to reduce travel and risk. CBS Sports first reported the story Monday. MLB has previously discussed teams using sites in Arizona or Arizona and Florida, the two spring training capitols, in various scenarios.

Gov. Greg Abbott announced last week the plan to slowly re-open the Texas economy and pro sports are already gravitating towards the area. The PGA Tour last week announced its plans to restart its season, without fans, at the Charles Schwab Invitational at Colonial Country Club in Fort Worth. On Monday, Abbott said he was working with Texas Motor Speedway to potentially host a joint spectator-free weekend of NASCAR and Indy Racing “very soon.” Baseball has not set a start date for its season.

Texas could offer baseball an attractive option, too. While teams would need to drive as much as two or three hours in Florida to visit certain sites, Texas can offer two Major League stadiums: Globe Life Field in Arlington and Minute Maid Park in Houston. There are also numerous minor league facilities such as Dr Pepper Ballpark in Frisco and The Dell Diamond in Round Rock. There are also numerous top-tier college facilities, if those are made available.

It is important to understand that just about any “plan” that gets floated out at this point remains nothing more than glorified brainstorming. Though state governments are starting to make plans to re-open after a month of COVID-19 quarantines, no professional team sports league has yet to announce plans for a restart.

“The only decision we have made, the only real plan that we have, is that baseball is not going to return until the public health situation is improved to the point that we’re comfortable that we can play games in a manner that is safe for our players, our employees, our fans and in a way that will not impact the public health situation adversely,” MLB Commissioner Rob Manfred told FOX Business last week.

“Right now, it’s largely a waiting game,” he added. “During that period, as you might expect any business would, we have engaged in contingency planning. We thought about how we might be able to return in various scenarios but again the key is the improvement in the public health situation.”

Dr. Anthony Fauci, the director of the National Institute of Allergy and Infectious Diseases and the voice of the coronavirus task force, offered two possibilities for potential resumption in an interview with YES Network Monday.

“It’s reasonable you could put a group of players in a few cities and make sure you test them so they don’t infect others, and you have baseball in a spectator-less environment,” Fauci said. “Another version is to limit the number of people in the stadium and make sure you seat them in a way where they are really separate and maybe even wearing the facial coverings. People say ‘are you crazy?’ But to me, it’s better than no baseball at all.”

As with every scenario that has been workshopped, there are a significant number of issues, though two remain at the top of the list: The public health crisis and the significant dollars at stake for owners and players alike. Baseball was a $10.7 billion industry last year. While going without crowds would create a significant reduction in revenues, ticket sales, concessions and parking constitute less than 50 percent of a team’s revenue for a year.

Among things to be decided if Texas becomes more realistic: How would MLB temporarily realign from two 15-team leagues to three 10-team leagues? Under the Arizona/Florida idea, rather than having teams divided into the National and American Leagues, they would compete in the Cactus and Grapefruit Leagues.

Also, which teams would be asked to give up the relative comforts of their own spring training facilities to temporarily plan in Texas? If MLB moves towards a league that is geared simply to be TV-friendly without fans, it might make sense to have leagues set up based on time zones, with East Coast teams in Florida, teams in the Central in Texas and the rest of the teams in Arizona.

There are eight teams with Central Time Zone home bases: Both Chicago teams, St. Louis, Kansas City, Minnesota, Milwaukee, Houston and the Rangers. Colorado is a Mountain Time Zone-based club, an hour behind the Central. A team from the Eastern Time Zone, perhaps Detroit, might need to be added.

Another question: Would the Rangers be able to use all of the numerous state-of-the-art amenities afforded them in Globe Life Field? Or would teams playing in their home stadiums have to give up some access to major league amenities if the majority of teams are playing in minor league stadiums?

Teams would also need some secondary bases for depth options since the minor league season is becoming more and more unlikely. That’s where minor league and college facilities could become more of a point of conversation.

It is all very much a work in progress. But, on Monday, Texas became part of the conversation.