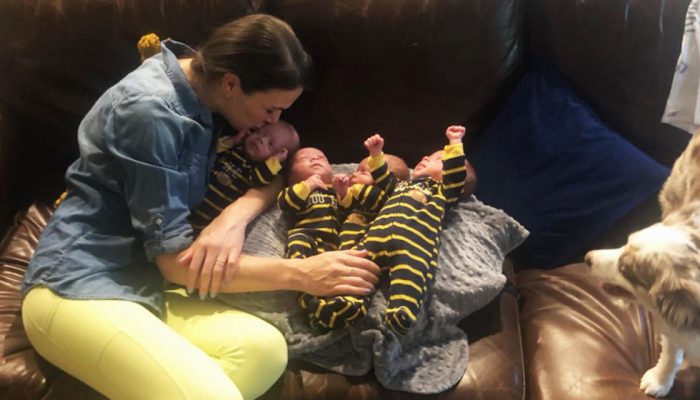 When Jenny Marr went to her first ultrasound exam to get a peak at her first child with husband Chris Marr, she noticed a strange look had crossed her doctor’s face. Naturally, she worried that something was wrong with the baby. She asked Dr. Lauren Murray if there was a problem.

Feeding quadruplets every three hours it tough. It takes about an hour for them all to eat, then there’s only a short window of time before they start it again. Still, the Marrs feel like they’re getting the hang of it. (Courtesy Marr family)

Both Marr and Chris, 35, are only children and as far as they know no one in their families has ever had multiples. A week later on November 19, 2019 they visited a maternal-fetal medicine specialist for a follow-up appointment and the technician performing that ultrasound shot the couple an odd glance.

“The tech — who was doing the initial (scan) — she gave me a funny look. We were like, ‘Oh what’s going on now?’ We got worried again,’” Chris told TODAY. “She was really cute. She said, ‘I’m not supposed to say this, but y’all got four babies.’”

In one short week they went from having triplets to quadruplets.

“I made the joke that I am not coming back because there are going to be five babies next time,” Chris said. “We were just shocked. Jumping from three to four was easier to swallow. Just after that we heard they were healthy.”

Dr. Lauren Murray, the Marrs’ OB-GYN, says as far as she and her colleagues can tell there have been only 72 reported cases of identical spontaneous quadruplets. (Courtesy Marr family)

The first-time parents were in “utter shock” that they were expecting identical, spontaneous quadruplets. It’s so rare that it’s hard for doctors to know how often it has occurred. Murray and her colleagues estimate that identical, spontaneous quadruplet births occur in 1 in 11 million or 1 in 15 million births. They found a mere 72 cases of it in published literature.

“It’s unbelievable. It’ll never happen again in my career. I said, ‘Girl, go buy a few lottery tickets because those are the kind of odds we’re dealing with,’” Murray, an OB-GYN at Texas Health Presbyterian Hospital Dallas, told TODAY. “What a miracle it was.”

The Marrs’ shock continued when they learned that all four babies shared one placenta, which made the pregnancy more complicated. They all relied on that placenta for their nourishment, which meant if they didn’t share well, one (or more) could be in trouble.

“The risk was that one of the babies can develop stronger and basically take away from the other babies,” Chris explained.

The doctor said that might require surgery and the couple worried again. But their doctors reassured them that they would address issues if they arose.

“The babies shared incredibly well. There were no incidents on the sonogram even leading up to that where we were worried that one of them, or two or three of them, would be significantly smaller,” Murray said.

Having identical spontaneous quadruplets was shocking enough, but when Jenny Marr went into labor during the COVID-19 pandemic it was the first time she truly worried. (Courtesy Marr family)

When Marr was 28.5 weeks pregnant, labor started. On top of delivering early, hospitals across the country were changing their policies because of COVID-19 and the Marrs wondered how that would impact their delivery and treatment.

“For the first time (during my pregnancy) I anticipated the worst,” Marr said. “Maybe we were going to have sick babies and they were going to be in the NICU.”

But her cesarean section delivery went well and Marr, her husband and mother watched as the doctors at Texas Health Presbyterian Hospital Dallas pulled baby after baby out on March 15. Harrison was first, he weighed 2 pounds 6 ounces. Hardy was next he was 2 pounds 10 ounces, then Henry who was 2 pounds 6.7 ounces and Hudson was last at 1 pound 15 ounces.

“They were all born in three minutes. It’s incredible,” Marr said. “We called them our baby birds because they really looked like baby birds.”

Three of the babies needed oxygen and all four stayed in the neonatal intensive care unit for about 10 weeks. The babies came home in early May. So far, the Marrs have been juggling the feedings, which happen every three hours and take at least an hour to feed all of them. Telling the boys apart is tough.

“They each have little bitty characteristics,” Chris said. “When we sit down and look at them we can figure out who they are but if you just look at them from a distance, they all look the same. Thank God, Hudson’s a little smaller than everybody else and quieter.”

Telling the four boys apart is still challenging for Jenny and Chris Marr. While the boys are two months old, they have only recently been home with their family after they were born at 28.5 weeks. (Courtesy Marr family)

While the couple is working on helping the babies gain weight, they’re enjoying that social distancing and quarantine has allowed their family to grow closer.

“It was a very surreal time and it’s one of those things that we will probably look back on in a couple of years, hopefully, when everything’s back to normal like, ‘Wow that was crazy,” Chris said.

That’s why they want their experience to make others smile.

“We just hope that this little story and our boys bring as much joy to everybody as they bring to us,” Marr said.