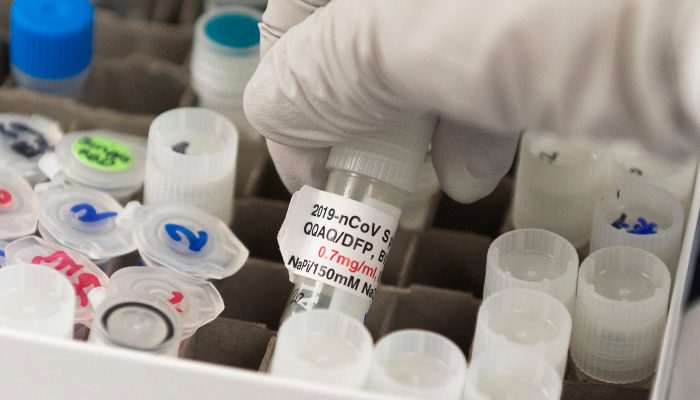 As the coronavirus pandemic spreads at unprecedented rates, invading the lungs of people of all ages, ethnicities and medical histories, companies are ratcheting up their efforts to fight the disease with accelerated schedules for creating new vaccines, and beginning clinical trials for potential treatments.

On Wednesday, Novavax, a Maryland-based biotech company, said it would begin human trials in Australia in mid-May for its vaccine candidate. Novavax is one of more than two dozen companies that have announced promising vaccine programs that are speeding through the early stages of testing unlike ever before.

Also on Wednesday, the stem-cell company Mesoblast said it was starting a 240-patient clinical trial, supported by the National Institutes of Health, that would test whether cells derived from bone marrow could help patients who developed a deadly immune reaction to the coronavirus.

In normal circumstances, development of new vaccines and treatments would take years. But the pharmaceutical industry is racing to compress this timeline with the support of nonprofit organizations, government agencies and regulatory authorities.

Novavax said its vaccine candidate had stimulated a powerful immune response in lab and animal experiments, producing antibodies that could fight off the coronavirus.

While a final product that would be widely available is still a year or more away, the Novavax effort is one of many that is ready to be tested in people.

A vaccine made by the biotech company Moderna is already in a clinical trial, which started March 15. Another one, developed by Inovio Pharmaceuticals, was injected into the first adult volunteers on Monday. The health care giant Johnson & Johnson expects to start clinical trials in September, and has received a nearly $500 million partnership via a division of the U.S. Department of Health and Human Services. And experimental vaccines developed by researchers at the University of Pittsburgh and Baylor College of Medicine in Houston are also waiting for permission from the Food and Drug Administration to begin testing in people.

“We’re all trying to do something which we have almost no precedents for, which is accelerating a vaccine in the middle of a pandemic,” said Dr. Peter Hotez, who is a co-director of the Texas Children’s Hospital Center for Vaccine Development at Baylor College of Medicine.

There is no approved treatment for Covid-19, the illness caused by the coronavirus, and researchers and doctors are testing a host of therapies in a desperate bid to save the lives of people who have few other options. President Trump has aggressively promoted two old malaria drugs, which have shown only limited evidence of working as treatments for the coronavirus. He has pushed for the drugs’ broader use in patients without the more rigorous clinical trials typically used to evaluate treatments.

But Mesoblast is taking a more standard approach, testing the cell therapy in 240 patients at more than 20 medical centers around the country, which are part of the Cardiothoracic Surgical Trials Network, a program created by the N.I.H. Patients will be randomly divided into groups that will receive the therapy, and those that will get a placebo. Researchers said the trial could yield initial results within months.

While many people who are infected with the coronavirus experience mild symptoms, others develop a severe case when their immune systems go into overdrive and begin attacking the body’s organs, which is called a “cytokine storm.” This can set off something called acute respiratory distress syndrome, which damages the lungs and is often deadly. Several other treatments are also being tried to calm this storm and reset the immune system.

Dr. Silviu Itescu, chief executive of Mesoblast, said the company decided to test its treatment in these Covid-19 patients because its product had shown good results in children who developed a similar deadly immune reaction called acute graft versus host disease, in which the body’s immune cells can attack healthy cells after receiving a bone-marrow transplant. Their treatment is currently being reviewed by the Food and Drug Administration for use in that disease.

“We put two and two together and said, ‘We think we’ve got something that is safe and could have benefit,’” Dr. Itescu said.

Another stem cell company, Athersys, has said it is also planning a study of stem cells in coronavirus patients with advanced respiratory distress syndrome, but is not as far along.

Nine coronavirus patients at Mount Sinai Hospital in New York have received the Mesoblast treatment on an emergency basis, and doctors there said the initial response was promising. Six patients were removed from ventilation and others were being weaned off or had remained stable — a welcome development when most patients who need ventilator support do not survive.

But Dr. Itescu said that even though the treatment was promising, it was still not clear whether it would work, or whether the early promise was merely anecdotal. Although many drugs are being tried outside of a formal study, he said, “We do think this is the right way, and a randomized, controlled trial is the only way you are going to know whether an approach works.”

Pfizer said on Thursday that it would begin testing an experimental drug, as well as its rheumatoid arthritis treatment Xeljanz, in clinical trials against Covid-19. Xeljanz, also known as tofacitinib, is an anti-inflammatory medicine and could dampen the immune system in patients with the severe respiratory syndrome. But the company warned that research was still in its early stages and that Xeljanz should not currently be used in patients with serious infections.

Still, a vaccine would be the best way to stop further spread of the coronavirus because it enhances the immune system’s natural defenses. Of course, many companies are also struggling with ways to partner with manufacturing ventures to produce enough vaccine so that it will be widely available.

More than one million people around the world have already been sickened by the coronavirus. For public health experts and those on the front lines, a vaccine can’t come soon enough.

“If you could only have a vaccine, just imagine you could walk out your door confident that you were not going to get sick,” said Dr. Gregory Glenn, the president for research and development at Novavax. “Because of that, everyone is very motivated and working to move things quickly.”

Novavax has worked on experimental vaccines for both SARS and MERS, which are closely related to the new coronavirus. The company also has vaccines for the seasonal flu and respiratory syncytial virus, which causes colds, in the last stages of clinical trials.

When Chinese scientists posted the genetic sequence of the new coronavirus in January, researchers at Novavax started working on recombinant technology to make a synthetic version of the virus. Researchers used a baculovirus to carry bits of genetic material from the coronavirus into cells. Baculoviruses typically infect insects, so they cannot replicate and cause illness in humans.

“We never use the real virus,” Dr. Glenn said. “But we can fool the immune system to think it’s been attacked.”

By combining the recombinant vaccine with an adjuvant, or substance that increases immune stimulation, Novavax was able to achieve a high neutralization titer in preclinical tests — a measure of the protective antibodies that can block the virus.

The company hopes to see a similar effect after giving more than 130 healthy adults two doses of the vaccine. Results of the trial, which will be conducted in Australia, are expected around July.

Moderna and Inovio are pioneering a different approach.

Moderna uses RNA technology, while Inovio has developed DNA technology to package the genetic code of coronavirus spike proteins, which make up the crown around the virus and help it latch on to cells. This approach has the advantage of being able to move to trials faster than vaccines that require the production of viral proteins or a weakened version of the actual virus to induce an immune response. But the technology is still unproven. There are no approved RNA or DNA vaccines for any disease.

Dr. Hotez’s team and Johnson & Johnson, on the other hand, are relying on technology that is more similar to Novavax’s approach because it has been used successfully to create other vaccines in the past, including one for Ebola that has been registered in Europe and is used in the recent epidemic in the Democratic Republic of Congo.

Some countries already have the manufacturing capabilities that will be needed to scale up vaccine production, and that will keep costs low if everything goes well.

“It’s not very sexy, but it’s a reliable approach,” Dr. Hotez said. “We know that it works.”

For now, the first stage of clinical trials for each potential coronavirus vaccine must focus on how safe or toxic the vaccine may be at different dose levels. Researchers will collect the medical histories of volunteers participating in the trials and track their antibody levels, liver enzymes and other indicators of emerging side effects.

One concern is that the vaccines may inadvertently cause a phenomenon known as disease enhancement, in which vaccinated people develop more severe inflammation and disease than those who have never been vaccinated. Studies of early SARS and MERS vaccines noted this troublesome complication in some animal models.

“If everything looks good and the vaccine appears to be safe, then we’ll go on to trials with much bigger numbers and look at the vaccine efficacy,” said Dr. John Ervin, who is leading the Inovio clinical trial in Kansas City, Mo.

In parallel, companies are planning to continue further animal testing, as well as investing in manufacturing capacity both in the United States and abroad. They will need millions of doses for additional clinical trials and even more if a vaccine eventually goes to market.

Companies also have to be prepared for the possibility that some candidates will fizzle out or that demand for a vaccine will decrease by the time one is ready for widespread use. But industry experts are not waiting for this to happen.

“The virus is racing through crowded urban areas and slums in certain countries,” Dr. Hotez said. “How do you do social distancing in those places? You don’t.”

“We are building out a road map for how we work as a country for the next two or three years,” he continued. “That’s roughly the time frame that we saw for the 1918 flu pandemic and that’s probably likely for Covid-19.”