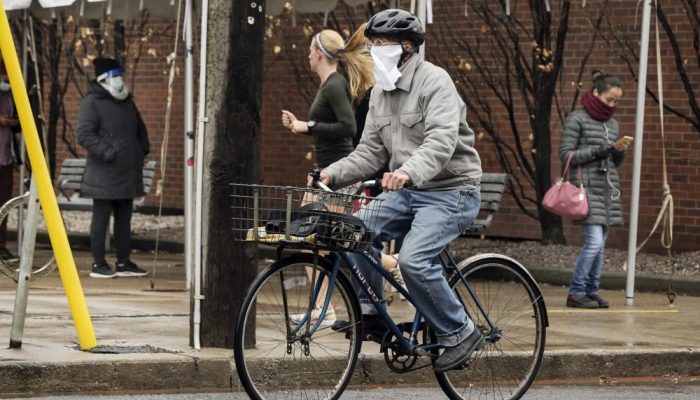 
Today’s Morning Brief is brought to you by the Vancouver Fraser Port Authority. Now more than ever, it’s vital Canadians have what they need. As a Canada Port Authority responsible for enabling trade through the Port of Vancouver, we’re working together with industry to keep goods and the economy moving for Canada. Learn more here.

Residents of Ontario and Quebec are expected to learn this week what the path to a new normal might look like.

As the Canadian Press reports, Ontario Premier Doug Ford is planning early in the week to unveil a framework for reopening the province’s economy, which has been shuttered since mid-March because of COVID-19. Quebec Premier Francois Legault is also expected to reveal his own timeline for reopening his province.

The two provinces with the most COVID-19 cases will be the latest to lay out some details for easing their own lockdowns after Saskatchewan, Prince Edward Island and New Brunswick announced tentative timelines for a return to some semblance of normal last week.

However, Sunday saw public-health officials across the country report more than 1,200 new cases of COVID-19 and at least 95 additional deaths. Ontario, meanwhile, announced schools would remain closed through the end of May.

Back in Ottawa, the Conservatives are raising criticisms of the Liberal government’s pandemic relief programs, with party finance critic Pierre Poilievre saying the massive multi-billion dollar plan amounts to “freakonomics.”

“These massive programs will be like a gigantic experiment in freakonomics because in many cases they are having the opposite of their intended effect,” he said on Sunday, as Global News reports.

Poilievre said programs such as commercial rent relief and the Canada Emergency Response Benefit discourage people from working — or businesses keeping their doors open — in order to meet eligibility requirements that are too strict.

The head of the organization representing Ontario’s doctors says the government last week rejected multiple offers by the province’s physicians that would have increased doctor-led medical support in long-term care homes, where the impact of COVID-19 has been catastrophic compared to the general public.

One of the proposals from the Ontario Medical Association was to set up mobile doctor-run COVID-19 assessment centres at long-term care homes (also known as nursing homes), according to the group’s president Dr. Sohail Gandhi.

As well, iPolitics’ Kady O’Malley has what we’re watching this week. It includes the first-ever in-person meeting on Wednesday of the newly created Special Committee on the COVID-19 Pandemic.

Flattery and foot dragging: China’s influence over the WHO under scrutiny (Globe and Mail)

The coming flu season could make the pandemic worse. Is Canada ready for it? (CBC News)

Experts say a decision from 23 countries to not unreasonably restrict trade of agricultural and agri-food products is vital for securing Canada’s food supply.

A statement from the World Trade Organization announced that 23 countries, including Canada, Mexico, the United States, China and the European Union, had agreed that measures to curb the spread of COVID-19 would not “adversely” affect trade in agriculture and agri-food products.

Simon Somogyi, chair in the Business of Food at the Arrell Food Institute at the University of Guelph, said the countries that signed onto the agreement, particularly the U.S. and Mexico, are home to the vast majority of agri-food companies that conduct trade with Canada.

“This statement is welcome and helps us safeguard the food security of Canada,” he said.  Rachel Emmanuel has more.

After two months of frantic response to the novel coronavirus, the White House is planning to shift President Donald Trump’s public focus to the burgeoning efforts aimed at easing the economic devastation caused by the pandemic. Trump’s aides are aiming to move him onto more familiar — and safer, they hope — ground: talking up the economy, in tighter controlled settings. (Associated Press)

Trump’s erratic handling of the outbreak, the worsening economy and a cascade of ominous public and private polling have Republicans increasingly nervous that they are at risk of losing the presidency and the Senate if Trump does not put the nation on a radically improved course. (New York Times)

U.K. Prime Minister Boris Johnson returned to his Downing Street residence on Sunday after recovering from COVID-19, ready to take the helm again with pressure growing for the government to explain how it will ease a month-old coronavirus lockdown. (Reuters)

Spanish children went outside at last on Sunday, emerging from their homes for the first time after six weeks of living under one of Europe’s strictest coronavirus lockdowns. The relaxation came as Spain, one of the countries worst hit by the global COVID-19 epidemic, registered its lowest daily increase in the coronavirus death toll in more than a month. (Reuters)

A train likely belonging to North Korean leader Kim Jong-un has been parked at his compound on the country’s east coast since last week, satellite imagery showed, amid speculation about his health that has been caused, in part, by a long period out of the public eye. (AP)

Prime Minister Narendra Modi urged Indians to comply with a nationwide lockdown and social distancing measures on Sunday, a day after some of the world’s toughest restrictions were eased slightly while cases of COVID-19 continued to mount. (Reuters)

Cartoon of the Day

Drake was also a last-minute addition. His monologue thanking frontline workers and urging Canadian stuck at home to work on self-improvement was bumped to the very end of the night.

Here’s some of the artists performing “Gotta Be Patient.”

Have a great Monday!