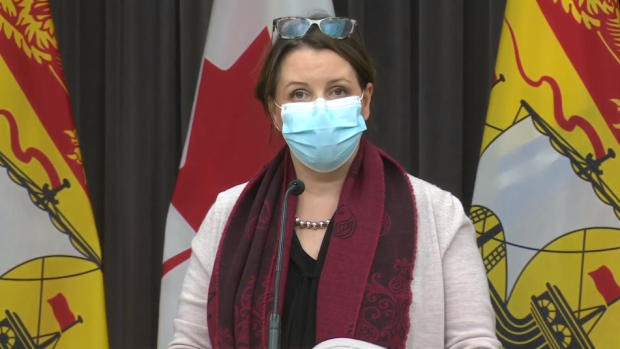 Eleven previously reported cases are now considered recovered, dropping the number of active cases in the province to 116.

To date, the number of confirmed cases in New Brunswick is 508 and 385 have recovered. There have been seven deaths, and the number of active cases is 116 with no one in hospital – 126,678 tests have been conducted.

The four cases in Zone 2 (Saint John region) are as follows:

One individual under 19-years-old.

One individual under 19-years-old.

All individuals are self-isolating and the cases are under investigation.

During a news update on Tuesday, Dr. Jennifer Russell confirmed that at least 60 cases of COVID-19 can be traced back to a ‘superspreader event’ in the Saint John area.

“The event is responsible for more than 80% of the current active cases in this particular zone. And, we have determined that 34 people that have attended this super spreader event have since contracted COVID-19 – and a further 26 cases were contracted indirectly when attendees infected others that they came into contact with,” said Russell.

Russell did not give additional information about the Saint John ‘superspreader event’, other than confirming it occurred ‘occurred at two venues in the course of one evening’.

Russell also provided a definition of a ‘superspreader event’ as: “When a large number of cases are traced to a single gathering or event, with COVID-19 being transmitted from one individual, or a relatively small number of individuals who were in attendance while infectious.”

Russell said there have been improvements in the Saint John testing backlog.

“We have seen a lot of improvements in that backlog, and my understanding is that over the course of the last several days, they’ve done a total of 13,079 swabs,” said Russell. “That includes Saturday Sunday and Monday.”

Russell said anyone who has been waiting over 48 hours for a COVID-19 test is asked to re-submit their request.

“I do want to remind New Brunswickers that nobody should be required to be alone during the Orange Phase,” said Russell. “It was never our intention to have people who live alone not have the ability to have contact with caregivers.”

She added that New Brunswick’s Orange Phase orders allow a “neighbor, caregiver, or a family to support someone who is alone, whether there are mental or physical needs.”

The number of cases are broken down by New Brunswick’s seven health zones:

The province recently announced that residents can take an online self-assessment if they are experiencing mild to moderate COVID-19 symptoms.

On Monday, 1,874 personal and 1,081 commercial vehicles attempted to cross the border into the province.

Of the vehicles attempting to cross the border, 21 were refused entry, for a refusal rate of 0.7 per cent.

About the Author: Atlantic