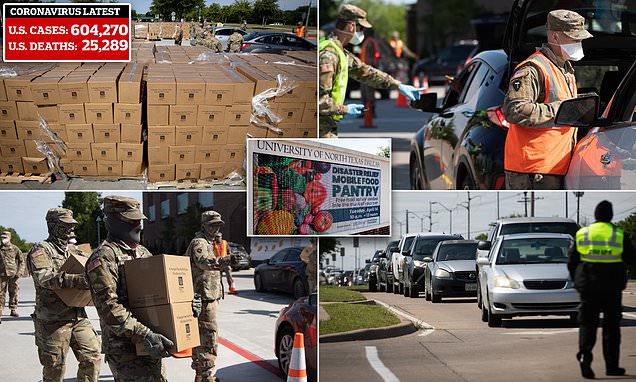 The National Guard helped deliver food to needy residents suffering under the coronavirus quarantine in both Brooklyn and Dallas on Tuesday.

In New York City, the New York Army National Guard were at a Crown Heights pantry filling taxis, Ubers, Lyfts and other for-hire vehicles with take-away meals to be delivered to the elderly and others who can’t leave their homes.

Meanwhile, the Texas National Guard have been handing out boxes of free food to those in need in Dallas, Texas.

The Guard worked alongside the North Texas Food Bank and prepared 4,000 boxes of food with help from the Texas Emergency Food Assistance Program. Cars had to line up in order to receive the handout.

The Texas National Guard prepared 4,000 boxes of food to hand out to those in need and struggling financially

Each driver had to fill out a form asking for a name, address, monthly income and household size.

The Campaign Against Hunger food pantry in Brooklyn expected to feed more than 6,400 homes this week.

‘What we’ve been seeing since COVID-19 is astronomical,’ said Melony Samuels, director of Campaign Against Hunger, a food pantry in Crown Heights to the Daily News.

The National Guard joined other New York City agencies in loading up taxi’s, Uber’s, Lyft’s and other ‘for hire’ vehicles which have joined the effort in delivering meals across the city

New York has been the hardest hit city in the nation from the COVID-19 outbreak with more than 10,000 deaths

The Campaign Against Hunger food pantry in Brooklyn expected to feed more than 6,400 homes this week.

Last week the city’s Mayor, Bill de Blasio, and the City Council announced $25 million in emergency funding for pantries after about a third of them were forced to shut down

TLC-licensed drivers are being paid  to deliver meals while being compensated $15 an hour, plus millage and tolls

‘The increase is because of loss of jobs, unemployment. We understand what it is. We know that even after things look like they’ve settled, there will still be a long line because families will not be adjusting yet.’

Last week the city’s mayor, Bill de Blasio, and the City Council announced $25 million in emergency funding for pantries after about a third of them were forced to shut down.

‘Whatever you need to feed people, you will get it,’ de Blasio said while visiting the site on Tuesday.

‘People right now are afraid. This is like nothing we’ve experienced. Even if it’s one more person we have to reach, we’re going to reach that person, no matter what it takes.’

‘The food will help us, for real,’ Stephanie Rodriguez, of Bushwick said to the News. ‘The supermarkets right now — the prices are up for everything. This can help us throughout the whole time.’

Thirty personnel from the Texas National Guard were on hand to distribute 3,750 27lb boxes of dry pantry staple foods

The food was handed out at the University of North Texas at Dallas campus in south Dallas, Texas

Each package contains a variety of canned vegetables, grains, fruit, peanut butter and other food staples.

In Dallas, the servicemen took precautions as they distributed the food and loaded the boxes into the trunk of each vehicle.

Members of the National Guard were also deployed earlier this month to help with the food bank’s efforts.

The nonprofit group’s mobile pantry distributions surged from 1,000 to almost 2,000 households amid the coronavirus pandemic.

The food parcels had taken days to prepare, pack and finally seal before being brought to the university grounds in Dallas

Each vehicle appeared to receive a couple of boxes of food, some containing fresh produce and the other canned goods

Thirty personnel from the Texas National Guard were on hand to help with the distribution on Tuesday at the University of North Texas at Dallas campus in south Dallas.

Each box contained around 27lbs of food and included canned goods as well as fresh produce.

Huge lines of vehicles queued outside the campus grounds and along roads leading to the handout, which served to show the scope of those in need of additional support at this time.

Texas National Guard working with North Texas Food Bank are aiming to deliver nearly 60,000 meals over the next 30 days

Members of the Texas National Guard organize thousands of produce boxes at the North Texas Food Bank Warehouse in Plano, TX for distribution at multiple NTFB events over the next month

The goal is to create at least 60,000 family meal boxes each week for distribution by NTFB and partner agencies