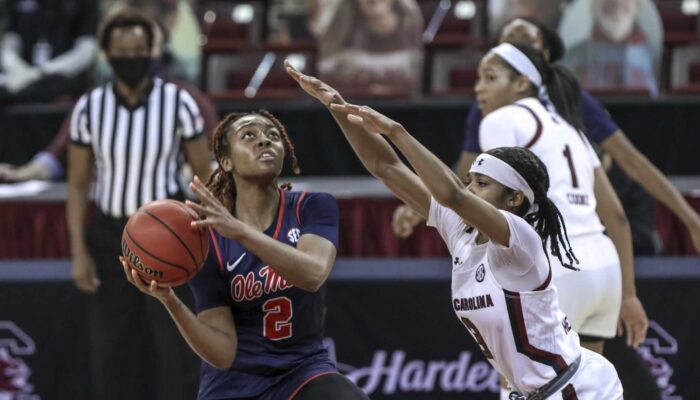 
Turns out the top four teams left out of March Madness won’t have their bubbles burst quite yet.

Under a contingency plan released Thursday by the Division I basketball committees, those four at-large teams that don’t make the original field in the men’s and women’s NCAA tournaments will be placed in order and serve as the replacement teams should any conference with multiple bids have a school that is unable to participate due to COVID-19 issues.

If the tournament begins without any withdrawals, the four would still be eligible to compete in the NIT.

The contingency plan only applies to the short period between the announcement of the brackets — March 14 for men and March 15 for women — and the start of games later that week. Once a tournament begins, any team whose opponent is forced to withdraw would automatically advance to the next round.

If there are COVID-19 issues with a qualifying school leading up to the NCAA Tournament selection, conferences get to designate a replacement team and it will be seeded in the bracket based upon its own body of work.

4of9FILE – Connecticut players celebrate following the women’s NCAA Final Four college basketball championship game against Stanford in San Antonio, in this Tuesday, April 6, 2010, file photo. Connecticut won 53-47. The San Antonio region will host the entire NCAA women’s basketball tournament. The move Friday, Feb. 5, 2021, was made to help mitigate the risks of COVID-19 and matches that of the men’s tournament, which the NCAA said last month will be played in the Indianapolis area.Eric Gay/APShow MoreShow Less

Single-bid conferences likewise can choose their replacement provided the team has gone seven days without a positive test.

Due to the pandemic, the entire men’s tournament will take place in Indianapolis and the surrounding area beginning with First Four games March 18 at Mackey Arena in West Lafayette and Assembly Hall in Bloomington. The Final Four will take place at Lucas Oil Stadium with the championship game scheduled for April 5.

The women’s tournament, which begins with first-round games March 21, will take place in San Antonio and neighboring cities of Austin and San Marcos. The Final Four is set for the Alamodome with the title game April 4.

The basketball committees formulated their contingency plan based on four core tenets: once the bracket is released, it will not be changed or reseeded; it will attempt to ensure a full field before the tournament with no replacement teams once play begins; every participating conference should have at least one team in the field; and the replacement teams should be the best teams considered for an at-large that still remain.

Many of the same rules were used by the Division I competition and oversight committee to create a similar plan for winter championships such as wrestling and gymnastics. The plan also covers men’s and women’s cross country and men’s water polo, which are fall sports but whose champions will be decided in March.

About the Author: DAVE SKRETTA