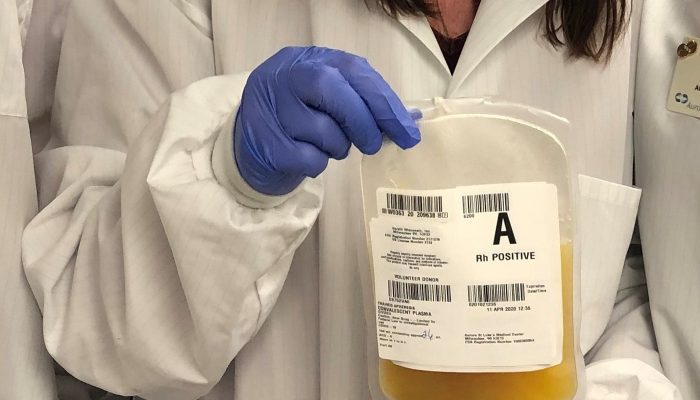 Hospitals and clinics across the country have given plasma from recovered COVID-19 patients to almost 2,600 of those still sick with the disease, and so far no major safety problems have arisen, according to experts who have been tracking the data.

“We have not seen any huge safety signals. The anecdotal evidence is overwhelmingly positive,” said Michael J. Joyner, an anesthesiologist at the Mayo Clinic, who has been monitoring early results as well as setting up a clinical trial of the plasma treatment.

“As doctors, we’re hopeful,” he said. “As scientists, we have to be objective.”

The 2,600 patients include 14 at UW Health in Madison, where anesthesiologist William Hartman said, “We’re quite encouraged by the results that we’ve seen. … Nationally, what we’re hearing is that it does appear to be a very safe treatment”

The technique of using plasma from people who have recovered from a disease to treat others with the same disease goes back more than a century and has been successful in stemming outbreaks of poliomyelitis, measles, mumps and influenza.

The treatment is premised on the idea that plasma from survivors should be rich in the antibodies that have helped them to defeat the virus. The plasma provides the recipient with an immediate immune response, rather than requiring them to wait for their own immune system to kick in.

Although hundreds of clinical trials have been launched testing different vaccines and treatments, none has yet been proven to stop or to prevent the disease caused by the new coronavirus. The virus, first detected late last year, has infected more than 3 million people around the world, killing 208,000, including more than 55,000 in the U.S.

The early results, discussed Monday with the Milwaukee Journal Sentinel, do not come from a clinical trial, but from patients who have been treated under the U.S. government’s expanded access program. The program is meant to help patients now, before rigorous, time-consuming clinical trials have been completed.

“A lot of smart people are looking at the experiences of those 2,600 patients,” said Arturo Casadevall, chairman of molecular microbiology and immunology at Johns Hopkins Bloomberg School of Public Health and one of the leaders of a national program to launch clinical trials of survivor plasma.

Mayo Clinic has a safety monitoring board that is reviewing all of the data on patients treated with survivor plasma under the expanded use program. Researchers at Mayo are also matching patients who have received the plasma treatment with very similar patients who have not in order to compare the two groups.

Transfusion of plasma carries potential side effects, including fever, allergic reactions, and a very small risk of infectious disease transmission.

Casadevall said the early findings show that “the signatures of safety are there and that’s important.”

At the Mayo Clinic, Joyner said that by the early to middle of May researchers may be able to reach the next important milestone: determining how effective the treatment appears to have been in helping COVID-19 patients fend off or recover from serious illness.

It was only six weeks ago that Casadevall and Liise-anne Pirofski, of the Albert Einstein College of Medicine in New York, wrote a paper that appeared in the Journal of Clinical Investigation urging doctors to investigate the use of plasma from recovered COVID-19 patients.

Soon afterward, the National COVID-19 Convalescent Plasma Project was formed. The program has grown rapidly and now includes more than 2,000 hospitals and institutions in all 50 states, Puerto Rico and the Virgin Islands.

The project centers on organizing and fast-tracking clinical trials at various institutions, a process that usually takes years. In the emergency of a pandemic, the process has been moving much faster.

The hospitals and clinics have been collaborating on the project with the American Red Cross, the New York Blood Center, Amazon and Federal Express.

While trials are being launched, researchers are delving into the data from those who have already received plasma under the expanded access program.

“Since we started on the East Coast, we’ve collected probably over 4,000 units of plasma,” said Bruce Sachais, chief medical officer for the New York Blood Center.

While there was an extreme shortage of plasma early on, Sacha said, “Now that we’re able to collect 800 to 1,000 units a day, it’s starting to match the need very well. … Nationally, demand still exceeds supply.”

To be considered recovered from the new coronavirus, patients have to be symptom free for 14 days. The plasma must be tested to ensure that it has a sufficient level of COVID-19 antibodies, and that it is not tainted by Hepatitis B, HIV or other viruses.

Westchester Medical Center Health Network, a 10-hospital health care system based in Valhalla, New York, has treated 145 COVID-19 patients with survivor plasma so far and has identified no problems with the safety.

“All of the patients have tolerated the plasma transfusion,” said  Abhay Dhand, director of Antimicrobial Stewardship and Transplant Infectious Disease for the network. “We are in the process of analyzing the data to try and tease out the impact of plasma transfusion in the outcomes of these patients.”

At UW Health, Hartman said five of the 14 patients, all suffering shortness of breath, were treated before reaching the intensive care unit, and wound up never requiring transfer to the ICU.

“There seems to be a sweet spot where patients are early in that disease process,” Hartman said.

Of the nine who were treated while in the ICU, seven have showed signs of improvement, Hartman said, “and two of them didn’t progress as well as we had hoped.”

It is not clear yet whether the patients who have improved have done so because of the plasma infusion, Hartman said, or because of “exceptional care they are receiving” from nurses and attending physicians.

“It’s not a magic pill,” he said of the plasma. “It does take some time, but the fact that we are seeing some patients get better is very encouraging.”

Aurora Healthcare reported that its hospitals have treated about 15 COVID-19 patients with survivor plasma, adding, “We have seen that plasma transplantation has generally led to improvements in patients with severe COVID-19 symptoms.”

Froedtert Hospital has used survivor plasma to treat six of its COVID-19 patients. One showed relatively quick improvement; the other five have either remained stable or showed gradual improvement since receiving the plasma.

Graham, who is also associate chief of the Division of Infectious Disease at the Medical College of Wisconsin, stressed that the plasma was only one part of the comprehensive treatment provided to the six patients.

Clinical trials will test the plasma treatment on at least three distinct groups of people: those who have been exposed to the virus that causes COVID-19, such as doctors, nurses, first responders and family caregivers; patients already hospitalized with the disease who have continued to grow sicker; and severely ill patients.

Plasma is already being used in some hospitals for experimental compassionate care with the blessing of the U.S. Food and Drug Administration.

Numerous treatments are being pursued by scientists across the globe. Some scientists believe that repurposed drugs that have been found safe for other uses, such as Remdesivir, an unsuccessful Ebola drug, may be the speediest route to an effective treatment for COVID-19. Early testing of Remdesivir has produced encouraging results.

Our subscribers make this reporting possible. Please consider supporting local journalism by subscribing to the Journal Sentinel at jsonline.com/deal.

About the Author: Mark Johnson