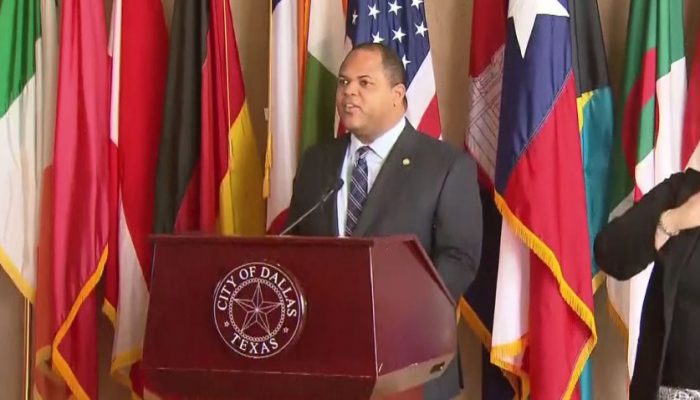 The Dallas City Council Wednesday extended the Mayor’s coronavirus disaster declaration through May 12 and made future changes coincide with any orders from Texas Governor Greg Abbott.

The extension came toward the end of a day-long session in which the city council created several relief programs and approved the receipt of federal relief money.

“The city of Dallas officially began the process of recovering,” Mayor Eric Johnson said. “We are taking action. The city of Dallas expects to take a significant hit to our budget through loss of sales tax revenue. Unlike the Federal Government, we have to balance our budget.”

While some individuals face delays receiving government money, Dallas Chief Financial Officer Elizabeth Reich said $234 million has already been deposited in the city’s account. It is $34 million more than the city of Dallas was expecting for direct expenses related to the coronavirus response and less than what officials expect they will need.

“It could be for employee time related to the direct response, or it could be for contracts that you have already approved or will approve for things like personal protective equipment,” Reich said. “States and localities have also been asking for this money to be available to replace lost revenue.”

For residents and businesses who’ve lost revenue, the city council used some of the money Wednesday for new rental, mortgage and small business assistance programs.

“Some relief is coming. We are doing our best. We are working hard on behalf of them,” said Councilman Omar Narvaez.

Small businesses forced to close in disadvantaged neighborhoods will receive $5 million of the new federal money.

Around $14 million from various sources will fund the rent and mortgage assistance programs.

The support will require applications and the money will not flow until next month. Publicity about the rules and how to apply is being prepared now.

“These are unusual times. I’m hearing daily from individuals who says we need to get some relief,” said Councilman Casey Thomas. “We need to make sure we get this done, we get it done today.”

Member Cara Mendelsohn tried twice during the long Wednesday meeting to get additional City Council oversight of contracts with the housing money, particularly a $1 million allotment to be managed by a non-profit group that would be selected for the task.

“It seems like an extra step for — and these are my words because I’m the City Manager — micro-managing processes that are not policy,” City Manager T.C. Broadnax said.

“It’s going to push us well beyond that time. Here comes the influx of the City of Dallas not being responsive to the need,” Johnson said.

Mendelsohn said emergency City Council meetings could be called if quick approval is required for the contracts.

“My concern is that we have a fiduciary responsibility to the city, to look at contracts. That’s actually our job. That’s not micro-managing. That’s our responsibility,” she said.

The City Council voted against Mendelsohn’s requests and unanimously approved the programs.

Also approved was an ordinance first suggested by City Councilman Adam Bazaldua to delay eviction of tenants who can’t pay rent because of jobs lost to coronavirus.

After several past meetings and long debates, a compromise of 21 days delay was approved Wednesday, instead of the 60 days Bazaldua originally sought, to give tenants time to work with landlords on making payments.

“The premise of the proposed ordinance I put forward is to allow for extra time, and that’s all the ultimate goal is, to provide extra time.  It’s not free rent,” Bazaldua said.

Rent help to be paid to landlords is in the other programs and the delay would give tenants time to arrange that money.

Also Wednesday, the Dallas City Council agreed to spend more than $700,000 for additional personal protective gear for employees and $68,000 for a 12 station shower trailer to serve homeless people being sheltered at the Kay Bailey Hutchison Convention Center.