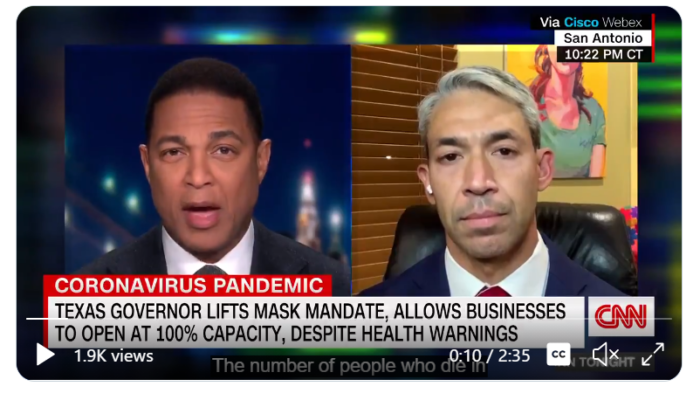 Nirenberg has been a frequent guest on network news channels, throughout the coronavirus pandemic and the recent winter crisis. He discussed Abbott’s decision, which many believe was premature, on the national show. Abbott’s ruling comes as the demand for vaccines remains high and the state recovers from February’s winter storm, which caused households to be cooped up together to stay warm and temporarily shut down COVID-19 testing and vaccination sites.

“It is a tragic and reckless decision to not only bring everything back to full capacity next week, but in doing so, also lift the mask, which is one of the primary ways we’ve been able to slow the spread amidst all the mixed messaging from the federal and state government,” Nirenberg said. “It is a bad call that will unfortunately cost lives in our communities.”

The mayor said he fears another COVID-19 surge, just as the city was gaining control of the virus. This week, San Antonio’s positivity rate dropped to 5.6 percent and deaths and hospitalizations declined, but Nirenberg and Bexar County Judge Nelson Wolff cautioned case numbers may be skewed due to the winter storm.

“Every time we start moving in the right direction the Governor steps in and sets us back and makes all of our jobs harder,” the Houston mayor said. “He minimizes the sacrifices of people and businesses. I just don’t get it.”

Nirenberg said disadvantaged communities and people of color will suffer the “worst” of the effects of the ruling.

“It is a bad call that unfortunately will cost lives in our communities,” says San Antonio Mayor Ron Nirenberg, reacting to Texas Gov. Greg Abbott’s decision to lift the mask mandate and allow businesses to open at 100% capacity. “They’re taking away our first layer of defense.” pic.twitter.com/9cdY9mc1Oe

Metro Health surveillance data shows zip codes in the South and West sides continue to be the hardest hit by the virus. Hispanics, who account for 60 percent of the population, make up 75 percent of local COVID-19 cases, according to Metro Health data.

The city’s latest epidemiological report, which used data pulled on Feb. 7, shows more residents have been vaccinated in the northern and
western areas of Bexar. The report also shows the majority of residents, 43.2 percent, who have received the first dose of the COVID-19 vaccines are white. Black residents account for only 3.8 percent of the people who have been vaccinated.

“We’re going right back into the teeth of this pandemic with nothing but our hopes for more vaccines and our community exercising good common sense, which thankfully most people have done and most people will continue to do,” Nirenberg said. “But again, they’re taking away our first layer of defense.”