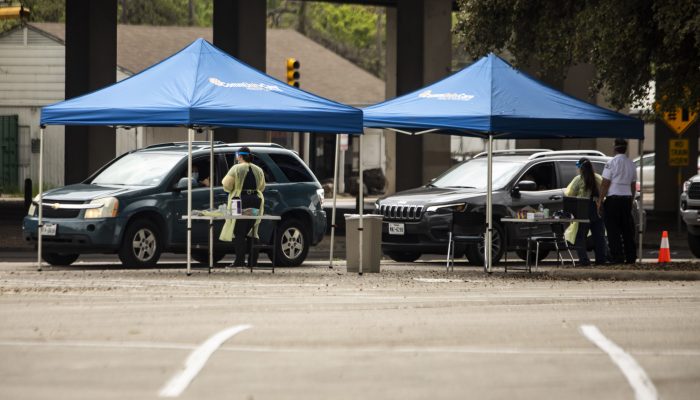 
Latinx communities in Austin have been hard-hit by the coronavirus. Latinx patients account for nearly two-thirds of COVID-19 hospitalizations in the Austin area, and at some sites they are nearly four times more likely to test positive for the coronavirus.

Officials said Thursday they’re forming a task force to address that disparity, which was news to the Latinx advocates who called for one in the first place.

“We are absolutely going to do everything we can to improve the health amongst our Latinx community,” said APH Director Stephanie Hayden.

She said the health authority plans to set up a hotline and pass out informational flyers and it’s working on in-person and online outreach opportunities.

Shortly after the briefing, former Austin School Board Trustee Paul Saldaña said the announcement took him by surprise, as he hadn’t heard much from local leaders about the task force. He and a coalition of other advocates called for one earlier this week after public health officials detailed the coronavirus’ impact on Latinx communities in the Austin area last week.

“Nobody’s speaking with us,” he said. “Nobody’s reaching out to us.”

The spike in hospitalizations and positive cases was something public health officials said they feared from the start of the pandemic.

Latinx Austinites may be more likely to work frontline jobs that require person-to-person contact or they may be more likely to work in construction, a high-risk industry in which 60% of workers declined tests during a recent city COVID-19 testing campaign. On top of that, Latinx Austinites may live in multi-generational households, which could exacerbate coronavirus spread.

Latinx Austinites make up about 34% of the population, while white Austinites are roughly half of the population. The latest numbers from APH show 62.5% of the people hospitalized from COVID-19 in the Austin area are Latinx. Last week, Central Health, which runs seven drive-thru test sites across the city, said at their sites Latinx patients were more than three times as likely to test positive for COVID-19 than others.

Hayden said to address those risks and that overrepresentation, the prospective campaign would rely on outreach in a handful of ZIP codes in areas like Del Valle, Manor and Pflugerville, specifically the areas around:

It’s an idea Saldaña had, along with a handful of other advocates, earlier this week when he called for a task force. Only he hadn’t heard the idea was moving forward. He says the spotty communication has been frustrating.

“We’re losing precious time to really get to the core issue of our concerns, and that is making sure that we’ve got a mitigation plan in place that’s going to lower the numbers and the data that, again, continue to show how it’s disproportionately impacting our Latino community,” he said. “That should be the number one concern, front and center.”

“I’m not certain how they can be putting forward a plan when they haven’t even communicated directly with the coalition that’s asking for there to be a Latino task force,” he said. “And so, it would just be helpful to know the details and to know the specifications.”

Saldaña said he’s spoken with Mayor Steve Adler this week, but hadn’t heard anything concrete from the city after a conference call last weekend and a couple of calls and texts. Still he wants to cooperate in whatever capacity going forward – whatever that looks like.

Adler’s office didn’t provide comment on the task force to KUT, but Saldaña said he was hopeful that the city would roll in some discussion of the task force into an item on the City Council agenda this week that aims to start addressing COVID-19 cases among high-risk workers.

About the Author: Andrew Weber | KUT