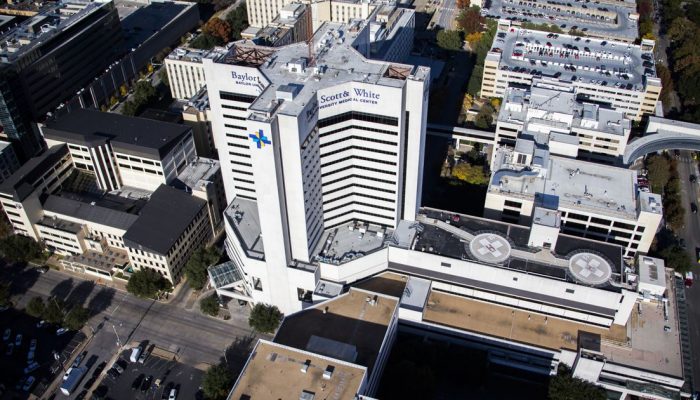 Federal dollars are starting to flow to Dallas-Fort Worth hospitals and medical practices after the government began releasing $30 billion from the giant relief package passed by Congress last month.

Baylor Scott & White Health, whose business stretches from Sherman to San Marcos, already has received $100 million and more may be coming, the Dallas-based company said.

Texas Health Resources in Arlington said it would get about $50 million. UT Southwestern in Dallas, the region’s leading academic medical center, will get about $25 million.

Parkland Health & Hospital System, which cares for many uninsured in Dallas and the broader region, said it will get $12.4 million.

The payments are just the start of the federal coronavirus bailout — $70 billion more will come later from this particular source — and local hospitals badly need the infusion.

“These relief funds are just a fraction of the total COVID-19-related losses we are experiencing,” wrote Baylor spokeswoman Julie Smith in an email.

In all, over 24,000 providers in the state are expected to share $2.09 billion. Only California and Florida have higher total payments than Texas, and the awards are especially attractive.

Unlike the relief bill’s cash advances and tax holidays, these awards do not have to be repaid. And unlike the forgivable small business loans that led to a rush on banks, the money is not first-come, first-served.

Providers “will get these dollars so even if it takes a few days, there shouldn’t be any panic,” Seema Verma, administrator of the Centers for Medicare & Medicaid Services, said last week. “Our priority was on getting these dollars out as quickly as possible.”

The funding passed by Congress was generally intended for expenses related to COVID-19 testing and treatment or to cover lost revenues stemming from the crisis. But recipients are not limited in their options.

“There are no strings attached,” Verma said at a White House briefing on April 7. “So the health care providers that are receiving these dollars can essentially spend [them] in any way that they see fit.”

In addition to helping offset losses, Baylor will use some of the money to gear up for a potential surge in COVID-19 patients. Texas Health said the funds would help offset the high costs of providing care during the crisis, including restocking personal protective equipment and other critical supplies.

At UT Southwestern, some federal money will be used to build up COVID-19 testing capacity, which also requires additional equipment. Parkland said it will use some funds to cover the cost of providing paid leave for health care workers who must take off time because of exposure to the virus.

All four hospital systems emphasized the financial impact from suspending elective surgeries and procedures. That work accounts for much of the revenue and profit among health providers, and it’s been stopped during the crisis to help preserve equipment, bed space and personnel.

The federal money isn’t just going to big hospitals. Dr. Morris Gottlieb, a surgeon whose work has largely been suspended because of coronavirus restrictions, got about $2,500 deposited directly into his practice’s account.

“It just showed up — I didn’t know it was coming,” said Gottlieb, who leads North Dallas Ear, Nose and Throat in Richardson. “I’m totally grateful. At this moment, every penny helps.”

Much more help is coming, although it’s not clear how future dollars will be allocated and whether independent doctors like Gottlieb will get another boost.

Late last week, the government said it wanted to make an “immediate infusion of $30 billion into the health care system,” according to the hhs.gov website. The money was shared with all Medicare providers, based on their portion of 2019 Medicare fee-for-service billings.

Naturally, large hospital systems stand to benefit most because they generate so much Medicare business. But all hospitals are not facing the same COVID-19 demands.

In New York, considered the epicenter of the virus today, hospital leaders complained that distributing money by past Medicare billings was “woefully insufficient to address the financial challenges facing hospitals at this time, especially those located in ‘hot spot’ areas.”

Last week, Verma acknowledged that the methodology shorted some providers, especially pediatricians, gynecologists, children’s hospitals and nursing homes. She said they would be addressed in the second round of funding, “and we’ll have a priority for these organizations and these types of health care providers.”

Rural hospitals are hoping for special attention, too. Revenue is down sharply because of the suspension of elective surgeries and their smaller facilities are more financially vulnerable.

Many don’t have enough cash to cover prolonged days of operating costs, said Don McBeath, advocacy director for the Texas Organization of Rural & Community Hospitals. The group has 157 rural hospitals, ranging from those with two licensed beds to about 200.

A typical rural Texas hospital is expecting to get $300,000 to $400,000 from the first phase of the federal program, he said. That’s enough to cover maybe two weeks of payroll, and that’s how they plan to use the money.

“Many are in serious trouble,” McBeath said. “I’ll be stunned if a couple of these hospitals don’t close down in the next 90 days or so.”

The group is banking on an improved payment system for the next round. McBeath said he didn’t want to complain because any help is welcomed now, and faster is better than slower. But he’s hoping the feds will focus the money where it’s needed most.

“Larger hospitals have more resources to handle these situations,” he said.

Many rural hospitals wanted to apply for small business loans aimed at protecting payrolls. They’re open to companies with no more than 500 workers, and if they hold on to employees, the loans can be forgiven.

But government entities aren’t eligible, he said, and rural hospitals are usually owned by hospital districts, cities and counties.

“We’re pushing hard for a fix on that one, too,” McBeath said.