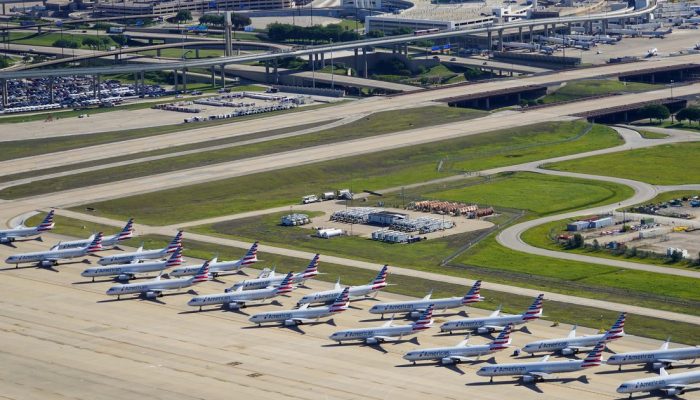 
The absence of jet engine blare over North Texas is another reminder that the COVID-19 pandemic is changing not just who we socialize with, but what we hear, too.

Air traffic is down more than 50% over North Texas in recent weeks, changing not just how often planes fly over communities, but which communities are seeing air traffic at all, according to data provided by Aireon, a company that makes and operates air traffic tracking and surveillance systems.

At DFW International Airport, only 244 planes took off and landed last Tuesday, a decrease of 56% compared with a similar Tuesday in November, which would typically account for about the same number of planes.

At Dallas Love Field, only 97 planes took off and landed last Tuesday, a 53% decrease.

A sky full of airplanes is a signature sight in the Dallas-Fort Worth region, where two of the world’s largest airlines — Fort Worth-based American Airlines and Dallas-based Southwest Airlines — are headquartered. Both airlines have cut schedules by more than 60% since the COVID-19 pandemic and are cutting more flights every day because there aren’t enough passengers.

Communities such as Arlington and Grand Prairie are seeing far fewer planes pass overhead as air traffic controllers funnel airlines into a few preferred routes, according to Aireon. There are also fewer flights over communities such as Plano, Garland, Bedford and Colleyville.

“A reduced traffic load, which is seen in April’s snapshot, means greater ability for the controller to offer the optimal flight path,” said Cyriel Kronenburg, vice president of aviation services at Aireon. “In this situation, there is reduced need for spacing onto the final approach, so the aircraft are turned in earlier to intercept the instrument landing system or visual approach.”

And far fewer planes are engaging in holding patterns over North Texas waiting for spots to open up at the usually crowded airports.

At Dallas Love Field, there are far fewer flights coming from the southeastern direction from Houston and New Orleans.

Zane Adams, an avid plane spotter who runs a local Facebook group, said there is less interest with a decrease in traffic at the airports.

“The big airports are definitely slow,” Adams said. “Not a whole lot to see.”

Popular planes, such as Qantas’ massive A380, haven’t been spotted in weeks.

American Airlines also accelerated the retirement of its Boeing 757 and 767 airplanes, aircraft that were once important for flying between major destinations. The 767, for example, was key in flying transatlantic and South America routes.

Those planes didn’t get a colorful retirement like American’s MD-80 fleet, which the company stopped flying last fall. American grounded the aircraft at the beginning of the COVID-19 pandemic in favor of newer and more fuel-efficient planes.

Air travel is supposed to be depressed for months and maybe years to come. The airline has dozens of gas-sipping 737 Max jets in line for delivery as soon as they get the Federal Aviation Administration’s approval.

But it’s not just the major carriers that have stopped flying. The number of unique airlines coming into DFW has slowed, too.