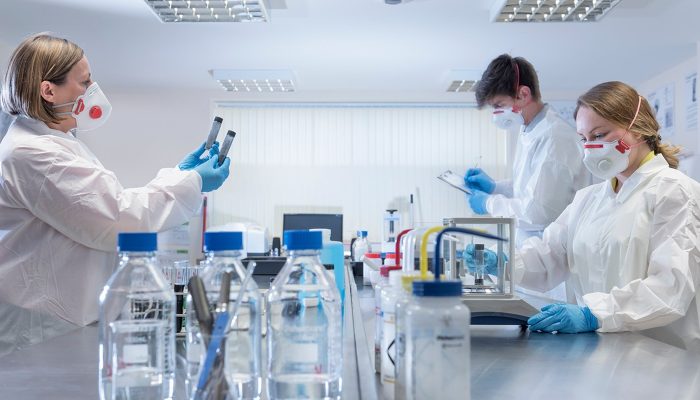 Novartis said today it will carry out a Phase III trial assessing hydroxychloroquine as a treatment for hospitalized patients with COVID-19—a study whose clinical data could strengthen or weaken the case for one of the drugs promoted by President Donald Trump as “a game changer” against the virus.

The company said it reached agreement with the FDA to launch a randomized, double-blind, placebo controlled study, which will recruit approximately 440 patients and use a supply of hydroxychloroquine to be donated by Novartis’ Sandoz generics and biosimilars division.

The trial will be conducted at more than a dozen sites in the U.S., Novartis said. Enrollment of patients will begin “within the next few weeks,” Novartis said, adding that it was committed to reporting results “as soon as possible.”

Novartis also committed to making available any intellectual property within its control related to the use of hydroxychloroquine to treat or prevent COVID-19 widely available “through non-exclusive voluntary licenses, appropriate waivers, or similar mechanisms.”

“We recognize the importance of answering the scientific question of whether hydroxychloroquine will be beneficial for patients with COVID-19 disease,” John Tsai, Novartis’ head of global drug development and chief medical officer, said in a statement.

Novartis markets a generic version of hydroxychloroquine, an antimalarial drug sold under the brand-name Plaquenil® by Sanofi which has also been approved by the FDA for lupus erythematosus and rheumatoid arthritis.

“What do you have to lose?”

For more than a month, Trump has promoted as a treatment for COVID-19 a combination treatment consisting of hydroxychloroquine and azithromycin, an antibacterial which is marketed by Pfizer as Zithromax® or Z-Pak, and indicated for adults with acute bacterial sinusitis, and community-acquired pneumonia. Zithromax is also indicated for acute bacterial exacerbations of chronic obstructive pulmonary disease.

“What do you have to lose?” Trump exclaimed during the April 4 Coronavirus Task Force Briefing, adding: “I just hope that hydroxychloroquine wins, coupled with, perhaps, the Z-Pak.”

On March 28, the FDA issued an emergency use authorization allowing healthcare providers to make available chloroquine phosphate or hydroxychloroquine sulfate to “patients for whom a clinical trial is not available, or participation is not feasible,” adding “FDA encourages the conduct and participation in randomized controlled clinical trials that may produce evidence concerning the effectiveness of these products in treating COVID-19.”

The Trump administration’s apparent embrace of the combination treatment has come despite concerns expressed publicly by Anthony Fauci, MD, Director of the NIH’s National Institute of Allergy and Infectious Diseases, that more data was needed on the safety and efficacy of the drugs.

The combination of hydroxychloroquine and azithromycin, and monotherapies of both, are among the most-mentioned “front runners” therapeutics as categorized by GEN in its updated A-List of COVID-19 therapeutics in the works: “Vanquishing the Virus: 160+ COVID-19 Drug and Vaccine Candidates in Development,” published last week.

According to the study, “100% of patients treated with hydroxychloroquine and azithromycin combination were virologicaly cured comparing with 57.1% in patients treated with hydroxychloroquine only, and 12.5% in the control group.” The study’s corresponding author, Professor Didier Raoult, MD, PhD, of l’Institut Hospitalo-Universitaire (IHU) Méditerranée Infection in Marseille—who discussed the results in a YouTube video posted March 17—has been appointed by the French government to research possible COVID-19 treatments.

“Does not meet” standard

However, more than two weeks later on April 3, the society that publishes the journal where Raoult’s study appeared, the International Society of Antimicrobial Chemotherapy, issued a notice stating that the study “does not meet the [Society’s] expected standard, especially relating to the lack of better explanations of the inclusion criteria and the triage of patients to ensure patient safety.” The Society added: “Despite some suggestions online as to the reliability of the article’s peer review process, the process did adhere to the industry’s peer review rules.”

A Chinese research team published positive results for hydroxychloroquine in COVID-19 patients, concluding March 18 in Cell Discovery that: “HCQ can efficiently inhibit SARS-CoV-2 infection in vitro. In combination with its anti-inflammatory function, we predict that the drug has a good potential to combat the disease. This possibility awaits confirmation by clinical trials.”

Another Chinese team concluded that chloroquine and Gilead Sciences’ Remdesivir were “highly effective in the control of 2019-nCoV infection in vitro,” according to a study published February 4 in the Nature-owned journal Cell Research that added: “They should be assessed in human patients suffering from the novel coronavirus disease.” Another Chinese team reported March 4 in Clinical Infectious Diseases that “Hydroxychloroquine was found to be more potent than chloroquine.”

However, neither the French nor Chinese studies were randomized clinical trials. The French investigators also acknowledged the “small sample size” in their conclusion—as cited by critics, along with the side effects of hydroxychloroquine. Critics also cite the death of a man after he and his wife ingested fish tank cleaner containing chloroquine phosphate; the death was disclosed March 23 by healthcare provider Banner Health, which added that his wife was in critical condition at a Banner hospital. Supporters of chloroquine phosphate have countered that the couple ingested a far higher dose than a doctor would have prescribed.

On April 2, Incyte and Novartis said they planned to launch a Phase III clinical trial (RUX-COVID; NCT04331665) to assess the efficacy and safety of Jakafi/Jakavi plus standard-of-care (SoC), compared to SoC therapy alone, in patients with COVID-19 associated cytokine storm. The trial was not yet recruiting patients as of April 13

The company added that it had also granted requests for investigator-initiated trials for COVID-19-related clinical studies of ruxolitinib, canakinumab, and three other drugs whose branded versions are marketed by Novartis:

Announcement of the hydroxychloroquine trial comes a month after Novartis committed to donating 130 million tablets of generic hydroxychloroquine to support global COVID-19 pandemic response efforts—including 30 million tablets that the pharma giant said it has already donated to the U.S. Department of Health and Human Services for the U.S. Strategic National Stockpile.

Further shipments overseas will be dispatched based on requests from governments around the world, the company said.

“We are donating hydroxychloroquine tablets for COVID-19 patients including for use in this and other clinical trials with the hope that researchers and healthcare workers can quickly and scientifically determine whether hydroxychloroquine can help patients around the world combat this disease,” said Richard Saynor, CEO of Sandoz. “We will continue to fulfill orders for existing customers to ensure the medicine remains available to US patients who rely on it for other indicated uses.”