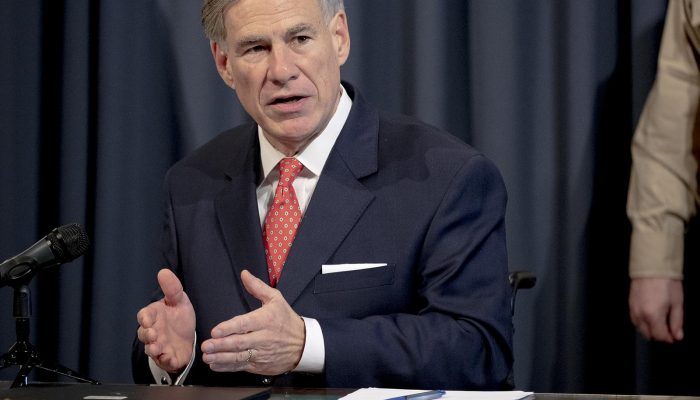 
Gov. Greg Abbott is expected Monday afternoon to announce a major reopening of the Texas economy. He has some encouraging numbers to take with him.

The state’s coronavirus outbreak has continued to slow. The positive rate for Texans tested for the new coronavirus was down below nine percent as of Sunday, its lowest since April 6, according to state data. About 5,000 more tests were completed per day in the past week than over the previous seven day-average. The number of new daily COVID-19 cases looks to be holding steady.

Despite the progress, it’s not clear that the state has met the benchmarks set by the Trump administration to begin safely reopening for business. That includes a steady two-week decline in cases or positive test rates, and a big enough expansion of testing.

Abbott hinted last week that he could allow re-openings in cities and counties where the outbreak is waning and where there is enough access to hospital beds. His announcement is expected to take effect later this week, and be done using social distancing and other strategies to contain the spread of the virus. The governor will also have to address his statewide stay-at-home order, which is set to expire Thursday night. His announcement is scheduled for 2:30 p.m.

Public health experts have said robust testing and contract tracing — tracking down contacts of those who have been infected — are pivotal to preventing new outbreaks as states begin rolling back restrictions.

Texas has about 800 people doing contract tracing now, with plans to enlist more, according to the Department of State Health Services. Many of those tracers have been volunteers overseen by local public health authorities.

The state has now tested more than 270,000 Texans, and is seeing about 13,000 daily tests, on average. Abbott said last week the state will need to test about 25,000 to 30,000 people per day to adequately monitor new outbreaks going forward.

More than 24,000 Texans have tested positive for the virus, and nearly 650 have died. In Harris County, which has seen the biggest outbreak, the number of new daily cases has continued to fluctuate. The county is now up to more than 5,600 cases since March.

Several rural counties still have tested few if any people, according to the most recent preliminary testing data, which is from mid April. The state has not released more detailed and up-to-date county-level data.

Abbott has not made it clear whether he will mandate masks in public, as have cities including Houston and San Antonio. Dallas, Austin, and have similar orders in place.

“I’m not sure that will be a state mandate, but certainly it is a practice that is going to be encouraged,” Abbot said in a television interview Thursday.