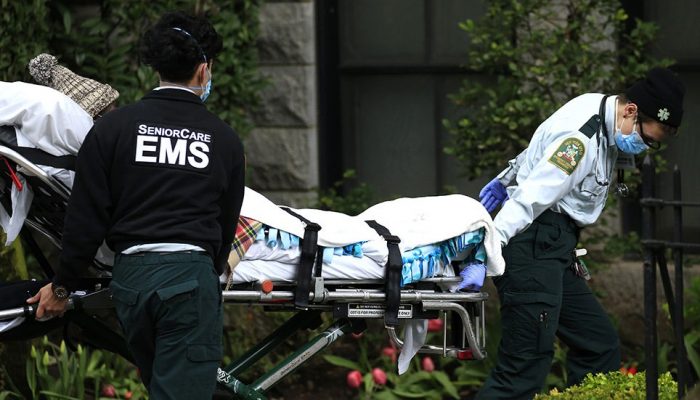 More than three months since the coronavirus first appeared in a Seattle-area nursing home, facilities are still struggling to contain its spread.

According to federal data collected and released publicly for the first time this week, thousands of nursing homes across the country lack basic personal protective equipment (PPE). Facilities are also facing staffing shortages, and many are even running out of hand sanitizer.

Meanwhile, testing among residents and staff remains scattershot, despite federal recommendations. Some states have begun mandating tests, but disagreements over who will pay means that potentially sick residents and staff will not be identified and isolated.

Advocates say states and the Trump administration have failed to ensure operators of nursing homes are protecting the most vulnerable as COVID-19 devastates many facilities.

At least 32,000 residents and about 600 staff members have died in nursing homes due to COVID-19, according to the Centers for Medicare and Medicaid Services (CMS), and that number is likely to rise as more facilities report numbers.

Meanwhile, more than 95,000 COVID-19 cases have been confirmed in nursing homes, while more than 53,000 presumed cases are suspected, according to CMS.

“We had an opportunity at the outset of the pandemic to target resources, target funding to help with the excess costs” of protecting nursing home residents and staff, said Katie Smith Sloan president and CEO of LeadingAge, the association of nonprofit aging services providers.

“We pleaded, asked, begged, and we were ignored month after month. We knew residents and workers were hit particularly hard, and the data shows the devastating price of the failure to target resources,” Sloan said.

Other numbers from CMS, while incomplete, also paint a grim picture of the impact of the virus on nursing homes.

Nearly 2,000 nursing facilities reported a shortage of staff, according to the CMS data, with clinical staff shortages in over 300 facilities. More than 2,200 nursing homes said they don’t have enough aides.

Agency officials said 88 percent of the country’s 15,000 nursing homes reported data, and until every facility reports, the numbers are likely to fluctuate, especially based on the availability of testing.

The Trump administration urged states to test every resident and staff member, but did not mandate it. States ultimately passed the responsibility onto counties and nursing homes, resulting in individual, uncoordinated plans.

“The federal government is not really taking the leadership in what needs to happen, where tests should go, what the actual rules are,” said Toby Edelman, senior policy attorney for the Center for Medicare Advocacy, a group that advocates for nursing home residents.

Some states have mandated universal testing of residents and staff, but have not committed to paying for it.

The tests are expensive, there aren’t enough reliable, rapid diagnostic tests available, and nursing homes lack the manpower to accomplish it.

“The resources just haven’t been there,” Mina said.

“It was an extraordinary effort to get Massachusetts nursing homes tested just once. And they had about five weeks to do that. It was a massive, massive effort with a tremendous number of people involved to make it happen. And so the thought of doing that every week, it just wouldn’t be feasible,” Mina said.

CMS Administrator Seema Verma said Medicare will cover the costs of testing residents if there’s a suspicion of an outbreak, but nursing homes are responsible for testing the staff.

She said states should be able to cover the costs because of $11 billion in CARES Act funding that is meant to be used exclusively for testing.

“We feel like there’s adequate testing with the $11 billion that has been provided to states, and they can support their nursing homes,” Verma said on a recent call with reporters.

The American Health Care Association, which represents for-profit nursing homes, has lobbied for an additional $10 billion to help fund expedited testing and additional staffing. The group said it would cost more than $1 billion to test every staff member weekly.

But testing is just one part of how states and nursing homes should be prepared to protect their residents. One of the other methods is effective infection control measures.

Verma lauded the efforts of some nursing homes that made “stringent efforts” to screen staff and enforce hand-washing. She said those facilities saw fewer, if any, outbreaks of COVID-19.

Many of the nursing homes with high rates of infection and deaths had previously received low quality scores.

Yet the nursing home industry has long argued individual facilities should not be held responsible.

Nathan Boucher, an assistant research professor in the Sanford School of Public Policy at Duke University, said he agreed with that assessment on responsibility.

The nursing home population was going to be at risk no matter what, he said.

“This is a particularly virulent form [of coronavirus], and the demographic that is in these facilities, and these older folks medically complex seriously ill, who are in a system of care that has been long neglected and underfunded,” Boucher said.

About the Author: Rafael Nam