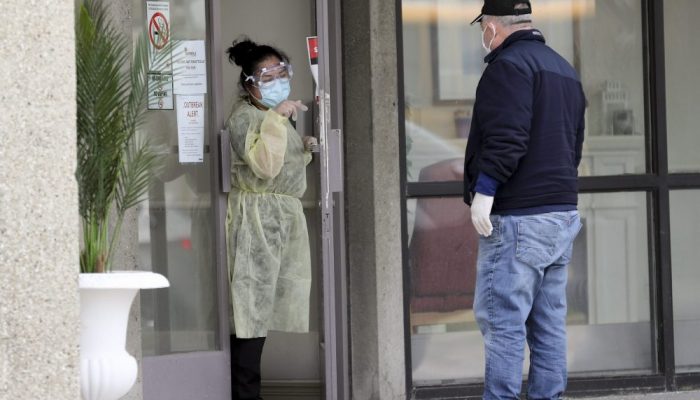 The head of the organization representing Ontario’s doctors says the government last week rejected multiple offers by the province’s physicians that would have increased doctor-led medical support in long-term care homes, where the impact of COVID-19 has been catastrophic compared to the general public.

One of the proposals from the Ontario Medical Association (OMA) was to set up mobile doctor-run COVID-19 assessment centres at long-term care homes (also known as nursing homes), according to the group’s president Dr. Sohail Gandhi. Assessment centres have been set up across the province but not specifically at nursing homes. Long-term care homes are required by law to have a physician on staff as their medical director, according to a Ministry of Health spokesperson. Doctors who aren’t employed by homes typically provide care by appointment.

Gandhi told doctors in an email late Wednesday night that Ministry of Health had rejected the OMA’s ideas to support nursing homes after the group voiced that it was opposed to government’s advance payments loan program.

“Our aim was to ensure that residents are comforted regardless of treatment options. The government rejected all these proposals,” Gandhi told iPolitics in a statement emailed by a spokesperson of the organization on Thursday.

Gandhi took a more pointed tone in his email to doctors, referring to the decision to reject the OMA’s pitches as “short-sighted” and “unconscionable.”

While a spokesperson for the ministry said it has “responded quickly to OMA requests to enable physicians to provide virtual services, including virtual palliative care,” she said it would not otherwise weigh in on the negotiations between itself and doctors.

“The ministry respects our normal negotiating and communications protocol with the Ontario Medical Association whereby the parties do not disclose or discuss the details of proposals that are under consideration. It would be inappropriate to comment on the possible outcomes prior to the results of those discussions,” Ontario Ministry of Health spokesperson Anna Miller told iPolitics in an email on Friday.

Nursing homes have become especially susceptible to COVID-19 in Ontario. There had been 573 deaths among residents and patients in Ontario nursing homes by Friday, according to the provincial government. Ontario also reported 763 deaths due to the coronavirus by the same time. There have been outbreaks at 131 long-term homes in the province, with 2,287 residents and 1,089 staff testing positive for COVID-19 as of Friday.

Data collected about patients from around the world have shown that elderly people are at a much higher risk to the coronavirus than younger people. The total number of reported cases of COVID-19 in Ontario since the outbreak began was 13,519 on Friday, though more than half of those have recovered.

The OMA and the Ministry of Health have been negotiating throughout the pandemic about how doctors who charge the government fee-for-service can overcome hurt incomes. Many doctors have had to pivot to mostly treating patients through swiftly-implemented Telehealth and virtual care systems that have new claim codes, which weren’t approved as quickly as physicians began using them, thus keeping payouts behind.

In a March 20 email, members of the OMA were told by the organization that it had raised the prospect of income stabilization with the government and that both sides had agreed to start discussions on compensating doctors during the pandemic.

A source familiar with the negotiations between the OMA and the provincial government said the prospect of doctors supporting long-term care homes directly was brought up in negotiations around three weeks ago, when data began suggesting that nursing homes were going to be especially vulnerable in Canada’s fight against the epidemic. iPolitics agreed to grant the source anonymity to allow them to share details about the negotiations.

The province announced earlier this week it would move ahead with a cash advance program, which it says will help doctors keep their clinics open during a time when their billing has seen a dip. The loan program gives doctors up to 70 per cent of their clinic’s income over three months, backdated to March. Any money received by doctors will have to be repaid between November and next March.

In a letter addressed to Elliott on Tuesday, Gandhi says the OMA’s board of directors called the advance payments program “totally deficient in meeting the needs of the health care system,” and asked for the government to return to the negotiating table. The next day the government rejected the OMA’s proposals for more doctor-led support at long-term care homes, according to Gandhi.

Hayley Chazan, a spokesperson for Ontario Health Minister Christine Elliott, said on Friday that doctors will begin being able to receive pay for newly-approved billing codes in early May.

“Physicians will effectively be paid for two months’ worth of claims in June,” Chazan told iPolitics by email.

Also last week, Ford asked for the military’s help staffing five nursing homes in the province that have been most severely impacted by COVID-19.