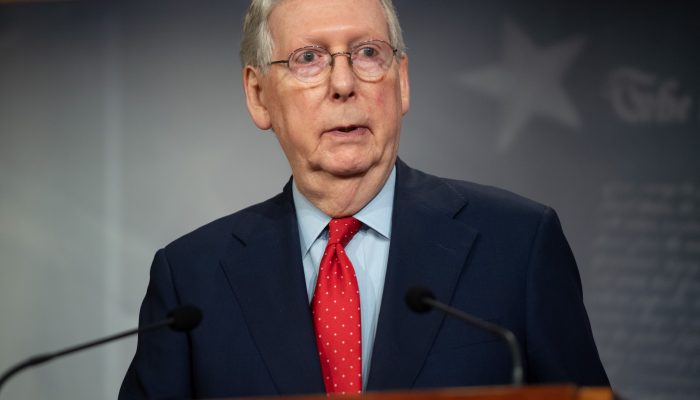 
On The Street #5 here. The stock market recovered last Friday—thanks to news that oil emerged from its lows and more bailout cash from Congress was on its way. Still the S&P 500 ended down 1.3 percent for the week. Not bad considering another 4.4 million people signed up for unemployment benefits. (Total now: 26 million-plus). Ok, lots of Texas stuff in the column this week—forgive me. But first, anyone up for a Lysol Stinger?

Twilight Zone Economics: Sounds like Senate Majority Leader Mitch McConnell is spending too much time on the bourbon trail or something. As you may know, McConnell recently caused a big rumpus when he said bailing out states and municipalities—mostly blue, surprise!—was a bad idea. Yup, just go bankrupt, fire first-responders, nurses and teachers and then get on with the pandemic. But if you’re a fan of Mitch-nomics, consider this: the top five states in terms of coronavirus cases—New York, New Jersey, Massachusetts, California and Pennsylvania—accounted for more than 32 percent of the country’s GDP, according to 2019 year-end stats from the Bureau of Economic Analysis. Throw in five more blues—Michigan, Illinois, Washington, Virginia and Maryland, all hard-hit by the pandemic—and you’re talking more than 46 percent. (Mitch’s Kentucky? 1 percent.) Prediction: more out-of-state cash for Amy McGrath, who may face the majority leader—aka the “Marie Antoinette of the Senate” said Rep. Pete King— in the November election.

Ted Cruz v Harvard: The Texas senator tweet-slammed Harvard for planning to take $9 million in federal bailout money to give to students in need. He said it was a bad thing because Harvard had a huge endowment, $39 billion, among other things. True, they do. But maybe he should have pointed out that Texas colleges got theirs too—not that there’s anything wrong with that. According to the Texas Tribune, for instance, Texas A&M’s main campus hauled in $40 million worth of bailout bucks. They had an endowment of around $13 billion, pre-oil crash, or # 7 in the country according to US News and World Report. For sure, not a Harvard, which certainly dwarfs A&M’s endowment on a total and dollar per-student basis. But not chump change either. (Harvard decided not to accept the money from the Higher Education Relief Fund.) But this is not be a surprise to those familiar with the senator’s base-centric playbook. If you recall, he whined about a 2013 Hurricane Sandy relief bill for the Northeast, claiming that it was filled with “pork.” But then he had his hand out for federal aid after Hurricane Harvey devastated Texas in 2017. No one really complained about helping the Lone Star State, other than pointing out that Cruz was kind of two-faced about it. And wrong about the pork, too.

U.S. Senate Majority Leader Mitch McConnell at the US Capitol in Washington, DC, April 21, 2020. He has sparked a strong reaction from fellow lawmakers after suggesting that states struggling with the economic impact of the coronavirus could declare bankruptcy.
SAUL LOEB/Getty Images

Speaking of Bailout Money: One of the more disappointing business stories of the past few weeks? Big companies that took money from the Small Business Administration’s Payment Protection Program by leaping through a loophole—and leaving real small businesses high and dry. (For example: it’s ok to count a single franchise location as a separate “small” business.) But a few of the big guys have apparently repented and are returning the money. Shake Shack, founded by NYC restaurant celebrity Danny Meyer, is sending back $10 million; Ruth’s Cris Steak House chain ($20 million); and AutoNation’s board of directors, reported the Washington Post, voted to return close to $80 million to the SBA program. Others returning cash: Kura Sushi USA, Sweetgreen and the Potbelly Sandwich Shop empire, which held onto its $10 million until this past weekend. Now, everyone is horrified this could happen at the expense of dry cleaners and flower shops. But no one looks good, mea culpas aside— from the companies that willingly loophole-jumped to the banks that helped them and the lawmakers who wrote the legislation. I’ve been covering the business world since dinosaurs roamed Wall Street. I know this: everyone knew exactly what they were doing. They just got caught.

Maybe They Should Run the Pandemic Response: If you’re a fan of business stories, one of the best appeared recently in the Texas Monthly. It showed how the supermarket chain, H-E-B responded to the COVID-19 crisis by being, well, actually prepared. Texas-based H-E-B prepped for the COVID-19 as far back in January when its execs began hearing from suppliers and retailers in China, Italy and Spain that there was a Texas-big problem brewing. H-E-B has, in fact, worked on emergency response for pandemics and influenza as far back as 2005 during the H5N1 spread in Asia. H-E-B’s emergency response team —yes, they have one— sprung into action after the first case in Texas in early February. Over the next month, as a result, H-E-B execs reduced store hours—to allow for restocking—gave employees raises, initiated safety rules and adjusted sick leave policies. Things haven’t been perfect—there have been some positive COVID-19 tests among employees and some empty shelves say local press reports. That said, Texas Monthly piece is a pretty cool case study.

Loose Change: Is there an interview that Dr. Fauci won’t turn down? He was on New York’s Yes Network last week talking about the possible return of baseball. Then, there he was again on ESPN during the opening of NFL draft night. “Curb Your Enthusiasm” next?…A great quote citation goes to Dallas County Judge Clay Jenkins after his commission voted to extend stay-at-home orders a couple of weeks beyond what Texas Governor Greg Abbott stipulated. He wasn’t worried about incurring Abbott’s wrath, the Dallas Morning News reported. “If I’m wrong,” he said, Abbott “will quickly tell us—and tell us that we have to let everybody play pick-up basketball and do whatever they want to on April 30″… Finally, I know. I’m like your old, classic rock, uncle. But if you like protest songs—and who doesn’t?— check out Midnight Oil’s “Beds are Burning.” The 1987 song is about giving land back to Aboriginal Australians, but could easily be adopted by climate-crisis folks now. In any case, almost 155 million YouTube views and counting… See you next week, keep safe and give generously to local charities on the front lines.

Hank Gilman is Newsweek’s editorial director. He’s also worked at Fortune, The Wall Street Journal and the Boston Globe—and is the author of You Can’t Fire Everyone, a management memoir you can buy for pennies on the dollar now.