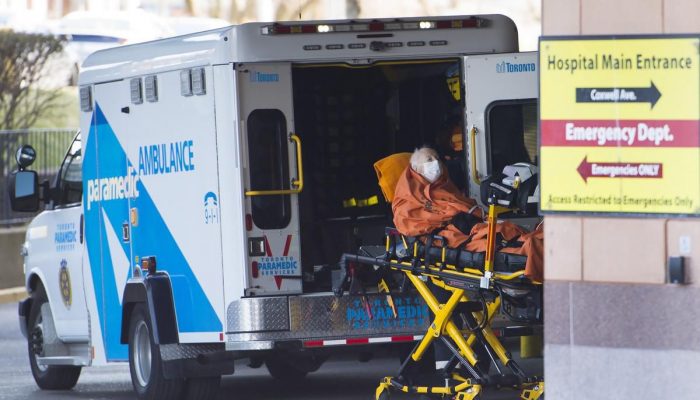 
The next two weeks will tell the tale of how soon Ontario can ease restrictions on the economy, chief medical officer Dr. David Williams says.

Official numbers of new daily COVID-19 cases, stripping out some highs and lows, are generally in the mid-400 range and coming closer to the benchmark of fewer than 200 new infections through community spread, he told a daily briefing Thursday.

“It’s looking promising,” said Williams, who noted the province has had almost of week of steady declines and wants to see a two-week trend.

With new cases in nursing homes accounting for about half the total of new cases daily, the target on community spread is in sight.

He added that’s a level that allows public-health units across the province to properly track each new case and isolate contacts as necessary to stop the chain of transmission.

Premier Doug Ford acknowledged people are eager for more freedoms, but urged them to continue with physical distancing and other precautionary measures.

“We are winning this fight,” he said. “The trends keep going in the right direction.”

One troublesome sign was that the number of people in Ontario hospitals for COVID-19 continued to rise, reaching 999 — an increase of 25 per cent in less than two weeks.

Another 22 patients have been admitted, the Ministry of Health reported Thursday as it lifted a freeze on discharging nursing-home residents who have recovered from illnesses back to their lodgings.

There was also a warning about filling too many empty nursing-home beds at a time when 75 per cent of Ontario’s deaths from the new coronavirus have been in long-term care.

Williams said nursing-home deaths are expected to peak “sometime in the next week.”

Despite long waiting lists of about 35,000 people, a directive asked nursing homes to be cautious in admitting new residents given the risks of COVID-19, which spreads quickly in close quarters.

“All homes are asked to consider the ability to isolate, in the event of an outbreak, in their rate of admission,” said the two-page memo signed by deputy health minister Helen Angus and other senior bureaucrats.

People living in the community awaiting nursing-home beds can be admitted as long as they have tested negative for COVID-19 within the previous 24 hours, the nursing home is not in outbreak and they can be isolated for two weeks.

At least 190 of Ontario’s more than 600 nursing homes have had outbreaks. There have been 2,400 residents — including Ford’s mother-in-law — and almost 1,200 staff infected, with two personal support workers dying.

Officials have said most of the new hospital admissions since mid-April have been from nursing homes, which prompted Ford to call in military medical teams and squads of hospital staff to help out.

The freeze on hospital discharges was implemented April 16 with dozens of long term care facilities in crisis because of rapidly spreading outbreaks of the novel coronavirus and staff shortages from workers falling ill to it.

Patients sent to hospital from nursing homes can now be returned providing the homes are not have outbreaks and as long as the resident has tested negative for COVID-19 and can be kept in isolation for 14 days, according to the new directive.

Hospital patients who need nursing-home beds but have not been living in a long term care home cannot be admitted to one, although precautionary measures are being considered to make that possible, the directive added.

A Star compilation of data from Ontario’s public health units as of 5 p.m. Thursday showed an increase of 402 confirmed and probable cases of COVID-19 in the previous 24 hours to a total of 17,469 since the virus first came to the province in late January.

At least 10,000 people have recovered, the Ministry of Health said, while the source of infection in 6,000 cases has not yet been traced by public health units, which have been scrambling to keep up with the volume of cases.

About the Author: Rob Ferguson