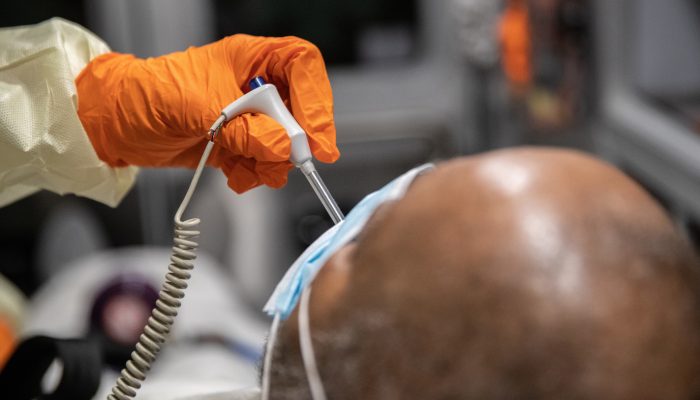 A hospital patient in Stamford, Conn., who has COVID-19 symptoms gets his temperature checked. Severe infections with the novel coronavirus have been unusually high among African Americans and Latinos in many hospitals.

A hospital patient in Stamford, Conn., who has COVID-19 symptoms gets his temperature checked. Severe infections with the novel coronavirus have been unusually high among African Americans and Latinos in many hospitals.

Our patient in the emergency bay was not doing well. Beads of sweat lined his forehead and his eyes were closed; all of his energy was focused on breathing. Despite all of his efforts, he was sleepy and confused, telltale signs that his brain was not getting enough oxygen. He would inevitably need intubation — heavy sedation and a breathing tube — to prevent things from quickly getting worse.

I had to ask his son, a man in his early 20s, if it would be within his dad’s wishes to intubate him. The young man was shaking with fear, too scared to speak aloud an answer. There were no other family members to help make this tough decision. As a black physician, I (Dr. Khidir) couldn’t help but notice that once again it was a patient of color who was critically ill from what was almost certainly COVID-19.

Across the United States, we are seeing alarming statistics about the disproportionate toll of COVID-19 on Latino and black people. In New York City, the New York Times tells us, coronavirus is twice as deadly for these minorities as for their white counterparts. In both Chicago and Louisiana, black patients account for 70% of coronavirus deaths, even though they make up roughly a third of the population.

In the emergency room, conversations about a patient’s end-of-life wishes are taking place in broken Spanish, seconds before they get intubated. In the intensive care unit, doctors barely have time to update family members, because they’re too bogged down by patient-care tasks to call an interpreter. For patients healthy enough to go home, our usual script around social distancing falls short, as many of our black and Latino patients are unable to self-isolate within large multigenerational households. In addition, many of these patients either are essential workers or live with one — they cannot simply “stay home”.

In a pandemic that has stretched U.S. health care resources thin, it’s not surprising to see a worsening of already existent health care disparities. Several states and organizations have started to release Crisis Standards of Care guidelines in recent weeks — these are meant to help hospitals ration critical resources like ventilators and intensive care unit beds, if and when the need is dire.

The overall aim of such guidelines, which can vary in their specifics from state to state and hospital to hospital, is to allocate limited resources to the people who are most likely to benefit from them.

To determine which patients get priority in treatment, several of the CSCs published so far, such as guidelines from Colorado and Massachusetts, recommend that the hospital use frameworks that include the patient’s age and “SOFA” score (a measure of how critically ill the patient is at arrival, based on objective laboratory values). Importantly, they also include what we doctors call “comorbidities” — other, underlying medical conditions that can put patients who are infected with this virus at a higher risk for worse outcomes.

Although the foundational principle of Crisis Standards of Care guidelines are utilitarian and aim to benefit the greatest number of people while treating “individual cases fairly,” a system that penalizes on the basis of comorbidities will undoubtedly and unfairly penalize the populations that are already more vulnerable to those conditions.

Furthermore, given the novelty of COVID-19, we still don’t have a complete picture of which factors lead to worse outcomes. While some data suggest that patients with severe COVID-19 are more likely to have hypertension or respiratory or cardiovascular illnesses, there are also findings suggesting that men have more severe disease than women. Yet, the Crisis Standards of Care are not factoring sex into their scoring system. This means that we are arbitrarily choosing metrics to guess which patients will do better, and we’re doing so at the expense of populations that have historically been marginalized by the health care system.

COVID-19 is already affecting and killing a disproportionate number of black and Latino patients across the United States. Using comorbidities as a proxy for disease severity to allocate resources, without taking into account race and ethnicity, will almost certainly mean that racial and ethnic minorities will be placed in the “back of the line” for critical care resources.

In order to do the greatest good for the greatest number of people ethically and fairly, standards of care must be informed by the existing inequalities in our country.

While we’re not suggesting that comorbidities be removed from crisis standards of care altogether, we urge states to reevaluate current guidelines and include only major comorbidities with a known short-term impact on a patient’s prognosis.

States should also track and make publicly available demographic data — including race and ethnicity — for patients hospitalized with COVID-19 in order to ensure that people of color are not being denied resources disproportionately. Lastly, states should ensure that the committees designing crisis standards of care are composed of a racially and ethnically diverse group of individuals in a way that is representative of their population.

It was devastating enough to have to tell my African American patient’s young son that his dad’s illness was so life-threatening we needed to place a breathing tube down his throat and send him to the intensive care unit. I can only imagine how he would feel if, in some unfortunate circumstance, we would have to tell him that his father would need to be taken off the ventilator to conserve resources.