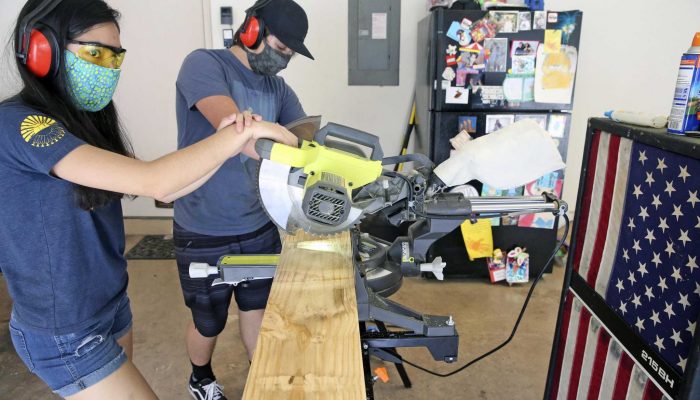 
It’s hard to ponder the putative upsides of the coronavirus, short of the ways it’s pulled (some) Americans together and turned nurses and doctors into national heroes.

But for two San Antonio teen sweethearts, the pandemic truly has revealed a silver lining — one in which they’ve helped others enjoy the curative power of gardening as they’ve simultaneously raised money for good causes.

Amelia Quijano, 16, and boyfriend Micah Benson, 17, classmates at a charter high school who’ve dated for about a year, turned a fun Spring Break project into a thriving raised garden bed enterprise, using a Japanese technique that dates back hundreds of years.

The young couple has sold more than 25 of the beds in varying sizes, along with decorative garden benches and wooden compost structures.

Their work ethic has enabled customers to indulge in so-called “dirt therapy” — working in the soil to cultivate fresh vegetables or flowers while working off stress during these trying times.

And they’ve indulged their own charitable impulses: The two donated a garden bed and bench to a silent auction for a nonprofit that helps breast cancer survivors — Amelia’s mother, Danae Quijano, has been in remission from the disease for six years. Amelia has also donated some of the proceeds to the San Antonio Zoo, where she volunteers.

Do you know someone who is making life a little better for others during the coronavirus pandemic? Email Melissa Fletcher Stoeltje at mstoeltje@express-news.net or leave a message at 210-250-3226.

The two are a bit surprised — but also gratified — that their project-turned-company has struck a chord during the pandemic.

“I think one main reason people want to garden right now is because they’re scared,” Amelia said. “They want to build their own gardens and grow their own food in case something crazy happens. And I think more people are just appreciating nature right now.”

For Micah’s part, it’s all about building something durable in precarious times.

“It’s just fun to create something that others will use and keep using for quite a while,” he said.

It started with two beds

They were casting about for a good project to occupy their time during Spring Break, in the period before authorities officially shut down all the schools.

Amelia had long-admired the backyard gardening efforts of her boyfriend’s parents, Duane and Rebekah Benson, who live near Woodlawn Lake on the West Side.

She decided they would replicate their raised bed gardens in the Quijanos’ backyard in a Northwest Side subdivision, in an area of the yard not far from a trampoline. The couple made two 4-foot by 8-foot beds, one for vegetables, the other for flowers.

On ExpressNews.com: Making a Difference: Facebook group relishes ‘giving it away’

A “proud mom,” Danae posted pictures of the beds on her Facebook page and Instagram account during the first week of the city’s stay-at-home order. Not long after, a Facebook message dropped from a friend: I want one of those beds.

After that, it was “like dominoes falling,” said Danae, as word spread and orders flowed in for the beds, which Amelia and Micah create using Shou sugi ban, an 18th century Japanese technique in which the wood is briefly charred by a flame.

The burning weatherproofs the wood and causes its grain to darken and emerge in a beautiful pattern.

Amelia and Micah were soon spending hours each day in the Quijanos’ two-car garage. They’ve worked almost nonstop to fill orders, which soon included a decorative garden bench, which is rubbed with a coating to make it shine.

The kids came up with a name — M & A Garden Beds, Benches and More. Amelia’s parents — Danae, who retired this year after 20 years in human resources at AT&T, and Frank, a data engineer at USAA — offered the teens business guidance.

“It just started evolving on its own,” Danae said. The youths also created their own Facebook page as well as an email, magardenbeds@gmail.com.

The success came at an opportune time, Amelia said.

“We just figured this could be our summer jobs, since there aren’t many summer jobs out there right now,” she said.

On a recent sweltering afternoon, the teens were hard at work, cutting planks of wood to fill an order for a bench.

Donning masks — they always were masks — along with gloves and goggles, they cut wood using an electric miter saw while wearing ear muffs to soften the loud whine.

Then they took turns using a propane torch, its nearly invisible flame burning the lovely patterns in the wood. First Micah directed the flame while Amelia held the propane tank. Then they trade places.

There’s something oddly hypnotic about watching the process, the flame causing the grain to emerge as if by magic. Micah said the Shou sugi ban technique renders the wood sturdy and long-lasting.

They use pine, instead of cheaper plywood, Amelia said.

Danae said the teens are charging about half of what they could, given the amount of work they do and the quality of the materials.

As the teens worked, Micah’s dad, Duane Benson, looked on. A firefighter, he said he and his wife started gardening and growing fruit trees as a way to “see what kind of beauty we could create in the heart of the city.”

“It’s a sort of spiritual thing for me,” he said. “We call it dirt therapy.”

He’s thrilled that Micah and his girlfriend have found a way to fill a similar need for people.

“To see them going for it, and making a few dollars too, is really cool,” he said. “To see that they’re doing something outside, and something so close to my heart, that’s cool, too.”

Something good from something bad

Letty Esquivel lives around the corner from the Quijanos. When she saw the garden beds on Danae’s Facebook page, she knew she had to have one.

“I told my husband, ‘This is what I want for Mother’s Day,’” she said. “I wanted the smaller bed because I’m a novice gardener. I haven’t had much luck keeping houseplants alive.”

She planted jalapenos, cucumbers, tomatoes and squash. To her delight, all the plants are thriving.

Esquivel, a preschool teacher at a private Catholic school, said the garden has helped fill a void created by the pandemic, when she can’t be with her students. It’s given her something else precious to care for and tend to.

“Every morning I go out to make sure the garden is OK, make sure there are no bugs,” she said. “It’s very therapeutic, giving me the time and space to just pray or concentrate.”

Her husband has asked for a bench for Father’s Day.

“It’s just very impressive, that these two young teens are spending their time in this way, to make these things,” Esquivel said.

Quijano’s backyard now also boasts a chicken coop, home to four young chickens Amelia is raising — Laverne and Shirley, Patty and Thelma. Amelia bought them using money from the garden beds. The chickens should start producing eggs in about four months, she said.

“We got the chickens when they were just days-old, and they’ve imprinted on Amelia,” Danae said. “They think she’s their mama, and it’s the cutest thing. Raising chickens is just a great way to occupy a teen’s time.”

At Amelia and Micah’s high school, Great Hearts Monte Vista North, part of the charter school network, the curriculum puts a strong emphasis on character building and giving back to the community, Danae said. She believes that scholastic influence is part of the reason they’re so determined to produce something of value during this downtime.

When she gets older, Amelia wants to work in cybersecurity, or maybe get a job at the zoo, she said. Micah dreams of becoming a writer, maybe creating screenplays.

It’s easy to imagine these two being successful at whatever path they choose to take.

Danae said that sometimes in the early evening, she and Frank drag lawn chairs to the driveway and put music on the loud speakers. Then they sit and watch Amelia and Micah do their work, as their 13-year-old son, Elliott, rides around on his bike.

To be sure, the virus has wreaked havoc in so many ways. But on these driveway nights, in this suspended period of time, it’s also carved out a bit happiness, through beautifully burned wood and youthful ambition realized.

“If not for the quarantine, we’d never be doing this,” Danae said wistfully.

“Before this pandemic, everybody lived such busy lives, always doing, doing, doing,” she said. “Now people are at home, together, getting back to nature, back to basics. It’s a good thing coming out of something bad.”