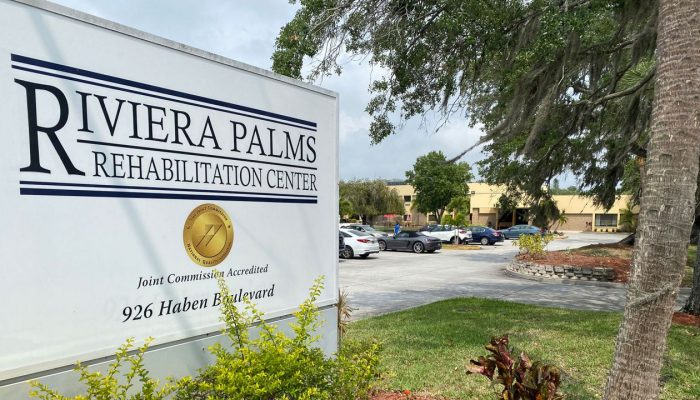 PALMETTO, Fla. — In response to exclusive Spectrum Bay News 9 reports about relatives of patients being upset that Riviera Palms Rehab Center did not disclose their COVID-19 outbreak, the Palmetto nursing home decided on Wednesday in the interest of transparency to release their positive case numbers.

Susan Kaar, V.P. of Compliance and Quality Management for Southern Healthcare Management LLC, stated that she received the figures from the Riviera Palms Rehab Administrator.

According to Kaar, the total number of positive COVID-19 cases from the center is 67, with 12 deaths. The current number of residents infected is 19, with 8 in the hospital. The number of staff members infected is 28.

“We are doing everything possible to limit COVID-19’s impact at our center,” said Kaar. “Our professional staff are doing heroic work through this crisis, and we are adhering to recommended protocols.”

Releasing the number of cases between Riviera Palms Rehab staff and residents goes above and beyond what the Florida Department of Health has required facilities to release. The state list only indicates which facilities have seen at least one positive COVID-19 case and does not provide the total number and breakdown between staff, residents and deaths.

Only after receiving public pressure from relatives and media organizations did Gov. Ron DeSantis reverse the agency’s policy on Saturday.

“We will update this information as often as possible,” she said. “Once we obtain the results of those that have been recently re-tested.”

Palmetto resident Mary Carey, 72, welcomes that information because she said her husband, Thomas Carey, 80, was a resident at Riviera Palms Rehab for two years before contracting COVID-19 on April 7. Carey said Tom was taken to Manatee Memorial Hospital where he’s currently receiving end of life care.

“I love the nursing home. I think they’ve done a wonderful job with Tom,” she said. “But I think that the first case that they had they should’ve notified everybody because you have a right to know what’s going on with your loved one.”

Kaar said they have “kept lines of communication open with families, residents, and staff during these challenging times.” Carey said that’s not what she experienced with Riviera Palms Rehab Center.

“They did not tell anyone and I called every day because they closed the facility on March 11.” she said. “I called everyday to see how Tom was doing and every day I asked and I was told there were no cases.”

Multiple sources tell us that the first case at Riviera Palms Rehab was in late March and began in unit 4. Kaar did not confirm that information.

Carey said that’s the same unit her husband was in for Lewy body dementia and has become distraught that she can’t be by Tom’s side when he passes away.

“We know it’s going to be very soon. He’s breathing very, very, shallow,” she said. “I always envisioned it that I would be there with him and helping him through this transition. It’s impossible. You have no idea how hard it is. I cry all day long and just pray​.”

Last Wednesday, we broke the news about Trish Hodges’ brother, Clyde “Bill” Sandidge, 68, who passed away at Manatee Memorial Hospital after being transferred from Riviera Palms Rehab. Hodges said the doctor told her that Sandidge’s death appeared to be caused by COVID-19.

Hodges said she wishes the nursing home would’ve alerted her too about the COVID-19 outbreak.

“Maybe somebody could have contacted me in time to say goodbye,” she said. “I hope they can be more careful and more thorough in checking patients.” ​

Sources tell us that Riviera Palms Rehab also lacks protective protection equipment. Kaar said they continue to comply with all PPE requirements and have engaged in extensive testing.

“The health and safety of our residents and staff remains the center’s top priority,” she said. “Our concern goes out to all who are suffering, and we grieve for the treasured members of the Riviera Palms Nursing & Rehab Center family who have passed during the pandemic due to COVID-19​.”