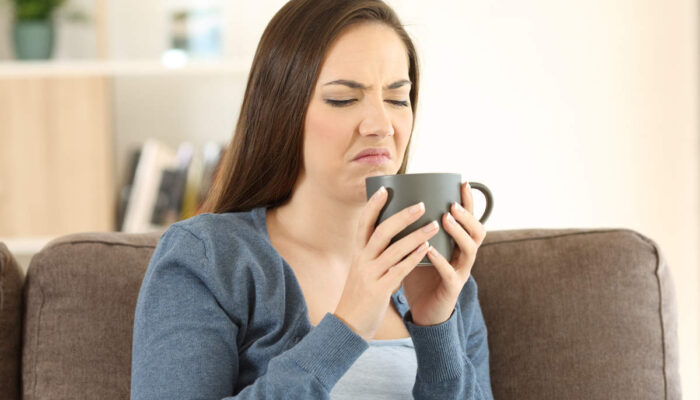 
Marcel Kuttab first sensed something was awry while brushing her teeth a year ago, several months after recovering from COVID-19.

Her toothbrush tasted dirty, so she threw it out and got a new one. Then she realized the toothpaste was at fault. Onions and garlic and meat tasted putrid, and coffee smelled like gasoline — all symptoms of the once little-known condition called parosmia that distorts the senses of smell and taste.

Kuttab, 28, who has a pharmacy doctoral degree and works for a drug company in Massachusetts, experimented to figure out what foods she could tolerate. “You can spend a lot of money in grocery stores and land up not using any of it,” she said.

The pandemic has put a spotlight on parosmia, spurring research and a host of articles in medical journals.

Membership has swelled in existing support groups, and new ones have sprouted. A fast-growing British-based Facebook parosmia group has more than 14,000 members. And parosmia-related ventures are gaining followers, from podcasts to smell training kits.

Yet a key question remains unanswered: How long does COVID-linked parosmia last? Scientists have no firm timelines. Of the five patients interviewed for this article, all of whom first developed parosmia symptoms in late spring and early summer of last year, none has fully regained normal smell and taste.

Brooke Viegut, 25, whose parosmia began in May 2020, worked for an entertainment firm in New York City before theaters were shuttered. She believes she caught COVID in March 2020 during a quick business trip to London, and, like many other patients, she lost her sense of smell. Before she regained it completely, parosmia set in, and she could not tolerate garlic, onions or meat. Even broccoli, she said at one point this year, had a chemical smell.

She still can’t stomach some foods, but she is growing more optimistic.

“A lot of fruits taste more like fruit now instead of soap,” she said. And she recently took a trip without getting seriously nauseous. “So, I’d say that’s progress.”

Optimism is warranted, said Claire Hopkins, president of the British Rhinological Society and one of the first to sound the alarm of smell loss linked to the pandemic.

“There are daily reports of recovery from long haulers in terms of parosmia improving and patients being left with a fairly good sense of smell,” Hopkins said.

Viegut worries that she may not be able to detect a gas leak or a fire. That is a real risk, as shown in January by the experience of a family in Waco, Texas, that did not detect that their house was on fire. Nearly all members had lost their sense of smell because of COVID; they escaped, but the house was destroyed.

Parosmia is one of several COVID-related problems associated with smell and taste. The partial or complete loss of smell, or anosmia, is often the first symptom of the coronavirus. The loss of taste, or ageusia, can also be a symptom.

“We would have a big conference, and one of the doctors might have one or two cases,” Rawson said.

In an early 2005 French study, the bulk of 56 cases examined were blamed on upper respiratory tract infections.

An article last June in the journal Chemical Senses, based on questionnaires, found that 7% of post-COVID patients experienced smell distortion.

A later study based on an online survey in Britain found that six months after COVID’s onset, 43% of patients who initially had reported losing their sense of smell reported experiencing parosmia, according to an article in the journal Rhinology. The onset occurred a median of 2.5 months after the patients’ loss of smell, the article reported.

Full-scale clinical trials are sorely needed to better understand what causes parosmia and other smell problems.

That matches the experience of Monica Franklin, 31, of Bergenfield, New Jersey, who was accustomed to having a keen sense of smell.

“I would be the one who could tell when the garbage had to go out,” said Franklin, a hospital occupational therapist. But she lost all sense of taste and smell in early April 2020, immediately after contracting COVID.

Two months later, she found herself with both parosmia and phantosmia, a condition that causes a person to detect phantom smells. She was constantly inhaling the smell of cigarettes at times when no one was smoking, and she was in her room alone.

Garlic and onions are the major triggers for her parosmia, a particularly taxing issue given that her boyfriend is Italian American, and she typically joins him and his family on Fridays to make pizza.

She now brings her own jar of sauce, without garlic.

For Janet Marple, 54, of Edina, Minnesota, coffee, peanut butter and feces all smell vaguely like burning rubber or give off a sickly sweetness. It’s like nothing she has ever smelled in her lifetime.

“I literally hold my breath when shampooing my hair, and laundry is a terrible experience. Even fresh-cut grass is terrible,” said Marple, a former corporate banker.

Confounded by the cavalcade of smell and taste problems, scientists around the world are paying unusual attention to the human olfactory system, the areas of the nose and brain where smells are processed.

They have focused on the olfactory epithelium, a piece of postage-stamp-sized tissue behind the bridge of the nose. The literal nerve center for detecting smells, it sends messages to the brain.

When people suffer from the common cold, mucus and other fluids may plug the nose so that smells can’t reach the nerve center. But no such blockage typically occurs in patients with COVID-caused anosmia and parosmia.

Some researchers initially speculated the virus was shutting down smells by attacking the thousands of olfactory neurons inside that nerve center. But then they found the process was more insidious.

Those neurons are held together by a scaffolding of supporting cells, called sustentacular cells, that contain a protein called the ACE2 receptor. A study published in July led by Harvard researchers found that the protein acts as a code for the virus to enter and destroy the supporting cells.

In short, parosmia appears to be caused by damage to those cells, distorting key messages from reaching the brain, according to a leading theory among some scientists.

As those cells repair themselves, they may misconnect, sending signals to the wrong relay station in the brain. That, in turn, could lead to parosmia and phantosmia.

A host of metaphors have sprung up as scientists try to convey this complex process to the public. Some describe a damaged piano, with wires missing or connected to the wrong notes, emitting a discordant sound.

Or you could imagine an old-fashioned telephone company switchboard, where operators start pushing plugs into the wrong jacks, said John Hayes, director of the Sensory Evaluation Center at Pennsylvania State University.

The National Institutes of Health issued a call in February for proposals to study the long-term side effects of COVID. Stanford’s Patel is now enrolling people in a parosmia trial, preferably those who have suffered from the disorder for six months or more, but not as long as a year.

Meanwhile, many patients are turning to support groups for guidance. Such organizations existed in Europe before COVID, but none operated in the United States.

That’s why Katie Boeteng and two other women with anosmia formed the first known U.S. group for those with smell and taste disorders in December.

Smell training can help repair the function of people suffering parosmia, according to a study.

It is called the Smell and Taste Association of North America, or STANA. The women are now working to get it nonprofit status, with guidance from the Monell center, to raise funds for studies of smell and taste disorders.

Boeteng, 31, of Plainfield, New Jersey, lost her sense of smell more than 12 years ago, from an upper respiratory infection. In 2018, she started The Smell Podcast, and has recorded more than 90 episodes, interviewing patients, advocates and scientists around the world.

The best-known group worldwide helping people with such disorders is AbScent, a charity registered in England and Wales. AbScent only had 1,500 Facebook followers when coronavirus arrived; it has more than 50,000 today.

“People are so desperate about their smell loss, because, after all, your sense of smell is also your sense of self,” said AbScent founder Chrissi Kelly, who lost her ability to smell for two years after a sinus infection in 2012. She also experienced parosmia.

She was infected with COVID in April 2020 and developed parosmia again five months later. It is lingering, she said.

Kelly and fellow British researchers have produced numerous articles exploring the impact of the coronavirus on the olfactory system.

Several other groups have emerged in Europe over the years, including Fifth Sense, also in England, founded in 2012, and groups in France and the Netherlands.

The pandemic also spawned the Global Consortium for Chemosensory Research, which is conducting surveys in 35 languages about the link between taste and smell loss and respiratory illness.

“COVID has been a magnifier of the gaps of knowledge that we have,” said group chairwoman Valentina Parma, a research assistant professor in the psychology department at Temple University in Philadelphia.

Online sites are awash with homegrown cures for parosmia and other smell disorders, although experts urge caution. At Stanford, Patel has treated patients who sprayed zinc into their nostrils, which can cause an irreversible loss of smell.

Smell training can help repair the function of people suffering parosmia, according to a study reported in November in the journal Laryngoscope. The process involves repetitive sniffing of potent scents to stimulate the sense of smell. AbScent offers a kit with four scents — rose, lemon, clove and eucalyptus — but also says people can make their own.

Franklin uses scented soaps. Kuttab has a collection of essential oils, and almost all of them smell normal, which she finds encouraging. But while she and her fiance plan to get married late this month, they’re delaying the party until she’s better.

“I don’t want to be nauseous,” she said.

For some who work in the medical field, the altered smells can be confounding. Tracy Villafuerte developed parosmia about a year ago, and just as her sense of smell started coming back, the scents of coffee and other food turned rancid.

Like some others interviewed, Villafuerte, 44, is seeing a therapist. “I want to say it and say it loud. You need to learn mechanisms about it so that you can cope every day,” she said.

Villafuerte, a certified medical assistant in Bolingbrook, Illinois, is expecting her first grandchild in early July, and she hopes she will be able to smell the girl’s new-baby scent.

“People say, ‘You work in urology, so this must be a blessing,’” she said. “I would do anything to smell urine.”

About the Author: New York Times