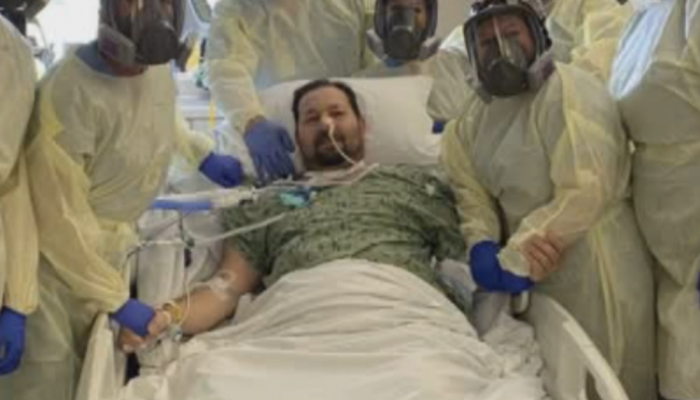 PHOENIX (3TV/CBS 5) – A Phoenix man is now one of the first coronavirus patients in the world to survive from a different kind of treatment after he was dying while using a ventilator.

Now, medical centers around the country are asking how they did it.

It was a special moment outside the hospital with happy tears, after weeks of wishing and waiting.

“I wish I could give you a hug. Without you, my husband wouldn’t be alive today. Thank you so much it means a lot to me,” Olivera Dedic said to the doctors.

Enes Dedic, 53, had come back from his mother’s funeral in Bosnia, and after days of small symptoms, he looked at his wife and knew something was wrong.

“March 15, he woke me up and told me he can’t breathe, and I need to take him to the emergency room,” Olivera said. He tested positive for COVID-19, and after being on a ventilator for two days, things weren’t looking good.

“Every phone call from the hospital, I was shaking,” she said. Her husband’s health was declining so fast at the hospital that they transferred him to the John C. Lincoln Medical Center to increase his ventilation. That’s when they tried something completely out of the box to see if they could save him.

“ECMO itself is a pretty rare service that we offer,” said Dr. Robert Riley. “When there’s nothing else left to help save the patient, this is where we go.”

Dr. Riley and Dr. Anselmo Garcia, with HonorHealth, are co-directors of the ECMO machine program. The ECMO machine removes blood from a patient’s body, pumps oxygen into it, then pumps it back into the body to help the lungs and heart. Enes was in a coma for ten days on the ECMO machine.

He was able to FaceTime Olivera, who hadn’t gotten to see her husband. “The first time when I had a faceTime with him, it was…it was crazy! It was really hard, really hard,” she said with tears in her eyes.

Not only was Enes the first COVID-19 survivor from ECMO treatment in Arizona, but he’s also one of the first in the world. As of Monday, he’s breathing on his own and is officially negative for coronavirus.

Dr. Riley and Dr. Garcia are now working on a state task force to train other ECMO centers in Arizona, as well as fielding calls from around the country on their success.

For Olivera, she’s so thankful to get to see her husband again soon.

“I promised the nurses in the ICU that I’m going to bring him because they want to see him 100 percent recovered!” she said with a big smile.