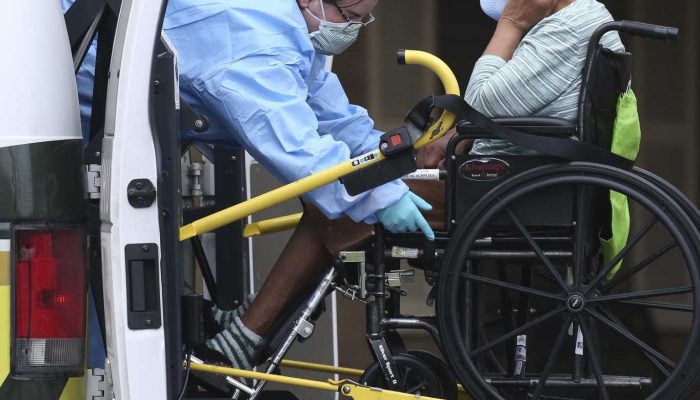 A contingency plan to consolidate all COVID-19 patients in need of skilled nursing home care at two facilities in Bexar County is unraveling.

One nursing home on the far West Side has dropped out and one on the East Side has run into opposition from two elected officials.

River City Care Center, 921 Nolan St., is at the center of the controversy after that facility and Westover Hills Rehabilitation and Healthcare were identified Friday as the two places to centralize care and possibly avoid spread of the coronavirus to more nursing homes.

The goal was to avoid a tragedy like the one unfolding at Southeast Nursing and Rehabilitation Center on the Southeast Side, where 17 residents have died from coronavirus.

But City Councilwoman Jada Andrews-Sullivan and Bexar County Commissioner Tommy Calvert are worried about the level of care at River City and its status as the only site now available for COVID-19 nursing home residents to relocate. The Westover Hills facility on Texas 151 is declining to accept patients who tested positive.

River City was one of five local nursing facilities named in a San Antonio Express-News article in November after being flagged by the Centers for Medicare and Medicaid Services for recent citations of abuse, neglect or exploitation. The story mentioned several incidents, including the choking death of a resident. An inspection report concluded the center staff failed to monitor the man’s behavior or develop safeguards.

The councilwoman is trying to arrange a community meeting via teleconference. A meeting publicized for Wednesday at Fire Station No. 1 was canceled out of concern a crowd might gather, even though Andrews-Sullivan warned social distancing measures would be required.

Calvert said River City is a “horrible site,” despite a change in ownership early this year. He was hopeful that talks about a plan to isolate infected nursing home residents would be constructive. But he also was skeptical that conditions there have improved.

“They’re willing to go before the community and talk it over,” he said Wednesday, referring to River City’s owners.

The largest managers of nursing homes in San Antonio chose Westover Hills and River City, which now is owned by Creative Solutions in Healthcare, as facilities to care for COVID-positive patients, officials said Friday. It is part of a health care strategy known as cohorting, or patient grouping and isolation.

“The judge and I believe that Westover Hills is a better facility and should be the first to be used,” Nirenberg said.

“It’s a relatively new facility. We hope that we don’t have to use either one of the two,” Wolff added.

By Monday night, the plan had unraveled. Westover Hills told the city it was pulling out of the cohorting plan, and Nirenberg attributed the decision to “intense scrutiny” from the media, public officials and the community. He noted that only a wing of Westover Hills was empty — not the whole facility, as he had earlier understood.

Nirenberg and Wolff said Tuesday they would need to re-evaluate the cohorting plan.

“What we’re trying to do is save lives, provide compassionate care and do it the best way we know how, and in some cases set the standard,” Nirenberg said.

Wolff, noting there have been no other known outbreaks at local nursing homes, said, “Let’s not fight over something that’s really not happening yet.”

The city and county are working with the private nursing home industry to contain the disease, partly by prohibiting staff from working at multiple nursing facilities, a mandate added to local emergency orders, he said.

“I don’t know whether any private-sector nursing homes will step up and do something, but quite frankly, it would be better if we had (a designated cohorting facility) closer to a hospital,” Wolff said Tuesday.

Nirenberg said he expected scrutiny to be focused on River City. The city was notified this week that two San Antonians, a husband and wife who have tested positive for COVID-19, opted to go there through an arrangement with the Texas Health and Human Services Commission because they no longer could receive home health care.

“That wasn’t part of this process. It wasn’t a transfer from one nursing home to another. It was done by the choice of those residents through the state ombudsman. So it wasn’t something we could control,” Nirenberg said.

Gary Blake, president and co-founder of Creative Solutions in Healthcare, which owns River City, said in a statement last week that the company is working with the city and state regulators to provide “a skilled nursing level of care around the clock, staffed by some of our most experienced team members,” for COVID-19 patients.

“We are proud to be part of this assertive and proactive effort to curb this pandemic which has impacted our lives in every possible way,” Blake said.

But Calvert has called the facility “shoddy” and “within arm’s length of residents on every side” and the surrounding homeless population on the near East Side.

Calvert also has exchanged a volley of letters this week with Southeast Nursing and Rehabilitation, stating in one to local and state leaders Wednesday that patients at that facility “are not being fed, given liquids, having their waste properly taken care of, and are being left to die.”

A lawyer representing Southeast fired off a response, challenging Calvert’s claims and requesting an apology.

“The accusations in your letter were based on fear and not fact. Indeed, the litany of charges you outlined are either blatantly false or represent a serious misunderstanding of state and federal regulations and guidance regarding staffing, protocols, and procedures during the COVID-19 pandemic,” Nancy A. Shellhorse, counsel for Southeast, wrote in her letter, also copied to state and local officials.

Dawn Emerick, director of Metro Health, said a team of local and state officials visited Southeast Nursing and Rehabilitation for two hours Wednesday and “reviewed all of the accusations.” They found no problems with staffing, temperature, feeding and other concerns raised in Calvert’s letter.

“There’s nothing to the accusations,” Emerick said during Wednesday’s daily city-county COVID-19 briefing.