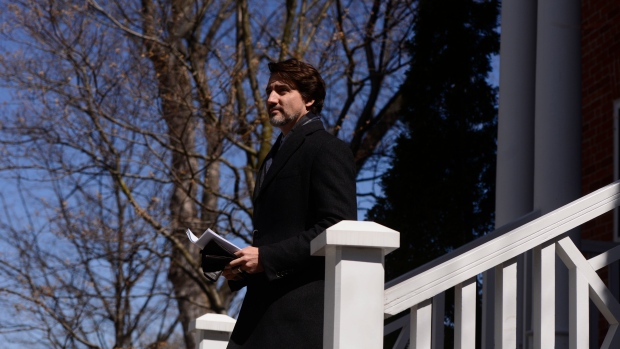 OTTAWA —
With increased testing and further understanding of the virus deemed necessary before reopening the Canadian economy, Prime Minister Justin Trudeau says the federal government is spending an additional $1.1 billion for a national medical and research strategy to address COVID-19.

During his remarks on Thursday, Trudeau said that with the effectiveness of public health measures now in place and with Canada continuing on the right track, “we need to be thinking not just about the next weeks, but about the next months,” and that will require progress on interim medical interventions to control the spread of the virus while waiting for a vaccine.

$115 million more for research into developing and producing vaccines and treatments in Canada, in an effort to offset what Trudeau expects will be a supply and demand struggle similar to that seen for personal protective equipment;

$662 million for research projects on how brain and airway cells are affected, as well as for clinical trials, including one trial that will “evaluate safety of a potential cell therapy to reduce the impacts and severity of acute respiratory distress associated with COVID-19”; and

$350 million for national testing, modelling, data-monitoring and tracking of COVID-19 in Canada.

As well, the federal government is creating a “COVID-19 immunity task force,” which Trudeau says will include a series of Canada’s top doctors and will focus on blood testing to track and understand immunity to this novel coronavirus. Among the doctors that will lead this group are Chief Public Health Officer Dr. Theresa Tam and Chief Science Advisor Dr. Mona Nemer.

“They will be looking at key questions like how many people beyond those we’ve already tested have had COVID-19, whether you are immune once you’ve had it, and if so, how long that lasts,” Trudeau said.

Through this serology testing, the prime minister is committing to testing at least one million Canadians in the next two years. He said it will also inform which public health measures are the most effective.

During the ministerial update following Trudeau’s remarks, Nemer said that one of the biggest outstanding questions of the pandemic is how many Canadians have been infected and do not know it because they did not develop any symptoms.

She said that the testing for the presence of antibodies will give the government a better idea of the rate of infection. Nemer said it will also inform health officials’ planning related to how quickly immunity to the virus develops and fades.

This new plan comes after Tam said the day before that rapid testing to detect and trace the virus’ spread, as well as those who have garnered immunity, will be essential in the interim.

In Canada, there are more than 40,000 confirmed COVID-19 cases and the country has just surpassed 2,000 deaths.

Through this serology testing, the prime minister is committing to testing at least one million Canadians in the next two years. He said it will also inform which public health measures are the most effective.

This new plan comes after Tam said the day before that rapid testing to detect and trace the virus’ spread, as well as those who have garnered immunity, will be essential in the interim.

Right now, Tam said, Canada needs to triple the number of COVID-19 tests being conducted daily in order to reach her desired target of 60,000 tests a day.

Tam said she believes that the known lab-confirmed cases are likely the “tip of the iceberg” and serology testing to detect immunity will reveal the prevalence of infection, and also inform decisions about who may be able to return to work.

“That’s definitely one of the key objectives. Our lab is working hard at validating the serologic tests that are being presented. Internationally we’re aware that some of them don’t work so we want to make sure the ones that we have actually are effective and can detect the antibody response in the Canadian population,” Tam said.

Trudeau doubled down on the importance of enhanced testing capacity on Thursday, saying increased testing for the virus is “key.”

Asked if Canadians will have to wait to do things like hug their friends and family that they don’t live with, Trudeau said the decisions on how those aspects of quality of life and support can be conducted in the interim will rely on expert medical advice.

Further to this, Health Minister Patty Hajdu said that the research being funded through this new envelope will help create a clearer picture for possible second waves and to make clearer what public health restrictions need to remain in place.

“These are all important steps that we’re taking to help us fully understand the virus and how Canadians can continue to live with the virus in the safest and healthiest ways possible. The more that we understand it, the sooner that we will reach the new normal,” Hajdu said.

Across the country premiers are beginning to lay out their plans for reopening, with some provinces like Saskatchewan and Prince Edward Island—where the virus’ spread appears to be minimal in comparison to hot spots like Ontario and Quebec—readying to loosen some restrictions in early May.

Trudeau said that lessons will be learned from regions of Canada that ease reigns at different times.

“In the coming months we will be able to loosen a number of the restrictions and rules that we have right now… Different provinces are in very different postures related to COVID-19 and will be taking decisions that are appropriate for them,” he said.

“Experts have said that Canada needs to triple its daily testing before loosening restrictions, so where is the plan to do that? What is the government doing to improve testing and tracing?” he asked, adding that he thinks Trudeau should present Canadians with a full plan, by next week, on how the federal government intends to get the economy back up and running.

RESEARCH, INNOVATIONS IN THE WORKS

In an initial COVID-19 aid announcement made mid-March, the federal government earmarked $275 million for research by 47 teams across the country. This came in addition to ongoing increases to lab testing capacity and Canada-wide health surveillance.

The government has also put a call out to Canadian life-science companies, universities, colleges and polytechnic institutions to play a role as well, suggesting in a similar way as done with the mobilization of Canadian manufacturers, that an all hands on deck approach was required to find pandemic solutions.

Earlier this week, offering an update on the various research initiatives underway, Trudeau said that more than 500 firms have offered ideas for innovations to help Canada through the pandemic.

The government says it has shifted the country’s entire industrial policy to focus on the COVID-19 fight. This has included reprioritizing existing innovation and research programs and working on agreements with industry to fast-track the creation and regulatory approvals for getting diagnostic testing products and other disease-tracking technology to market.