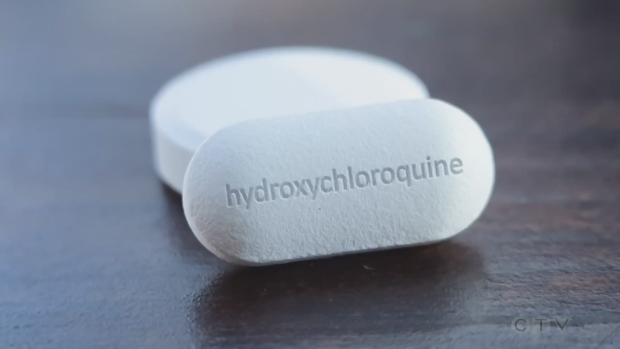 
WINNIPEG —
U.S. President Donald Trump has been touting it for a while now, and this week, he said he is taking the drug hydroxychloroquine to prevent a COVID-19 infection.

“I think it’s worth it as a line of defence, and I’ll take it a little while longer,” Trump said in a press conference on Tuesday.

But Lauren MacKenzie, assistant professor of internal medicine at the University of Manitoba, told CTV News the question remains if the drug has any effect on COVID-19.

“We really don’t have an answer to this question,” she said. “We don’t know if it works or if it doesn’t work and that’s what we’re trying to answer with the trial.”

MacKenzie is also the Canadian principal investigator for a clinical trial looking into the anti-malaria drug. The study is looking to see if hydroxychloroquine is effective in preventing front-line COVID-19 healthcare workers from getting infected.

The study needs 3,500 participants to take either hydroxychloroquine or a placebo for 12 weeks.

MacKenzie said so far a study site in the U.S. has enrolled 1,500 people. In Manitoba, about a handful of people have signed up.

“We don’t know why people are not participating,” she said. “Certainly there is a lower number of cases in Manitoba at the time and that can certainly impact the trial.”

MacKenzie wonders if the political attention hydroxychloroquine gets is affecting interest.

“We’re trying to answer a question that we don’t have an answer to yet,” she said. ”And so, certainly it could make answering that question more difficult when people have some preconceived ideas about whether the drug works or it doesn’t work.”

CUPE 204 represents 14,000 healthcare workers, including personal care aides in long-term care homes. Those working in a facility with a current case or a past case are one group eligible to take part in this trial.

“They said I wouldn’t do anything that Donald Trump would do,” she said.

Boissonneault added some people have said they don’t know enough about the drug to take part in a clinical trial.

“We need the research to know whether these medications work,” she said. “But at the same time, who wants to be that guinea pig?”

CTV News spoke anonymously with a healthcare worker who has been redeployed to screen people coming into healthcare facilities. They said before taking part in a clinical trial for a drug with known side-effects, they would consult with their doctor first, and wouldn’t let a politician affect their decision.

On Tuesday, Dr. Brent Roussin, Manitoba’s chief provincial public health officer, said the only reason to take hydroxychloroquine for COVID-19 is if it’s a part of a clinical trial.

MacKenzie said her trial has safeguards in place to exclude people who may be at risk for certain side effects.

“People who might have an underlying arrhythmia or people who may be on medications that could have an impact in terms of interactions with hydroxychloroquine,” she said.

Healthcare workers who may be interested are encouraged to visit the trial’s website or email the researchers with any questions.

“We want to do everything we can to answer people’s questions so that those people who might be eligible to participate, can participate,” MacKenzie said.

The trial is expecting a site to open in Quebec this week.

About the Author: Michelle Gerwing