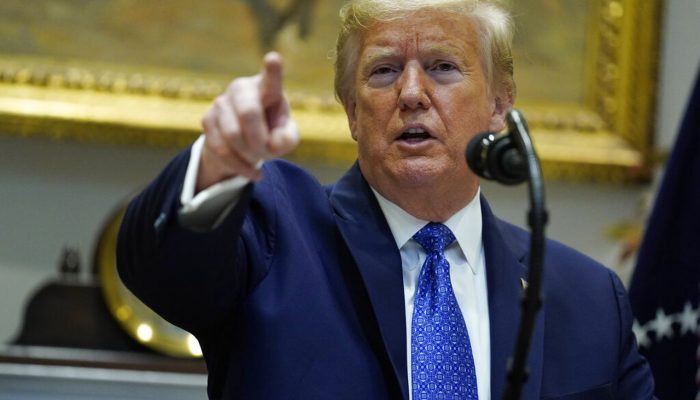 
Despite lacking more than anecdotal evidence that coronavirus could be effectively prevented or treated with a well-known malaria drug, President Donald Trump on Tuesday defended taking hydroxychloroquine, a practice that even his own administration warned Americans not to do outside a clinical or hospital setting.

The president, in a cabinet meeting at the White House Tuesday, was asked about the Food and Drug Administration’s explicit April 24 caution “against use of hydroxychloroquine or chloroquine for COVID-19 outside of the hospital setting or a clinical trial due to risk of heart rhythm problems.” The FDA at the time warned of risks of serious heart-related adverse effects and even death.

The question came a day after Trump announced he’d been taking the drug as a precaution for about a week and half because he’d “heard a lot of good stories” about it. But Trump dismissed the question entirely, saying, “No, that’s not what I was told. No,” before discussing a study unrelated to the FDA’s warning.

The president referenced a study in which researchers evaluated 368 male veterans with COVID-19 at all Veterans Health Administration medical centers in the country. The study, which was not peer reviewed, showed about 28% of those who were given hydroxychloroquine, on top of normal care, died. That rate was more than double the 11% of veterans who received solely normal care and died.

The study “found no evidence that use of hydroxychloroquine, either with or without azithromycin, reduced the risk of mechanical ventilation in patients hospitalized with COVID-19.”

The president, without providing evidence, described the study as “false.”

Robert Wilkie, head of Veterans Affairs, emphasized that the study was not a VA effort and noted that the state of New York had previously requested shipments of the drug. Gov. Andrew Cuomo had asked for a clinical trial of the drug, and said in early April that “there has been anecdotal evidence that it’s promising.”

Trump has repeatedly touted the drug throughout the pandemic, telling Americans, “What do you have to lose?”

His optimism has been challenged by some on his own public health team, including Dr. Anthony Fauci, who frequently warned that it was too early to tell the drug’s effectiveness without further study. Research in Europe and China that showed positive signs for COVID-19 patients did not include control groups, with Fauci asserting that there was merely “anecdotal evidence” hydroxychloroquine made any positive impact.

“One thing that is true, whether you like it or not, it’s been around for 70 years,” Trump said of the drug, which has long proven effective in treating malaria, lupus and arthritis.

Trump on Tuesday claimed “it doesn’t harm you” and said he didn’t feel any different since he started taking it as “an extra line of defense.” He highly recommend people discuss the drug with their doctors and said it had “gotten tremendous reviews from some people including many many doctors all over the world.”

In its April 24 advisory, the FDA’s public health professionals did not give hydroxychloroquine “tremendous reviews” in relation to COVID-19.

The FDA urged Americans not to buy the medicines from online pharmacies without a prescription from a health care professional, and noted that “serious poisoning and death have been reported after mistaken use of a chloroquine product not intended to be taken by humans.”

“Be aware that there are no proven treatments for COVID-19 and no vaccine,” the FDA said. “If you are receiving hydroxychloroquine or chloroquine for COVID-19 and experience irregular heartbeats, dizziness, or fainting, seek medical attention right away by calling 911.”

Fauci, head of the National Institute of Allergy and Infectious Diseases, announced late last month that the drug remdesivir has proven itself to be promising in treating patients with COVID-19.

The NIAID study is one of many testing the effectiveness of remdesivir. This particular trial was conducted internationally, and according to Fauci, was the first high-powered, placebo-controlled study of the drug. The results showed hospitalizations were cut from 15 to 11 days, and the death rate was cut from 11 percent to 8 percent.

Brigham and Women’s Hospital in Boston is participating in two separate remdesivir studies. Dr. Dan Kuritzkes, chief of the hospital’s Division of Infectious Diseases, previously noted that positive results do not mean the drug is a cure.