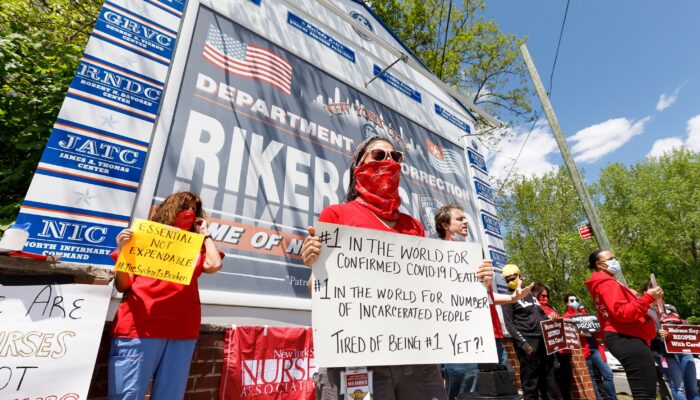 
“It’s a fundamental tenet of public health to try and stop epidemics at their source,” he added.

One approach, under consideration by the National Commission on Covid-19 and Criminal Justice, would be to prioritize vaccination only for prisoners and detainees whose medical conditions or advanced age put them at great risk should they become ill.

The United States holds some 2.3 million individuals in prisons, jails and other detention centers, incarcerating more people per capita than any other nation. That includes nearly 500,000 people who have not been convicted of a crime and are awaiting trials, according to the Prison Policy Initiative. (Some jails have taken steps to reduce overcrowding since the pandemic started.)

The Road to a Coronavirus VaccineWords to Know About Vaccines

Confused by the all technical terms used to describe how vaccines work and are investigated? Let us help:

Adverse event: A health problem that crops up in volunteers in a clinical trial of a vaccine or a drug. An adverse event isn’t always caused by the treatment tested in the trial.Antibody: A protein produced by the immune system that can attach to a pathogen such as the coronavirus and stop it from infecting cells.Approval, licensure and emergency use authorization: Drugs, vaccines and medical devices cannot be sold in the United States without gaining approval from the Food and Drug Administration, also known as licensure. After a company submits the results of  clinical trials to the F.D.A. for consideration, the agency decides whether the product is safe and effective, a process that generally takes many months. If the country is facing an emergency — like a pandemic — a company may apply instead for an emergency use authorization, which can be granted considerably faster.Background rate: How often a health problem, known as an adverse event, arises in the general population. To determine if a vaccine or a drug is safe, researchers compare the rate of adverse events in a trial to the background rate.Efficacy: A measurement of how effective a treatment was in a clinical trial. To test a coronavirus vaccine, for instance, researchers compare how many people in the vaccinated and placebo groups get Covid-19. The real-world effectiveness of a vaccine may turn out to be different from its efficacy in a trial.Phase 1, 2, and 3 trials: Clinical trials typically take place in three stages. Phase 1 trials usually involve a few dozen people and are designed to observe whether a vaccine or drug is safe. Phase 2 trials, involving hundreds of people, allow researchers to try out different doses and gather more measurements about the vaccine’s effects on the immune system. Phase 3 trials, involving thousands or tens of thousands of volunteers, determine the safety and efficacy of the vaccine or drug by waiting to see how many people are protected from the disease it’s designed to fight.Placebo: A substance that has no therapeutic effect, often used in a clinical trial. To see if a vaccine can prevent Covid-19, for example, researchers may inject the vaccine into half of their volunteers, while the other half get a placebo of salt water. They can then compare how many people in each group get infected.Post-market surveillance: The monitoring that takes place after a vaccine or drug has been approved and is regularly prescribed by doctors. This surveillance typically confirms that the treatment is safe. On rare occasions, it detects side effects in certain groups of people that were missed during clinical trials.Preclinical research: Studies that take place before the start of a clinical trial, typically involving experiments where a treatment is tested on cells or in animals.Viral vector vaccines: A type of vaccine that uses a harmless virus to chauffeur immune-system-stimulating ingredients into the human body. Viral vectors are used in several experimental Covid-19 vaccines, including those developed by AstraZeneca and Johnson & Johnson. Both of these companies are using a common cold virus called an adenovirus as their vector. The adenovirus carries coronavirus genes.Trial protocol: A series of procedures to be carried out during a clinical trial.

The figure also includes some 44,000 youngsters who are held in juvenile facilities and an estimated 42,000 in immigration detention centers.

So far, at least 200,000 inmates have already been infected with Covid-19, and at least 1,450 inmates and correctional officers have died from the virus, according to a database maintained by The New York Times.

Those numbers most likely underestimate the magnitude of the problem, because reporting requirements are spotty and vary from state to state, said Dr. Tom Inglesby, an infectious disease expert at the Johns Hopkins Bloomberg School of Public Health and another co-author of the vaccine allocation report.

About the Author: By Roni Caryn Rabin