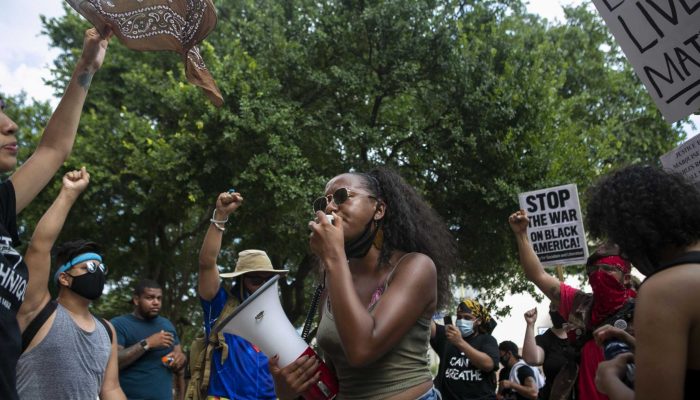 Almost 100 protesters gathered at the Bexar County Courthouse on Tuesday, the day after District Attorney Joe Gonzales said there is no new evidence to warrant reopening investigations of the killings of three black men by San Antonio police officers.

As some held signs urging “Defund the Police” and “Smash Cop Unions,” demonstrators voiced their fervor with chants of “Black Lives Matter” and “Police are violent — we will not be silent.”

The group later marched downtown and made its way to Travis Park with some demonstrators holding their fists in the air.

It was the 11th consecutive day of protests in San Antonio since the death of George Floyd, a black man killed in Minneapolis police custody two weeks ago, and the day of his funeral in Houston. An officer who kneeled on Floyd’s neck as bystanders pleaded for his life and took video has been charged with murder.

Tuesday’s protest here sought to make Gonzales the focus for declining to reopen the cases of Marquise Jones, Charles “Chop Chop” Roundtree Jr. and Antronie Scott, all killed by San Antonio police officers in separate incidents in the past six years. Kimiya Factory, a local community activist, said she helped organize the gathering to demand justice for the three men’s families.

Her remarks exposed tensions with other movement organizers about the best way to address issues of police brutality, police misconduct and systemic racism. At several points, Factory called them out, asking why they invited police officers to recent protests and accusing them of infiltrating the Black Lives Matter movement and working with police.

Gonzales said Tuesday he supports the community’s right to protest, though discussion of the SAPD killings on social media included a threat to his own life, causing him to increase his security detail.

“I’m on their side,” Gonzales said. “I am a reformer, and I am doing everything I can to run this office in a just order.”

Gonzales said he has examined the Roundtree, Scott and Jones cases and thinks each was handled properly, including two from before he took office. There is no new information that leads him to believe that reopening and refiling those cases would lead to a different outcome, he said.

On ExpressNews.com: Texas to require all police officers to receive implicit bias training

“These three other cases are very different” from Floyd’s death, Gonzales said. “Officers had to make a split-second decision when they fired, and in a situation where they believed they had to use deadly force.”

Iliana Arizpe, 35, attending her fourth protest, said the loss of a human life moved her to join the demonstration and to support reopening the cases.

She stood on the curb of Nueva Street watching as protesters shouted they would not be silenced.

“I feel there are a lot of good cops,” Arizpe said. “But a lot need psychological training to use a weapon.”

Jackson Mosqueda, 20, sat away from the crowd, holding a flag bearing the words “Disarm, Defund and Dismantle.” He and his brother Griffin, 18, said Tuesday’s protest was the seventh they’ve attended.

The call for change and reform keeps them coming back, they said. Jackson Mosqueda said the system has never worked.

“You have to abolish it and start over,” he said. “I cannot continue to live in this system that does not value me as a person.”

Protesters are calling for the police department budget to be reallocated for better training of officers “and evaluating their mental health,” said activist Roger Mortensen, 28.

“We should be able to elect these officers into their positions. We shouldn’t be out here hiring these officers like it’s a fast food place,” he said.

Roundtree, 18, was unarmed when he was shot and killed by an officer at a West Side home early on Oct. 17, 2018. A police report said officers were investigating an assault.

A pending lawsuit filed by Roundtree’s family claimed the young man and two friends weren’t breaking any laws when an SAPD officer showed up at the house without any warning and without a “no knock” warrant. The officer opened the door, shined a bright light and opened fire, the lawsuit said. Roundtree was fatally shot in the chest as he sat on a couch.

The officer was not charged.

Scott, 36, was killed Feb. 4, 2016 when he stepped out of his car holding a cell phone as San Antonio police were attempting to arrest him on two felony warrants. An officer shot Scott because he thought Scott was holding a gun. No charges resulted.

Jones, 23, was killed in February 2014 by an SAPD officer working an off-duty job as a security guard at a Northeast Side restaurant. Jones’ car had rear-ended another car in the drive-through, and the officer said he approached the vehicle.

In testimony related to an unsuccessful lawsuit, the officer said Jones jumped out of the passenger side of the car and began running, at one point looking over his shoulder and pointing a gun. But Jones’ family and a few witnesses said he didn’t have a gun. The officer fired eight shots, one of which killed Jones.

A Bexar County grand jury declined to return indictments in that case.

After marching past Travis Park, the Alamo and along the Riverwalk, Tuesday’s crowd of protesters returned to the courthouse, where they lined a fence and faced a phalanx of law enforcement officers before breaking up for the evening.

The chants for justice continued as demonstrators shouted at the unmoving police officers.

“Our streets!” the crowd answered.

Vincent T. Davis is a reporter in the Greater San Antonio and Bexar County area. To read more from Vincent, become a subscriber. vtdavis@express-news.net | Twitter: @vincentdavis