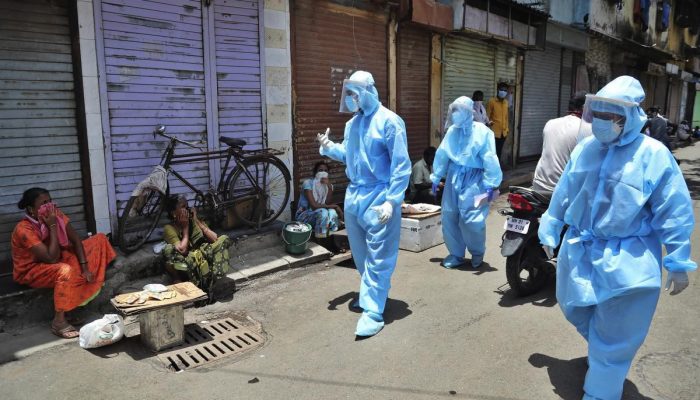 The latest coronavirus news from Canada and around the world Friday (this file will be updated throughout the day). Web links to longer stories if available.

3:18 p.m.: Members of the Canadian Armed Forces working inside long-term-care homes could find themselves testifying about the state of those facilities in relation to lawsuits against the institutions.

The unusual scenario follows the deployment of hundreds of service members in April and May to more than two dozen nursing homes in Ontario and Quebec hit hard by COVID-19. Damning military reports later said the troops found cases of abuse and negligence in the homes, including bug infestations, aggressive feeding of residents that caused choking, and residents left crying for help for hours.

Stephen Birman and Lucy Jackson of Toronto law firm Thomson Rogers are leading a proposed $20-million class-action lawsuit brought against the Altamonte Care Community on behalf of the Toronto home’s residents and their families.

They say the troops’ firsthand observations could be critical in proving their clients’ claims against the home and that they plan to try to collect service members’ statements.

The Ministry of Education says more than 157,000 kindergarten to Grade 12 students — or nearly 30 per cent of all students in those grades — went back to school for the first week back during the COVID-19 pandemic.

Starting June 1, kindergarten to Grade 5 students could attend school part-time. Those in grades 6 to 12 can attend for the equivalent of one school day weekly.

Children of essential-service workers and those needing additional supports can attend full time.

Education Minister Rob Fleming says in a statement that the province is fortunate to be able to welcome students back to schools under public health expert guidance that makes it safe to do so.

The province’s health authorities say 225 new cases were reported in the past 24 hours, bringing the provincial tally to 52,849.

The additional COVID-19 deaths bring the province’s total to 4,978.

Officials say the number of hospitalizations dipped by nine to 972, while there were 128 people in intensive care — one fewer than the previous day.

The province has reported 18,714 people have recovered from the virus.

Premier Francois Legault will hold his COVID-19 briefing in Montreal on Monday alongside the province’s health minister and director of public health.

1:20 p.m.: Members of the Canadian Armed Forces working inside long-term care homes could find themselves testifying about the state of those facilities in relation to lawsuits against the institutions.

The unusual scenario follows the deployment of hundreds of service members in April and May to more than two-dozen nursing homes in Ontario and Quebec hit hard by COVID-19.

Damning military reports later said the troops found cases of abuse and negligence in the homes, including bug infestations, aggressive feeding of residents that caused choking, bleeding infections and residents left crying for help for hours.

Stephen Birman and Lucy Jackson of Toronto law firm Thomson Rogers are leading a proposed $20-million class-action lawsuit brought against the Altamonte Care Community on behalf of the Toronto home’s residents and their families.

They say the troops’ firsthand observations could be critical in proving their clients’ claims against the home and that they plan to try to collect service members’ statements during the course of their lawsuit.

The Department of National Defence says military personnel have an obligation to report their observations about any mission and acknowledges they can be called upon as witnesses in legal proceedings.

12:25 p.m.: Dorval organized two movie nights this weekend in an empty parking lot across from a shopping mall.

With many activities still closed across Quebec due to the COVID-19 pandemic, Dorval is one of a few places that have turned to drive-ins as a way to give residents something fun to do while following social-distancing rules.

Quebec has been hit hard by the COVID-19 pandemic, and Dorval was not spared. But as new cases subsided in Quebec, the province last month began gradually allowing businesses to reopen and certain activities to resume. Drive-ins could reopen as of May 29, the government said, as long as social distancing rules were followed.

Michael Smith, a partner at the Bennett Jones law firm in Toronto, says it has been tracking all proposed class-action claims related to the pandemic.

From the end of March to June 1, the firm recorded 19 such lawsuits across Canada, including eight against long-term care facilities.

“What you find with COVID is the breadth of the sectors it touches,” Smith said in an interview.

“You’re seeing many industry sectors affected simultaneously. We will have COVID-related cases in the courts for many years.”

Residents at care homes have been particularly infected with the novel coronavirus.

8:20 a.m.: Coronavirus-related deaths have surpassed 400,000 worldwide, according to the Johns Hopkins University tracker.

7:53 a.m.: Health Canada says some hand sanitizers are being recalled because they contain industrial-grade ethanol.

The agency says industrial-grade ethanol contains chemicals that may not be approved for use in hand sanitizers.

It warns that frequent use of these products can result in dry skin, causing irritation or cracking.

Consumers are advised to stop using the products immediately and return them to their local pharmacy for proper disposal.

Health Canada says it’s monitoring the effectiveness of the recalls.

7:30 a.m.: Senior Chinese officials, releasing a lengthy report on the nation’s response to the coronavirus pandemic, defended their government’s actions and said that China provided information in a timely and transparent manner.

An Associated Press investigation found that government labs sat on releasing the genetic map of the virus for more than a week in January, delaying its identification in a third country and the sharing of information needed to develop tests, drugs and a vaccine.

7:30 a.m.: They haul food, fuel and other essential supplies along sometimes dangerous roads during tough economic times. But Africa’s long-distance truckers say they are increasingly being accused of carrying something else: the coronavirus.

While hundreds of truckers have tested positive for the virus in recent weeks, the drivers say they are being stigmatized and treated like criminals, being detained by governments and slowing cargo traffic to a crawl.

That has created a challenge for governments in much of sub-Saharan Africa, where many borders remain closed by the pandemic, on how to strike a balance between contagion and commerce. Countries are struggling to reach common ground.

7 a.m.: India reported 9,971 new coronavirus cases on Sunday in another biggest single-day spike, a day before it prepares to reopen shopping malls, hotels and religious places after a 10-week lockdown.

India has now surpassed Spain as the fifth hardest-hit country, with 246,628 confirmed cases of the coronavirus, including 6,929 deaths.

New Delhi, Mumbai and Ahmedabad are among India’s worst-hit cities. Six of the country’s 28 states account for 73 per cent of the total cases.

India has already partially restored train services and domestic flights and allowed shops and manufacturing to reopen. E-commerce companies have started to deliver goods, including those considered nonessential, to places outside containment zones.

6 a.m.: China on Sunday reported its first non-imported case of the new coronavirus in two weeks, a 37-year-old woman who tested positive after arriving on the island of Hainan off the southern coast.

The National Health Commission said there were also five imported cases in the previous 24-hour period, bringing the nation’s total case count to 83,036.

The woman came from Hubei province, the epicentre of the outbreak in China, and had tested negative two days before leaving for Hainan. China has largely stopped the spread of the virus at home, though it continues to have occasional localized outbreaks.

It is on guard against imported cases as it begins to ease restrictions on flights and people arriving from abroad. China’s official death toll from the virus is 4,634.

6 a.m.: South Korea reported 57 new cases of the coronavirus on Sunday, its second straight day with over 50 new infections. The new cases took the country’s total to 11,776, including 273 deaths. South Korea’s caseload peaked in late February and early March when it recorded hundreds of new cases each day.

But the outbreak has significantly eased amid aggressive tracing, testing and treatment, prompting authorities to loosen strict social distancing rules. The new cases in recent weeks have been linked to nightclubs, an e-commerce warehouse, church gatherings and door-to-door sellers in the Seoul metropolitan area.

6 a.m.: Malaysians will be allowed to travel interstate, get their hair cut at salons and visit street markets beginning Wednesday, when more coronavirus lockdown restrictions are lifted.

But he said certain prohibitions will remain as the country enters a “recovery” phase until the end of August.Malaysia has confirmed just over 8,000 cases of the virus, including 117 deaths.

6 a.m.: Australian Health Minister Greg Hunt said he hopes the Black Lives Matter rallies across the country on Saturday that broke COVID-19 social distancing rules will not lead to a new wave of infections. More than 20,000 people marched in Sydney and crowds rallied in Melbourne, Brisbane, Adelaide and some regional cities and towns despite public health warnings.

“We don’t know whether people will be infected,” Hunt told Australian Broadcasting Corp. radio. “But if there is someone who is infectious in the midst of a crowd like that, that can have a catastrophic impact.” Australia has had over 7,250 confirmed COVID-19 cases with 102 deaths.

Click here for coverage of coronavirus news from Saturday.

About the Author: thestar.com