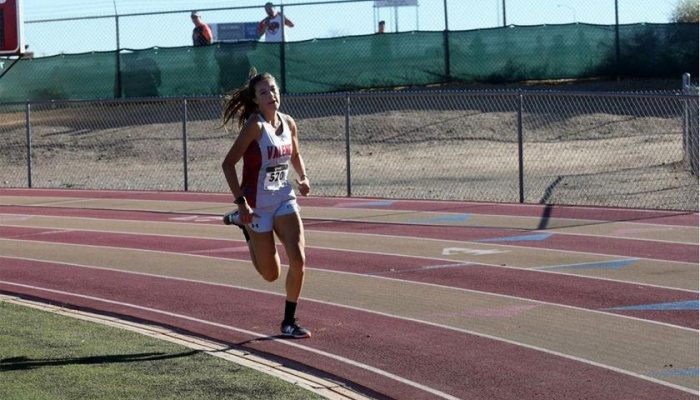 
Raquel Chavez, a senior at Valencia High School, runs during the 2019 cross country season. She will run for West Texas in the fall.

Valencia star Raquel Chavez had big plans for this spring’s track season. Her big plans were, unfortunately, derailed by the cancellation of the spring season due to COVID-19.

Luckily, the end of her time running at Valencia doesn’t mean the end to her competitive athletic career, as Chavez, who was voted the News-Bulletin’s female athlete of the year, will run at West Texas A&M next fall.

She fell in love with the university after being invited by the coaching staff to a camp the program hosted.

“While I was there I just fell in love with it, I love the enviorment there,” Chavez said.

West Texas wasn’t Chavez’ only suitor, she estimates she had about 10 different options to choose from in the recruiting phase, including Northern Arizona and a plethora of colleges back east.

However, she knew quickly that West Texas was the right choice for her, and signed in a ceremony at VHS in November.

Chavez picked WT A&M in large part because of the success the program has had throughout the years. This past year, the Lady Buffs were ranked ninth in the regional rankings at the division two level. West Texas competes in the Lonestar Conference, along with both Eastern and Western New Mexico.

Chavez ran both cross country and track for VHS, and will do the same for the Lady Buffs.

West Texas is led by Matt Stewart, who has been in charge of the program for three years.

In her time at Valencia, Chavez enjoyed plenty of success and set a number of records.

Her favorite memory from her four years running for the Jaguars was her sophomore season when she set a school record and finished third in the state with her 4×200 relay team at the track and field state championships in Albuquerque with a time of 1:47.38.

Losing what was going to be her final track and field season to the pandemic was difficult on Chavez, who was expecting to challenge for several records.

“It felt like a slap in the face to have the season canceled, to be honest,” Chavez said. “I was glad we were able to at least get one meet in.”

In order to stay sharp, Chavez has been training as though she was still practicing normally.

“I set a schedule for myself everyday to make it as close to a school day as I can and try and keep some sense of normalcy. I have alarms set when its time for me to switch subjects.”

She is also running twice a day by herself in order to stay in shape and set herself up to compete in the fall when she gets to college.

All of this is her way of making sure she’s in the best position possible to compete when she gets to campus in the fall.

Her goals for her freshman year include running as part of the Lady Buffs top group, as well as winning an end-of-year award that is given to the top new freshman.

“If I could win that, it would show that all of my hard work truly got me here, and that we were able to get through COVID-19,” Chavez said. “It would mean a lot.”

After she graduates from college and finishes her athletic career, Chavez wants to earn her PHD and work with her uncle as a physical therapist.