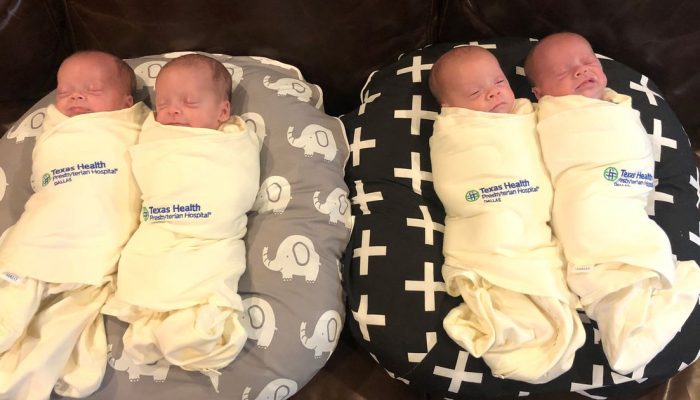 
While people around the world worry about the isolation of the coronavirus pandemic, Jenny Marr has no fears of being lonely.

If anything, she may be feeling a little outnumbered by her new baby boys Hudson and Harrison — and Henry and Hardy.

Some experts say the chances of identical quadruplets are 11 million to 1; others put them at 15 million. But whatever the odds, the new mom and her husband, Chris, beat them on their first trip to the delivery room.

The boys were born at 28 weeks on March 15, the day before Dallas County’s stay-at-home pandemic orders were issued. Although pregnancies for multiple births are typically shorter than the average 40 weeks, Jenny Marr hadn’t expected her sons to arrive for 33 weeks.

Identical quadruplets (from bottom to top) Hudson, Harrison, Hardy, and Henry Marr pose for a portrait at their home in Dallas, on Wednesday, May 20, 2020. The four identical boys were born on March 15, 2020 right before social distancing orders were issued. (Vernon Bryant/The Dallas Morning News)(Vernon Bryant / Staff Photographer)

A team of 24 doctors and nurses helped with the C-section delivery at Texas Health Presbyterian Hospital Dallas.

The brothers spent six weeks in the neonatal intensive-care unit and nearly two weeks in special care before they were discharged one by one. Henry, the last baby to be discharged, went home May 12. They weighed 1 to 3 pounds at birth and are now all 5 to 6 pounds.

“It is so fantastic to have them home,” the new Dallas mom said. “It feels good to have a pattern and feel a little bit more normal.”

At their first OB-GYN appointment late last year, the Marrs thought they were having triplets. They were surprised a week later when they heard a fourth heart beating.

The quadruplets were not conceived through in vitro fertilization, which increases the chances of multiple births.

“This situation is so incredibly rare that there are only about 72 documented cases of spontaneous, identical quadruplets ever,” Texas Health Dr. Brian Rinehart said in a news release from the hospital.

It’s even more unusual to have four identical boys, and the couple has no history of multiple births on either side of their family.

Marr said she kept a positive attitude as the births approached, even with the challenges of having four babies during a pandemic. After the boys were born, she felt the hospital was the safest place for them.

“Our nurses were social distancing from their families,” she said. “They weren’t seeing anybody because they put our babies first.”

The hospital implemented a no-visitor policy March 23. Both parents spent up to 10 hours a day in the hospital as the boys gained enough weight to make the trip home.

Like all hospital visitors, the couple were required to be screened and wear masks.

“I just didn’t feel like it was an unsafe place to be, and I don’t feel like people should feel like that,” Marr said. “You go to the hospital to be taken care of, not to go get sick.”

The boys’ first and middle names are Hudson Perry, Henry William, Harrison Foy and Hardy Smith. The fact that the names all start with the letter ‘H’ happened by accident, she said said, but each name was one that the couple likes or has a specific meaning behind it.

Perry is her grandmother’s name, and she said she promised her grandmother she would name her daughter after her, thinking that Perry could only be a girl’s name.

“When we found out we were having four boys, I realized I was never going to have another child,” Marr said. “And so we gave him Perry as a middle name for my grandmother.”

She said she’s getting help from nannies and relatives so each boy gets enough attention. Thanks to the support, she’s managing to get five to six hours of sleep a night.

Marr, who helps manage a dental practice, and her husband, who is self-employed in real estate for large institutional investment groups, are also receiving financial help from family friends.

So far, she said, the boys have proved to be good sleepers, and they generally enjoy each other’s company. She admits she does mix up the boys every once in a while, but she’s figuring out each of their personalities and characteristics as they’re growing.

“Henry has like a little tiny hemangioma — it’s like a little blood vessel — he has one on his belly,” Marr said. “I unzipped his little jammies and saw it was him. So I tickled his belly, and he just looked at me and started smiling and laughing and that was the first time that he’d done that.”

She said she’s waiting on a vaccine so the boys can experience some kind of normalcy during the pandemic.

“I’m looking forward to just everybody coming and seeing how awesome they are, who they are and being able to hold and snuggle them,” she said.