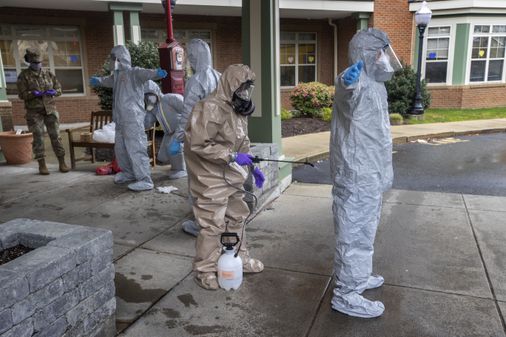 
Details on infections and deaths within the nation’s nursing homes are spotty — the foundation says only 30 states are publicly reporting data about fatalities in long-term care facilities, angering families and advocates, and making the full impact of the virus’s toll difficult to gauge.

But one thing is for sure: long-term care facilities in Massachusetts have borne the brunt of the deadly disease like few other places, a worrisome trend for the 41,000 people living in nursing and rest homes here.

“If you have someone in the nursing home, you are just holding your breath,” said Elizabeth Dugan, associate professor of gerontology at the University of Massachusetts Boston.

Each day brings new, distressing reports of infection and deaths linked to the disease, which preys on the elderly, frail, and sick. There have been 71 deaths at the Holyoke Soldiers’ Home, 46 at a nursing home in Lawrence, and 49 at a facility in Belmont.

At least 67 percent of the state’s 476 long-term care facilities have reported one case of infection, according to state data.

Since April 17, coronavirus deaths in long-term care facilities have represented at least half of all deaths in the state and the trend appears to show no signs of abating.

“It is likely to be 50 percent and are we OK with that?” Dugan said. “And what does that we say about us if we are OK about that?”

When the virus breached nursing homes, a cascade of problems followed. Countless staff stayed home from work because of illness or fear and facilities reported inadequate supplies of personal protective equipment. Meanwhile, a dearth of testing for patients and workers made it difficult to gauge the presence of the invisible virus.

Dugan, of UMass, said the United States was slow to act on early data in China and later Italy, where the aging population was devastated by the virus, and that many in this country were caught off guard by the virus’s transmission among asymptomatic people.

Nursing homes needed to be closed earlier, testing needed to be more readily available, and better plans were needed to address staff shortages that materialized during the pandemic, she said.

State officials deployed National Guard technicians to long-term care facilities at the end of March as part of an effort to test all facility residents and workers across the state. But critics have complained that the program initially did not test workers and that facilities need repeated testing at regular intervals to control the virus.

A spokesman for the state’s COVID-19 Response Command Center said in a released statement that nursing home patients and staff are now required to be tested. The change came via an April 27 state funding plan that set aside $130 million for long-term care facilities.

The statement said Massachusetts has been a leader in testing at long-term care facilities, giving the state a clearer picture of the virus’s impact on those patients. As of Saturday, the National Guard has administered more than 28,000 tests at 525 congregate care facilities, the state said.

Of six other states with similarly sized nursing home populations, Massachusetts has administered the most tests overall, according to a Globe review.

In mid-March, before Massachusetts announced its first death from COVID-19, researchers at UMass Boston’s Gerontology Institute sought to examine how nursing homes with poor federal assessments for infection-control measures would fare during the outbreak. Researchers hypothesized that facilities with past problems and low quality rankings would need extra aid during the pandemic, Dugan said.

But researchers were unable to find a correlation following initial reports of outbreaks, suggesting even facilities with stellar track records would have a tough time fending off COVID-19.

Amid the pandemic, details on outbreaks within long-term care facilities have been sparse. Many homes shared limited information on their virus spread, and the state only began releasing the names of facilities with infections on April 20, amid growing public pressure. But more clarity may come soon.

On April 20, the Centers for Medicare and Medicaid Services, the top US regulator for nursing homes, announced the facilities must alert patients and families to COVID-19 outbreaks and report cases and deaths to the Centers for Disease Control and Prevention. The data will be reported weekly, but the federal government hasn’t said when it will start publishing the statistics.

The first major US outbreak of the virus occurred in February in a nursing home in Kirkland, Wash., which has been linked to at least 37 deaths. Washington state hasn’t publicly reported how many long-term care patients have been killed by coronavirus, the Kaiser Family Foundation said.

In New York, home of the deadliest COVID-19 outbreak in the United States, patients in nursing homes and “adult care facilities” made up about 20 percent of the state’s 18,909 virus deaths, according to figures released Friday.

The virus has also had an outsized grip on facilities outside the United States. Deaths in “care homes” — a term used for all non-acute residential and nursing facilities — accounted for at least half of all COVID-19 fatalities in Canada, Norway, Ireland, Belgium, and France, according to the International Long Term Care Policy Network

David C. Grabowski, a health care policy professor at Harvard Medical School, said the international data suggest Massachusetts isn’t an outlier, and that other states will also soon have a majority of their fatalities come from long-term care facilities.

“As Massachusetts goes on this issue so will the rest of the country,” he said.