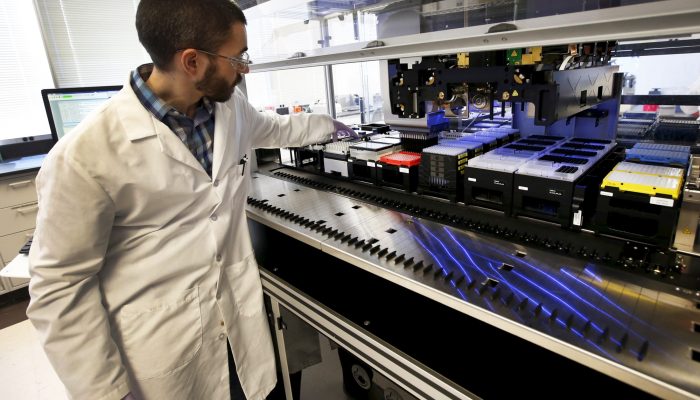 A technician at Regeneron Pharmaceuticals headquarters in Tarrytown, New York.

A rheumatoid arthritis drug made by Regeneron and Sanofi showed promise for treating the sickest coronavirus patients in a clinical trial but was not beneficial for patients with less-advanced disease, prompting the companies to stop testing the medicine in that group.

The drug, Kevzara, inhibits a pathway thought to contribute to the lung inflammation in patients with the most severe forms of Covid-19.

Regeneron and Sanofi started clinical trials of the medicine in Covid-19 patients in March after a small study from China suggested a benefit from a Roche drug, Actemra, inhibiting the same pathway, known as IL-6.

The drug is a different than the new antibody cocktail Regeneron is developing to treat Covid-19, expected to enter clinical trials in June.

The results reported Monday showed patients characterized as “severe,” those requiring low levels of oxygen supplementation and who weren’t on ventilators, got no benefit from Kevzara in the trial — and in fact, appeared to do worse in the earlier, phase 2, part of the study. The phase 3 results in those patients showed the drug appeared to have no effect.

Sicker patients characterized as “critical,” who required mechanical ventilation, high-flow oxygen or treatment in intensive care, did show a benefit from Kevzara compared with a placebo, particularly at a higher dose.

As a result, the companies are proceeding with a larger trial only in critical patients, testing the higher Kevzara dose against a placebo. Results from that trial are expected by June.

“There’s still hope here, but I would say we’re going in with eyes wide open, just as we went into first part of the study,” Dr. George Yancopoulos, Regeneron’s chief scientific officer, said in a telephone interview.

The results are among the first from a controlled clinical trial in the U.S. of a medicine for Covid-19. Yancopoulos said they demonstrate why running rigorous trials is crucial, even — and especially — during a pandemic.

“It shows how often these small, uncontrolled studies can be misleading,” Yancopoulos said. The trial in China that spurred the research was done in just 21 patients and didn’t include a placebo control. It enrolled both severe and critical patients with Covid-19. “It claimed, remarkably, with anti IL-6 therapy,” …  “those patients did really well,” Yancopoulos said.

The results of the Sanofi and Regeneron trial showed most of the patients characterized as severe recovered on their own with supportive care; 80% of severe patients in the trial, regardless of whether they were given Kevzara or placebo, were discharged. 10% died, and 10% are still hospitalized, the companies said in a press release.

“That may be the natural course of the severe disease,” said Yancopoulos. “The severe patients, on average, are going to have better outcomes than was previously appreciated; that’s a good message.”

But, he noted, “improving on that is going to be challenging for any drug.”

The phase 2 portion of the trial enrolled 457 hospitalized patients, evaluating 400 and 200 milligram doses of Kevzara compared with a placebo. Phase 3, already ongoing, has more than 600 patients in the critical group and is continuing to enroll new patients.

The studies were partially funded by the Department of Health and Human Services, Office of the Assistant Secretary for Preparedness and Response and the Biomedical Advanced Research and Development Authority.

Separately, Regeneron continues to forge ahead with its newly developed antibody therapy for Covid-19, with plans to start clinical trials in June. Yancopoulos said the company will test the medicine to prevent Covid-19 and to treat it in early and later stages of disease.

“Most of the time when you’re developing an approach that has a track record, is specifically tailored [to the disease] and is based on science that’s been proven to work in your own hands, you put more hope on that than something that was done just on anecdotal reports,” he said.

About whether Kevzara will prove to be helpful for the sickest Covid-19 patients?

About the Author: Meg Tirrell