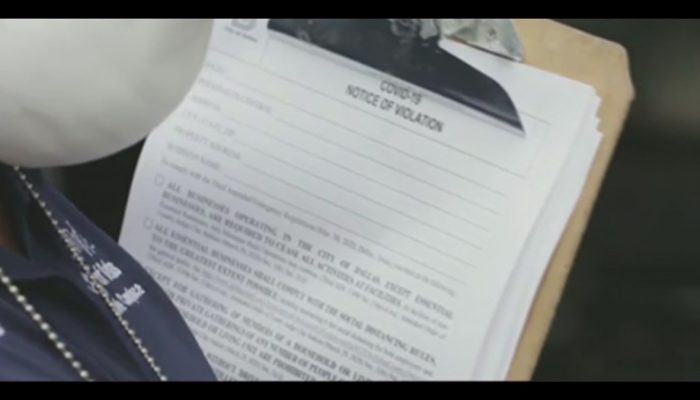 
Cities and counties in North Texas asked for voluntary compliance Friday as some coronavirus restrictions were lifted.

Revised orders from Texas Gov. Greg Abbott allowed restaurants to reopen with 25% capacity. But officials said code enforcement will only answer complaints about violators with no random inspections.

“Enforcement is left up to the private businesses according to the order,” Dallas Mayor Eric Johnson said.

“I want us to make sure that we are being a good partner to the Governor and to the state in making sure that we help our businesses comply with the order, but doing so in a way that of course, emphasizes safety to our residents.”

To enforce the tougher coronavirus restrictions that expired Thursday night, the City of Dallas assembled a team of nearly 200 people from several departments.

As of Friday, they had answered more than 18,000 complaints the past two months, but only issued 20 citations. At the same time, the city budget is facing a $25 million current year shortfall as the result of no sales tax collections from all the closed businesses.

The focus on coronavirus enforcement has come at the expense of other problems according to some city council members.

“We need to get back to the business of cleaning up our communities because we run the risk of some serious health issues,” Arnold said.

“Our code officers need to be returned to the community.”

Councilman Omar Narvaez
said seniors in his district who were told to stay indoors have received notices
for high grass while illegal dumping nearby was overlooked.

“And to me that is the
priority, not the grass getting cut at that very moment in these times that we’re
having,” Narvaez said.

“We hope to capitalize on the high level of voluntary compliance we’re getting with these orders so we can reassess the focus and the effort from code,” Fortune said.

“I don’t know if we’re quite at the point where we would want to pull all of those resources just yet.”

The City of Dallas received $234 million from the federal government for resident and business assistance and other support. But so far none of that money can be used to cover the city’s COVID-19 related expenses. City officials have been asking to change that.

“We have to look out for the taxpayers of Dallas. So I want to make sure that we are getting the help that we need from Washington, from Austin,” Mayor Johnson said.

Friday the Mayor and the Chairman of that City Council Committee sent a letter to the City Manager and City Attorney requesting a review of code enforcement priorities and policy.