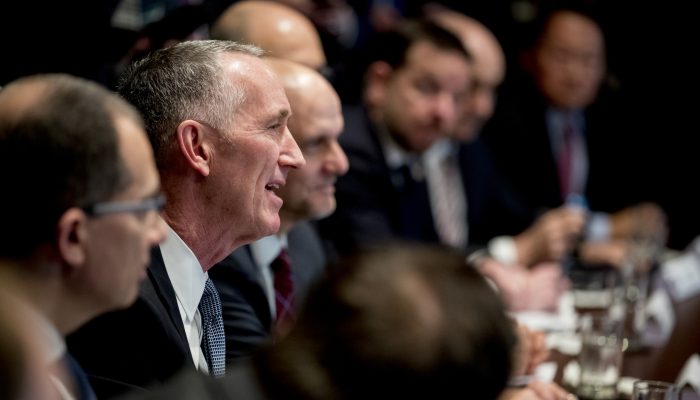 
Gilead Sciences CEO Daniel O’Day speaks at a meeting with President Trump and members of the White House coronavirus task force on March 2.

Gilead Sciences CEO Daniel O’Day speaks at a meeting with President Trump and members of the White House coronavirus task force on March 2.

Gilead Sciences, the drugmaker behind the experimental COVID-19 treatment remdesivir, spent more on lobbying Congress and the administration in the first quarter of 2020 than it ever has before, according to federal filings.

The pharmaceutical company spent $2.45 million on lobbying in the first three months of the year, a 32% increase over the $1.86 million it spent in the first quarter of 2019.

The first quarter is also when Congress drafted and passed the Coronavirus Aid, Relief and Economic Security Act, which contained numerous provisions affecting the pharmaceutical industry, including funding for the development of vaccines and treatments in response to the pandemic.

Early drafts of the legislation included a provision stipulating that COVID-19 vaccines, drugs and tests be affordable if they were developed with taxpayer funds. But the final bill included additional language that undercut that requirement.

The lobbying spike also coincided with Gilead’s ramping up clinical testing of remdesivir, an antiviral drug that has become the most closely watched COVID-19 treatment under development.

On Friday, the Food and Drug Administration authorized the emergency use of remdesivir for patients hospitalized with severe cases of COVID-19. The move would make it easier for patients to receive the intravenous medicine. But the remdesivir supply is limited and Gilead said the U.S. government will coordinate its distribution to hospitals in cities most affected by COVID-19.

“The data shows that remdisivir has a clear-cut, significant, positive effect in diminishing the time to recovery” from COVID-19, said Anthony Fauci, director of the National Institute for Allergy and Infectious Diseases, about a study his institute sponsored. He said the drug would become “the standard of care.”

The same day, however, a study by Chinese researchers published in The Lancet found remdesivir didn’t do better than a placebo when treating seriously ill COVID-19 patients on such measures as survival and time to clinical improvement.

Gilead says its lobbying expenditures increased sharply last quarter because in 2019, the company joined the trade group PhRMA, or the Pharmaceutical Research and Manufacturers of America.

A portion of annual membership dues expected to go toward lobbying is typically added to first quarter lobbying disclosures, and this is the first year Gilead is paying dues for the full year, said company spokesman Chris Ridley. He said “nearly all” of the additional $590,000 over its first quarter 2019 lobbying went toward PhRMA dues. PhRMA declined to comment on this statement.

PhRMA is considered one of the most influential trade groups on Capitol Hill, sending 183 lobbyists to advocates on the industry’s behalf last year as Congress debated drug price bills that eventually stalled, according to the Center for Responsive Politics, a nonprofit that tracks campaign finance and lobbying. And the trade group’s members spent even more.

“They see dollar signs ahead and they don’t want the federal government to get in their way,” says Ben Wakana, executive director of Patients for Affordable Drugs, an advocacy group. He said that he suspects Gilead is laying the groundwork to push back against congressional attempts to control the prices of COVID-19 drugs.

Rep. Jan Schakowsky, D-Ill., says Gilead’s track record makes her worry that remdesivir could be priced out of reach if the Food and Drug Administration clears the way for it to be used for COVID-19.

“We have seen one after another of these drugs come on the market, which are fantastic, and except that they end up being out of reach for most consumers,” she said in an interview with NPR. “We cannot tolerate as human beings, as Americans, for this to be an opportunity now for price gouging.”

Gilead’s pricing of past drugs has drawn criticism. When it launched its hepatitis C cure in 2013, the cost was $1,000 a pill.

And the company is in a legal battle with the federal government over patents for Truvada, an HIV medicine the FDA also approved for use in protecting people at high risk of infection.

Truvada has a list price of more than $22,000 a year, according to GoodRx, a website that helps patients get discounts on drugs. The price has kept many patients from getting access to the drug, patient advocates say. The issue prompted a congressional hearing last year.

Gilead is donating the first 1.5 million doses of remdesivir, but the company has declined to say what remdesivir’s price might be after that. During a conference call with investors on Thursday about first quarter earnings, analysts asked Gilead CEO Daniel O’Day whether they could expect similar returns on remdesivir as they’ve seen with the company’s other products.

“There is no rulebook out there, other than that we need to be very thoughtful about how we can make sure we provide access of our medicines to patients around the globe,” he said on the call. “And do that in a sustainable way for the company, for … shareholders, and we acknowledge that.”

Taxpayers helped fund research for remdesivir and other potential vaccines and treatments, so Schakowsky added a line to the CARES Act to make sure drugmakers don’t set exorbitant prices.

“The line in the bill essentially said that any drug that was made with any money from taxpayers would have to have reasonable pricing,” she said. But, she added, a problem arose when another line made its way into the final bill that undercut the pricing assurance. It reads: “The [Health and Human Services] Secretary shall not take actions that delay the development of such products.”

During a House Committee on Energy and Commerce hearing in February, Schakowsky asked Health and Human Services Secretary Alex Azar to promise that coronavirus treatments would be affordable for everyone. He declined, and told her, “We can’t control that price because we need the private sector to invest.” Azar is a former executive of pharmaceutical company Eli Lilly & Co.

“It seems to me then that we are in a hostage situation if that’s the view of the federal government and the people in charge,” Schakowsky said. “If this is what they want to extract from consumers in order to cure it, it’s immoral. And it will end in a lot of deaths because people won’t be able to afford their drugs.”

Both Gilead and PhRMA declined to say whether they pushed for the CARES Act wording that barred HHS from doing anything that would delay product development.

As for pricing of COVID-19 treatments, the company and the trade group say they’re mindful of concerns.

“We’ve publicly committed that, should remdesivir be proven safe and effective, we are committed to making the medicine both accessible and affordable to governments and patients around the world,” Gilead’s Ridley wrote in an email.

“Our industry is working around the clock to develop treatments and vaccines to address the COVID-19 public health crisis and save patients’ lives,” PhRMA spokeswoman Holly Campbell wrote in an email. “The industry’s priority continues to be making sure patients have access to safe, effective and affordable therapies.”

Pharmaceutical and health product lobbying has grown over time, hitting nearly $300 million in 2019, according to the Center for Responsive Politics. Spending can also be cyclical, depending on which bills are on the table, says Tim LaPira, an associate political science professor at James Madison University.

Companies may ramp up lobbying to put on a “charm offensive” because of ongoing litigation or an upcoming merger, he says.

“It makes sense for a company to temporarily ramp up their lobbying as part of their bigger effort to, you know, quell the backlash,” LaPira says, adding that lobbying can also help streamline the regulatory process for a new product.

Gilead, AbbVie and Regneron are among the pharmaceutical companies that spent more on lobbying in the first quarter than they ever had in previous quarters, according to data from the Center for Responsive Politics compiled for NPR. They all are working on experimental COVID-19 treatments.

AbbVie’s HIV drug Kaletra is being studied in COVID-19 patients, and the company spent an additional $90,000 above its previous biggest lobbying quarter, for a total of $2.98 million in the most recent quarter. AbbVie did not respond to NPR’s request for comment.

Similar studies are also underway for Regeneron’s arthritis drug Kevzara. The company, which is also working on antibody-based treatments, spent $370,000 on lobbying in the first quarter, which is $30,000 higher than the last quarter of 2019, its previous highest quarter.

“Our lobbying spend in Q1’20 increased slightly over the prior quarter due in part to increased interactions with various government agencies around the COVID-19 pandemic and our work to develop a treatment/preventative approach,” Regeneron spokeswoman Alexandra Bowie wrote in an email. “In terms of pricing, we are working hard to beat COVID-19 and make treatments that are affordable and accessible.”