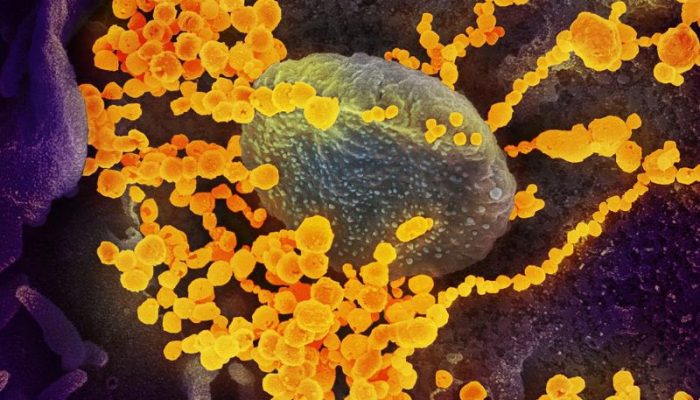 This scanning electron microscope image shows SARS-CoV-2 (round gold objects) emerging from the surface of cells cultured in the lab. Credit: NIAID-RML.

A preclinical study in the US found that Gilead Sciences’ antiviral drug candidate remdesivir prevented disease progression in rhesus macaques monkeys with Covid-19.

The animals were infected with the novel coronavirus, SARS-CoV-2.

Data announced by the National Institutes of Health (NIH) revealed a significant decrease in clinical disease and reduced lung damage in monkeys treated with the investigational antiviral drug.

The preclinical study involved dosing and treatment procedures being used in a clinical trial of remdesivir to treat hospitalised Covid-19 patients. NIH’s National Institute of Allergy and Infectious Diseases (NIAID) is leading the trial.

In the preclinical study, one group of monkeys were given remdesivir while the second group acted as an untreated comparison arm, both infected with the novel coronavirus.

The treatment group was administered a dose of intravenous remdesivir 12 hours after infection, followed by a daily intravenous booster dose for the next six days.

According to the NIH, initial treatment was given shortly before the virus reached its highest level in the lungs.

Also, the amount of virus in the lungs was lower in the treatment group compared to the untreated animals. The findings also showed that the virus led to comparatively less lung damage in treated animals.

Findings from the study have been posted on the preprint website, bioRxiv.

According to investigators, the results indicate that early initiation of remdesivir treatment in Covid-19 patients could result in maximum treatment effect.

Furthermore, scientists said that remdesivir helped prevent pneumonia but did not mitigate virus shedding by the animals.

A statement from the team said: “This finding is of great significance for patient management, where a clinical improvement should not be interpreted as a lack of infectiousness.”