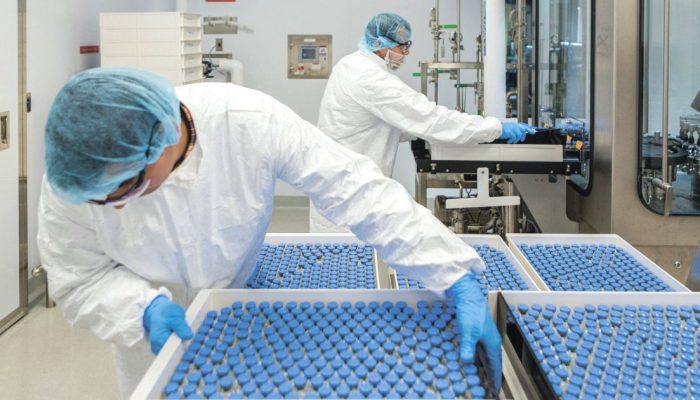 
An antiviral drug developed in the United States as a treatment for Ebola has emerged as a potentially significant tool in treating COVID-19, the disease caused by the new coronavirus.

On Friday, the US. Food and Drug Administration approved the emergency use of remdesivir in hospitalized patients with “severe disease,” such as those experiencing breathing problems requiring supplemental oxygen or ventilators. The decision came after clinical trials in the United States and Europe showed positive results.

Full FDA approval is still a long way away, but the emergency provision lets hospitals administer the drug to patients with the most severe cases of the coronavirus. In Israel, experts say, it will take a long time before remdesivir is authorized for use.

But last week, Dr. Anthony Fauci, the head of the U.S. National Institutes of Allergy and Infectious Diseases and an adviser to President Donald Trump, said a study of over 1,000 patients showed it had “a clear-cut, significant, positive effect in diminishing the time to recovery.” Patients who took remdesivir recovered from COVID-19 in an average of 11 days, versus 15 for those who received a placebo.

The difference in the death rate between the two groups was not statistically significant, however – 8% for those who took remdesivir, compared with 11.6% for the placebo – a 31% difference that Fauci said “isn’t a knockout.”

The announcement was controversial because the results were released before a full study had been completed and subjected to peer review, in accordance with standard practice in medical trials. The data came from only half of the 1,063 patients in the study.

Critics said the touting of remdesivir was another case of the U.S. government jumping the gun on a treatment whose efficacy is far from proven, as happened with the antimalarial treatments chloroquine and hydroxychloroquine.

“Clearly everyone would like to believe the Americans, but we’re waiting to see the complete results, for example if the control group and the experimental group were the same, whether participants were given other medications and so forth,” said Prof. Miriam Weinberger, chairwoman of the Israeli Society for Infectious Disease and head of the s infectious diseases department at Yitzhak Shamir Medical Center (formerly Assaf Harofeh).

“In any case, the impression we have is that even if the drug shows its efficacy, it won’t be dramatic. It’s not a wonder drug,” she said, adding that more complete results would only be released in another two or three weeks.

In Israel, remdesivir was used several times as part of trial or in compassionate use, that is, for patients with serious illness and no other treatment options.

In the next few days, Israel is supposed to join a World Health Organization trial involving scores of countries to examine the effectiveness of different drugs and therapies against COVID-19, including remdesivir.

In Israel, the subjects are coronavirus patients over age 18 being treated in hospitals. They will be selected randomly to be given one of four options – remdesivir, hydroxychloroquine, chloroquine and Kaletra (lopinavir/ritonavir, used for the treatment and prevention of HIV/AIDS) – as well as a control group that will get what is now the standard treatment.

As it turns out, Israel may no longer have enough coronavirus patients to participate in the study. “We got started two weeks ago, but since than everything has changed,” said weinberger.

Even if remdesivir is approved after showing widely accepted positive results, that doesn’t mean it will be available in quantities to treat large numbers of COVID-19 patients.

‘Israel won’t get a gram’

“Israel won’t get a gram” of remdesivir, said Weinberger. “The whole world will compete with us for orders. The Health Ministry expects that once any successful drug is approved, Israel will have to compete with much more powerful and richer countries. We won’t be first in line.”

Gilead said it is expanding production to 1.5 million doses of remdesivir a day by the end of May, enough for 210,000 treatment courses. It says it hopes to get the latter figure up to 1 million by the end of the year.

“We’re going to make sure that access is not an issue with this medicine,” Gilead CEO Daniel O’Day told the health-news website STAT last week. “This is a global pandemic. There should be no question about our ability to get medicine in the hands of patients.”

But manufacturing an intravenous drug like remdesivir is a complex process. Many subcontractors are involved in producing a single vial and the final product has to be pure, sterile and consistent. It involves chemical processes that must be completed in an exact sequence and ends with a manual inspection of each vial.

Because development of a vaccine or medicine specifically for the coronavirus will take so long, there is a lot of interest right now in repurposing of existing treatments, or those now undergoing clinical trials, for use against COVID-19. Those repurposed drugs include hydroxychloroquine and chloroquine, which Trump promoted aggressively and that received FDA clearance for emergency use.

Israel rushed to fly in millions of chloroquine tablets, an achievement that Prime Minister Benjamin Netanyahu has expressed pride in. But trials haven’t clearly demonstrated its efficacy and in some cases led to heart problems. For that reason, the FDA has warned against its use outside of hospitals or clinical trials.

In Israel, by the way, chloroquine and hydroxychloroquine are a key component of the treatments provided in most hospitals, but in the last two weeks demand for them has waned. Other drugs that have shown promise are favipiravir and drugs such as tocilizumab, an immunosuppresant with an anti-inflammatory mechanism that is used to treat arthritis.

Another direction is to treat COVID-19 patients with blood plasma donated by people who have recovered from the disease. This approach is being studied in Israel.

“It will take years to develop a new drug for the coronavirus, which took the medical community by surprise and forced us in short order to decide how to treat patients,” said Weinberger.

“The results from important studies done with proper controls will be published in the coming days and weeks. In the meantime, we’re exercising common sense and resourcefulness, and hope we’ve acted correctly.”

The Associated Press contributed to this report.

About the Author: haaretz.com