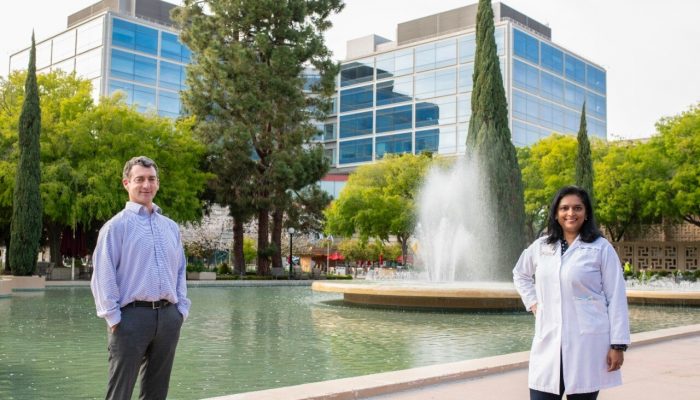 With no approved treatments for COVID-19, Stanford Medicine has joined large-scale clinical trials to determine if remdesivir, an experimental anti-viral medication, works.

In early March, when patients with the coronavirus started arriving at Stanford Hospital, a team of infectious disease researchers at the university put their heads together and made a quick decision. Among the potential treatments for COVID-19, the disease caused by the virus, their first choice to investigate was the experimental anti-viral drug remdesivir. They jumped right in.

Within a week, Stanford Medicine had joined a number of other medical centers around the world in global trials sponsored by Gilead Sciences Inc., the maker of the drug, which is not yet approved as a treatment for COVID-19. By the end of March, the infectious disease doctors had enrolled 30 patients who were receiving the drug intravenously. In addition, another group of Stanford scientists began enrolling participants in a similar, large-scale clinical trial of remdesivir, this one sponsored by the National Institutes of Health.

“We brought this on fast,” said Aruna Subramanian, MD, clinical professor of infectious disease and co-principal investigator of the Gilead trials at Stanford. “We got everything together in a week and were ready to roll. This was record time. This type of thing normally takes two to three months to get on board.”

During normal times, a phase 3 clinical trial—the final step in the process of drug approval—typically takes months of planning, after years of research, before it’s underway. But these aren’t normal times. With a fast-moving pandemic bearing down and no approved treatments available, researchers are, like everyone else, desperate for answers, and they have ramped up their efforts to find solutions. Remdesivir jumped to the top of the list of potential treatments in part because it was farthest along in the approval process, Subramanian said. By the end of February, as the virus spread in the United States, there were at least five clinical trials of remdesivir underway. China initiated the first two studies in February, followed by the Gilead trial and the NIH trial the same month. By the end of March, Gilead, which is sponsoring two trials—one for severe and one for moderately ill patients—had expanded to 100 testing sites both in the United States and abroad, and the NIH trial had expanded to 60 sites, 50 of those in the United States.

Gilead recently reported that it is expecting to have preliminary data from the study of severe patients by the end of April. The two studies in China, though, were halted due to lack of patients. “We urgently need a safe and effective treatment for COVID-19,” said Anthony Fauci, MD, the director of the National Institute of Allergy and Infectious Diseases, in a press release announcing the start of the NIH’s remdesivir trial. “A randomized, placebo-controlled trial is the gold standard for determining if an experimental treatment can benefit patients.” That same month, while speaking about the coronavirus, Bruce Aylward of the World Health Organization announced, “There’s only one drug right now that we think may have real efficacy, and that’s remdesivir.”

There are multiple reasons for remdesivir’s current reputation as a potential treatment for COVID-19, among them the anecdotal stories that have appeared in the media. While the drug is not commercially available, it is being used to treat patients with COVID-19 through a compassionate care program on a case-by-case basis, with approval from the Food and Drug Administration. In late January, reports out of Washington State that the first person in the nation diagnosed with COVID-19 had been treated with remdesivir, and recovered, made headlines. But scientists are quick to warn against basing treatment guidelines on anecdotal evidence and reports in the news media.

“We have had patients hospitalized at Stanford who got remdesivir under compassionate care guidelines,” said Stanley Deresinski, MD, associate chief of the division of infectious diseases at Stanford. “Some got better. Some got worse. At this point, we just don’t know. We hope to have results soon for remdesivir, and by then we should have another trial in the works for the next best thing.”

At Stanford, the team of infectious disease scientists running the Gilead trials say that, like other scientists, they picked remdesivir as their first choice based on promising results from years of lab and animal research. Often referred to as the Ebola drug, remdesivir was also previously tested in a clinical trial for treating that disease. It failed to show that it was effective for Ebola in comparison with two other drugs, but based on the study, it’s generally known to be safe in humans, said Philip Grant, MD, assistant professor of infectious diseases at the School of Medicine and co-principal investigator of the Gilead trial.

For years, remdesivir has shown potential in cell cultures and animals infected by other coronaviruses, such as SARS and MERS, said Robert Shafer, MD, professor of medicine at the School of Medicine, whose lab recently created a coronavirus anti-viral research database. “Remdesivir looks very good in the lab. In cell cultures, it’s also been more active in fighting the coronavirus than other drugs. That’s why I think it’s promising. I’m looking forward to seeing what the clinical trials show.”

A coronavirus infection occurs when the germ enters the body’s airways through the nose, mouth or eyes, then lodges in the cells in the lining of the lung’s airways, where it quickly starts to make millions of copies of itself, wreaking havoc on the lungs, Subramanian said.

The virus makes copies of itself by inserting its own genes into the human cell’s genetic machinery, basically hijacking the replication process of the human cell. Remdesivir, like other anti-virals, is designed to target the system the virus uses to replicate, acting as a cap that prevents the virus from making new copies of itself or infecting other cells. Whether this works in people to reduce symptoms of COVID-19 or shorten the length of the disease is not known yet.

“We need the data, the scientific rigor of doing randomized clinical trials,” said Robert Harrington, MD, the Arthur L. Bloomfield Professor in Medicine and chair of the department of medicine at Stanford. “That’s how clinical science and patient care advances. We can’t depend on anecdotal stories in order to practice the best clinical medicine. We have to wait for the science.”

But scientists around the world aren’t standing still, waiting for the results of remdesivir trials. All kinds of studies are moving ahead at breakneck speed to find the next best treatment or vaccine for the disease.

“A variety of drugs have been suggested,” Deresinski said. “Hydroxychloroquine has been known for 50 years to have nonspecific anti-viral properties. But for now, remdesivir is our preferred agent.”

The anti-malarial drugs chloroquine and hydroxychloroquine also have made headlines as potential treatments for COVID-19. The drugs are currently used off-label in certain cases to treat the disease. But with only a few anecdotal studies showing benefits, they have not received approval from the FDA for COVID-19. Reports have warned of dangerous side effects that need to be studied before widespread use. Recently, a small study of chloroquine in Brazil was halted for safety reasons due to high doses causing irregular heart rhythms. “Chloroquine is being used a little bit too widely without proper study,” Subramanian said, adding that there’s also a growing concern that stockpiling and hoarding of the drugs are limiting supplies for people with lupus and rheumatoid arthritis who are prescribed the medication. “We prefer to be data-driven as much as possible.”

The next step for FDA approval of these anti-malarial drugs to treat—or prevent—COVID-19 depends on data-driven evidence from similar large-scale clinical trials, some of which are currently in the planning process. Whether chloroquine is Stanford’s next best guess for potential treatment, though, is still up for debate.

“Ours is an adaptive trial, which means that if remdesivir doesn’t work, we can quickly move on to testing the next, most promising drug without any gap in time,” said Neera Ahuja, MD, principal investigator of the NIH-sponsored remdesivir trial at Stanford and chief of the division of hospital medicine. She is working with Kari Nadeau, MD, Ph.D., professor of medicine and of pediatrics, and others on the project.

“We’re hopeful about remdesivir, but we are already planning for what the next drug might be,” Ahuja said. “We want patients to get any possible treatments that might benefit them as soon as possible.”