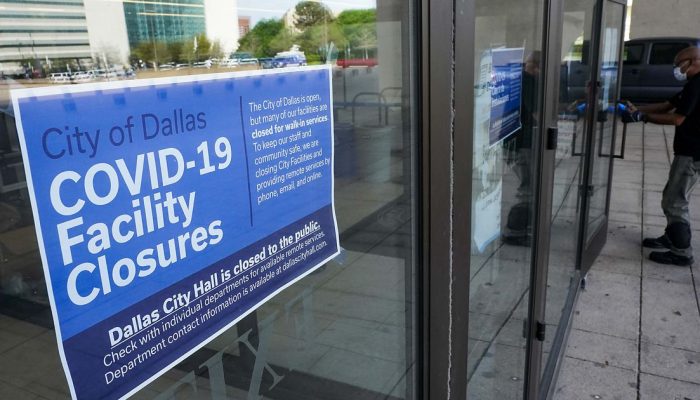 
This story is developing and will be updated.

That’s what City of Dallas residents trying to get pre-screened for the city’s rent or mortgage assistance programs had to do over and over again before being able to begin the application process.

Within an hour of Monday’s 9 a.m. launch, the pre-screening tool wasn’t loading or was booting users when they were most of the way through the application process.

The program intended to help residents financially impacted by the pandemic is being administered on a first come, first served basis. Dallas City Council approved about $13.7 million almost two weeks ago to help families making under 80% of the median income. A family of four, for example, would need to make less than $66,500 to qualify.

Up to 1,000 households were expected to receive aid. The City of Dallas did not immediately return a request for comment.

Officials did acknowledge the outage on social media as well as on the city’s site. “Due to high volume, the online application is experiencing slowness,” read a message on the city’s website.

Due to high volume, the online rental or mortgage assistance application is intermittently unavailable. We are working to get this resolved as quickly as possible. Please try back shortly. Thank you for your patience.

Dallas resident Carrie Morris was ready to file her pre-screening application at 8:59 a.m. She got through and started her application just a few minutes later only for the site to crash when she was about 80% of the way through.

When the pre-screening application loaded, it asked for basic details like how much she pays in mortgage and bills and what her household’s income is right now.

But it was 10:25 a.m. by the time she was able to submit the application, Morris said.

“If it’s first come first serve, then that’s an hour and a half after I first tried it,” Morris said. “Who knows? I could’ve been up toward the top of the line if my application hadn’t crashed.”

Dallas Mayor Eric Johnson’s office provided an update on Twitter: the program took in almost 1,000 applications within the first 15 minutes of launching and more than 1,500 by 10 a.m.

In first 15 mins, the system took in 936 applications.

IT is continuing to work to improve reliability of the website.

Miriam Garcia, a mother of three who was laid off in February from her job in insurance sales, had similar issues. The tool crashed on a part of the application asking her for her landlord’s information.

“I was about to give up and not do it, but I figured I might as well try because I’d been on there for 45 minutes,” Garcia said. “I filled it out once it finally loaded. I know it’s first come, first serve, but it’s worth a shot.”

Garcia said her husband, who worked in construction, was laid off due to the pandemic and both have been trying to find work but have had little luck. She said the family has been making payments by using the federal stimulus money and getting loans and help from family.

“If this doesn’t get approved, we do have some of the stimulus money left,” Garcia said. “We’re still waiting on unemployment benefits.”