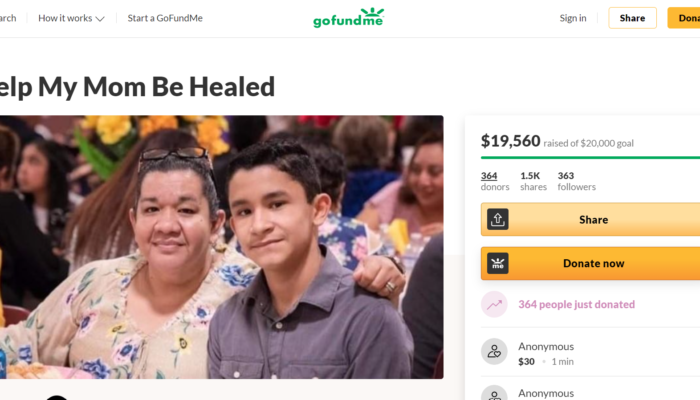 
A potentially life-saving treatment for his COVID-19-stricken mother is the only gift a South Texas teen is hoping to receive in time for his 15th birthday.

Emilian Sosa, a 14-year-old from McAllen, told Gov. Greg Abbott in a letter that the only family he has left is his mom, and she’s “hanging on for dear life” after spending the last month battling COVID-19. Erika Calderon, the teen’s mom, is the Emilian’s go-to for guidance, he wrote. Now, he’s watching her health deteriorate via Zoom. With no other options, Sosa is asking Abbott to help his mom receive extracorporeal membrane oxygenation therapy.

Sosa’s painful letter to Abbott was shared on Twitter by Naxi Lopez, a reporter for The Monitor in the Rio Grande Valley, on Tuesday.

Since the RGV does not have a hospital equipped to perform ECMO, Sosa is asking for help to transport Calderon to a larger city, like San Antonio, Houston or Dallas for a better chance at survival.

“Her lungs have not been able to recover because the virus damaged them too severely,” the teen wrote. “At this very moment, she is on a ventilator, hanging on for dear life, at the DHR Health COVID Unit in Edinburg, Texas.”

He said the treatment is her “only hope.” ECMO adds oxygen to a patient’s blood in order to give damaged lungs time to rest.

“My mother has worked diligently all her life to raise me,” Sosa wrote. “She is a hard-working single mother, and she is the only family I have left.”

Sosa is relying on Zoom calls to help keep his mom motivated by playing hymns and violin, but he is watching her condition worsen, he wrote.

Neither Sosa nor Abbott’s press office were immediately available to comment, but Lopez tweeted that she was in communication with both Tuesday night. Twitter users keyed into the story asked how they could help Sosa. She pointed to a GoFundMe fundraising campaign which is just $500 shy of the $20,000 goal to airlift Calderon to a larger city. The funds were raised in less than 24 hours.

Lopez updated Twitter again on Tuesday, saying she spoke to the governor’s office and Sosa “might just get the help it needs.”

San Antonio, the closest option to Sosa and his mom, has seen a decline in hospitalization rates recently. Though the number of admitted patients are decreasing, more people are hospitalized now than they were during the summer surge. During these spikes, already highly limited resources like ECMO are stretched thin. Patients must qualify and an ECMO machine must be available. The high-risk therapy is typically reserved for patients who have the highest chance of survival, San Antonio Express-News reporter Lauren Caruba told mySA.com.

Caruba pointed to a case of a 42-year-old woman who was unable to receive ECMO treatment because of unavailability during the summer surge. That patient died.

Despite the hurdles, Sosa is giving his all to fight for his mom to survive. He pleaded with Abbott to make his request a reality by his birthday on Feb. 1.