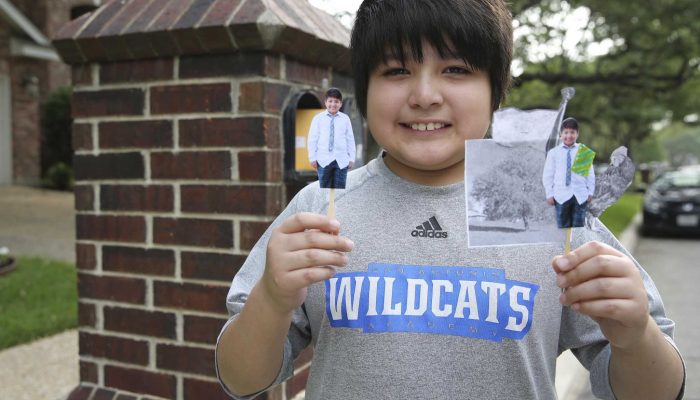 
Because of the coronavirus pandemic, Cooper Walther, 9, and his parents likely won’t be able to take a far-flung family vacation this summer.

Instead, his mother is sending him all over the country.

A flat version of Cooper, that is.

Mom Barbie Walther, a longtime educator, is using a well-known literacy project based on a beloved children’s book series to help fill her son’s summer hours with fun — and something educational to boot.

The Flat Cooper Project features a cut-out photo of her son affixed to a cupcake topper — think Popsicle stick — that is sent to friends, family and even strangers living in each of the 50 states, accompanied by a letter instructing them to do certain things.

The letter asks the recipient or “host” to take a photo of stick-form Flat Cooper in front of a famous landmark in their state (virtually, if need be.) Maybe add an article of clothing or accessory that Flat Cooper might need when visiting the state. Take a photograph or videotape yourself as you “teach” Cooper facts about the state, then tag them to Cooper’s Instagram page: The_Flat_Cooper_Project.

Recipients are asked to also send photos or videos to flatcooperproject@gmail.com. And to send a letter back with Flat Cooper holding a state flag, state bird, state tree or any other accessory related to the state.

Barbie said so far, 15 recipients have sent back packages and letters, and the Instagram account is filled with great videos and photos posted by participants in the project.

Flat Cooper has traveled far indeed. Here he is “posing” in front of Elvis Presley’s home at Graceland in Memphis. Feeding cows at a farm in Wisconsin. Riding horses in California. Hanging out at a balloon festival in Albuquerque. Standing in front of a buffalo statue in Cheyenne, Wyo. Admiring the public gardens in Boston.

Cooper, standing (in person) in front of the mailbox at his Northwest Side home on a recent morning, said being able to travel the country in paper form, and having so many people respond, has been a gas.

Each time he sends a batch of letters, his mother videotapes him announcing that week’s slate of states, which also gets posted on Instagram and Facebook.

Barbie said she and husband, Christopher, were thinking about renting an RV and traveling the country with their only child this summer. Then the virus hit. The Flat Cooper project will help fill the void.

“I thought it was something creative we could do together during COVID,” said Barbie, an educational consultant who taught school for 20 years and was program manager of SAReads, a literacy program, until she was furloughed during the pandemic.

On ExpressNews.com: San Antonio nonprofits struggle during the pandemic

Author Jeff Brown published the first Flat Stanley book in 1964. It tells the tale of Stanley Lambchop, who accidentally gets squashed flat by a falling bulletin board. He survives and goes on to have many excellent adventures in flattened form, chronicled by Brown and other writers.

The Flat Stanley Project was created in 1995 by a third-grade teacher in Canada. Over time it grew to include classrooms around the world, with students doing letter-writing projects and related work built off the theme of Flat Stanley traveling around.

Barbie posted the idea of the Flat Cooper Project on her Facebook page and Instagram account. At first, just friends responded, but as word spread, even strangers joined in. Cooper has sent letters to people in all 50 states.

An 80-year-old woman in Virginia, who isn’t on Facebook or any other online medium, actually created a postcard out of a photo, showing the Virginia state flower with Cooper superimposed on it, and mailed it to them.

Barbie said they aren’t going to open all the missives and packages coming in the mail right away. They’ll spread them out to give Cooper something to do each week over the summer.

On ExpressNews.com: Helping kids cope during the coronavirus

Cooper is keeping a journal of his adventures and will regularly update his Instagram account. He’s also keeping track of his travels on a large map in his bedroom.

On that recent morning, Cooper, wearing his San Antonio Academy Wildcat T-shirt, opened the package from a former preschool classmate who now lives in Rhode Island.

Inside, the flat photo of Cooper had been augmented with pictures of a beach towel, red chicken (the state fowl), a maple tree (the state tree) and the Rhode Island flag.

Best of all: A packet of Del’s Lemonade, the unofficial state summertime drink.

Being flat has its advantages.