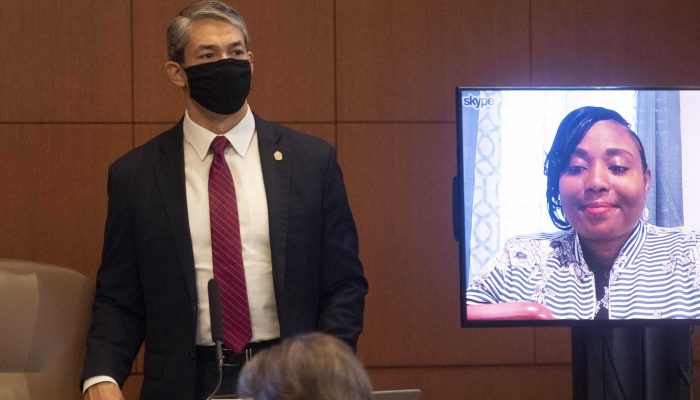 
City Council extended San Antonio’s stay-at-home order to June 4 ahead of a new wave of reopenings this weekend — but it remains unclear whether city officials can enact greater restrictions than the state if San Antonio sees a spike in novel coronavirus.

Council members approved the extension by a unanimous vote at their Thursday meeting.

Gov. Greg Abbott has increasingly stripped cities and counties of their ability to put in place their own restrictions to limit the spread, taking it upon himself to set the pace of business reopenings. Until recently, Abbott had given local govnerments a lot of room in figuring out restrictions.

District 3 Councilwoman Rebecca Viagran asked whether cities can extend their own orders if Abbott allows his to expire. That depends on whether Abbott says they can, City Attorney Andy Segovia said.

On ExpressNews.com: Testing for novel coronavirus speeding up in San Antonio

Abbott has taken a “more thoughtful approach than we’ve seen in other places around the country” when it comes to reopening, Mayor Ron Nirenberg said. He pointed to carveouts that Abbott made for El Paso and Amarillo to allow them to reopen businesses at a slower pace. Each had spikes in novel coronavirus cases.

Nirenberg pointed out that the city’s COVID-19 case figures — including hospital capacity and the time it takes for the number of local cases to double — look good.

“In the event that goes in the wrong direction, we’re going to have a very candid conversation with the governor,” Nirenberg said.

With nearly every kind of business now allowed to reopen, District 10 Councilman Clayton Perry questioned whether the city’s instructions to residents to stay home unless they’re essential workers or buying groceries or gas is misleading. He pushed city officials to consider changing the name of the order from “Stay Home, Stay Safe,” a move Nirenberg said he was open to doing.

“We’re still hanging onto this stay-at-home order,” Perry said. “I think that’s creating some confusion out there.”

But others pointed out the contradiction is on Abbott, whose own order still requires people to stay home unless it’s absolutely necessary to go out.

“I really believe the confusion is at the level of the state,” District 7 Councilwoman Ana Sandoval said.

The city’s order previously required residents to wear masks in settings such as grocery stores and pharmacies where keeping 6 feet of social distance from others is difficult. But Abbott forbade cities and counties from imposing penalties for any violations.

Now the city’s latest order changed to “strongly encourage” residents to wear masks under its order.

The city also no longer requires businesses to provide face coverings and masks to their workers if they reopen. Attorney General Ken Paxton told the city and county last week that doing so was in violation of Abbott’s directives.

Starting Friday, restaurants may allow more customers to dine in, up to 50 percent of their allowed capacity, Abbott decided this week.

Abbott’s order allows libraries to reopen at 25 percent capacity, but San Antonio has not reopened its libraries yet. City Manager Erik Walsh told council members he intends to lay out a plan to reopen them by the end of next week.

Separately, City Council also voted to allow CPS Energy to waive late fees for residents who are on payment plans for the length of the COVID-19 pandemic. San Antonio Water System has already done so.